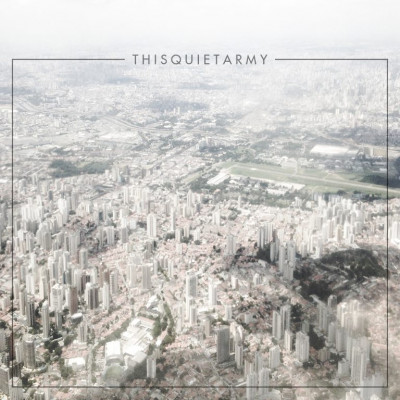 Metamorphose / Democracy Of Dust by thisquietarmy

Montreal’s thisquietarmy is the ambient, drone, experimental project of Eric Quach. Throughout his 26 full-length releases (some of which contain collaborations with other artists, this number however, does not include his EP releases), Quach builds sound structures that range from ambient drones, to dreamy shoegaze, to fuzzed out noise, and so on. It’s very hard to pin down a genre for thisquietarmy (which I love about his music), because each release is different in one form or another. His two releases this year (2017) are drastically different than his previous 24 full-lengths, in a very inspirational way. I’d like to call Quach a musical architect, especially after reading a quote at one point mentioning that music is like frozen architecture. Quach starts with an idea and then builds layers upon layers to create sonic structures (songs) the same way an architect starts with a blueprint and does the same with a physical structure.

Recently, I spoke with Eric about how excited I was to see him perform at Dunk!USA in October, and how I really would love to review his newest release Democracy Of Dust. He asked me if I would be willing to write a double review for his February 2017 release Métamorphose (Label: Grains Of Sand), and his July 28, 2017 release Democracy Of Dust (Label: Midira). I told him that I would be very glad to do that and I became even more excited when he said that Democracy Of Dust takes a very different approach than his previous releases and how special of a record it is for him. Once he told me this, I was very eager to hear what the newest release sounded like, especially since Métamorphose took a completely different approach than past material of his. Once I heard Democracy Of Dust, I knew exactly what Quach meant when he told me it was a very special album to him.

I will start out by digging deep into Métamorphose though, since it came out earlier in the year and is a very long record (a double record containing 2 hours of music). The album and song names were inspired by a poem written by Meryem Yildiz. It begins with “Métamorphose I: Le temps, la lumière”, which begins by building up slowly and leading into crushing, heavy infused drones, then gradually getting slower again over the course of 13 minutes. The delicate ending leads right into “Métamorphose II: Toujours ce rappel de l’éphémère” without a break in between tracks. The drone begins with a very peaceful atmosphere, while every now and then you’ll hear swells of deeper fuzz, which eventually take over the more ambient atmosphere at full force, building a sonic wall of sound. More than halfway into the track, a completely new tone enters, which builds on what is already very complex and textural. There is then a very long fade out, which sort of allows the listener to reflect on “Métamorphose I & II”.

Since this is a double review, I won’t go into an extensive description about “Métamorphose III – XII”, and also because “Métamorphose” is a 2-hour long double album in and of itself. I will say that each track is filled with layers upon layers of atmospheric, textural, fuzzy, pummeling, and beautifully crafted drone guitarscapes. There are also no drums anywhere on this 2-hour long journey. With each listen, you will hear something new, especially since there are so many sounds for one to hear. I would say that it is practically impossible to hear every single sound in one take. This is what makes Eric Quach such a brilliant and sonically artistic genius. “Métamorphose” is a very unique and innovative masterpiece, and shows the maturity and progression in Quach’s compositions. It takes a very different approach to the rest of thisquetarmy’s extensive catalog, that is until he told me about “Democracy Of Dust”.

“This album is a bit special and a bit of a departure…more like a parenthesis though. I was experimenting with synths in a studio and it became this”, Quach told me, referring to Democracy Of Dust.

During his residency at Dissenso Studio in São Paulo, while touring with São Paulo-based Labirinto, Quach and Muriel Curi recorded the Moog Little Phatty and Korg MS2000B synthesizers that Quach had been experimenting on (between February-March 2016). Once he returned home he recorded additional guitar tracks to layer in with the synthesizer recordings, finishing the recording and mixing at TQA.HQ, Montreal/Berlin (between September 2016-January 2017). The album was mastered by Brian Wenckebach at Electric Blue Studios, Brooklyn NY (January-2017).

The photography and artwork was designed by Quach, which features a birds-eye view of São Paulo. Photo treatment and conceptual input was done by Meryem Yildiz (whose poem was an inspiration for Métamorphose).

The tracks on Democracy Of Dust showcase a very unique mixture of drone/electronic sounds, which are polished with ambient textures and minimal beats. The album takes you on a journey through thisquietarmy’s innovative work, and shows signs of evolving and thinking outside of the box for idea, especially after such an extensive catalog. .

Returning to Midira Records, years after Alter Of Drone, with Democracy Of Dust, is very special, since the two albums are completely different and Democracy Of Dust is much more developed since Quach has had time to grow as a musician.