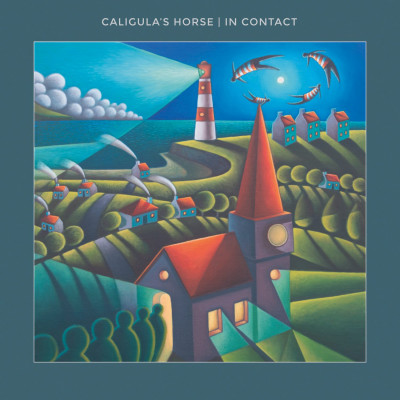 Having discovered Caligula’s Horse around three years ago, and with listening to each release, I found something endearing and unique about their take on progressive metal. Special care was taken to make the sounds original, and all the members gave their own flavours that were brought out in the final product. Having found capable hands in Adrian Goleby (guitars) and Josh Griffin (drums) to fill the spots left by original members Geoff Irish and Zac Greensill, the band has regrouped and launched their fourth album in the form of In Contact.

Clocking in at just over an hour, 2017’s version of the Australian five-piece is just as strong as ever, and are looking to show people that they’re still a major player in the prog ranks, which is apparent while listening to opening track ‘Dream The Dead’. The song is very confident and hard-hitting in it’s opening delivery, with a winding guitar solo which transitions into a melodic pace complimented by Jim Grey’s familiar pipes singing with precision. This song is a great way to start off the new album, with a playful back-and-forth of light and heavy segments, all showcasing the dexterity and talent of co-founder Sam Vallen’s ace guitar work with some beautiful solos.

Having already been familiar with ‘Will’s Song (Let The Colours Run)’ based on the band releasing this as their first single before unleashing the full album, I had extra time to digest it, which only helped to achieve more appreciation for the track. There’s some great syncopation with the instruments and an atmospheric quality at times with Grey’s soaring and majestic vocal work propelling the moods of the song. A great riffing push in the meat of the song pairs well with the airy moments. ‘The Hands Are The Hardest’ reminds me a lot of “Turntail” from their previous album. It goes along the same pattern (albeit in a somewhat lighter direction) while adding to that memories of the aforementioned song that I have, which is a big plus for me.

‘Love Conquers All’ makes a point of slowing things down by presenting a quick pseudo-electronic piece with a focus on atmospheric vocals. ‘Songs For No One’ shows off a more general drive than the previous tracks before it goes sparkly and bright near the end of the song before settling back into the main drive to finish up. Perhaps the band wanted to pull back a tiny bit with their energy and prog base so as to not overexert the listener? ‘Capulet’ definitely continues that trend in a simple and sweet acoustic number. The band’s pacing with the songs at this point is well done. They’re reminding us that they can go full-out when they want to, but can also dial it back and pull off some sublime and emotive song structures.  However, while ‘Fill My Heart’ plays out as beautiful songwriting (as usual), I was hoping the sound would pick up a bit after the previous three songs have given us somewhat of a stripped-down approach to their music. It’s only when the song is half-way over that it picks up a bit.

But fear not, the pace starts to get more aggressive in a non-musical way with ‘Inertia And The Weapon Of The Wall’. Grey rants on revolution, injustice and human nature in this passionate spoken-word piece. It’s very powerful and totally out of left field, which I welcome, and these impassioned words amp up the attitude necessary to switch gears for the final stretch of the album. This is evidenced in ‘The Cannon’s Mouth’, which shows that the prog-metal originality that the band pulls off so well is back, with all instruments gelling well.

Putting a bow on this album can only be done perfectly in my opinion with a memorable composition that pulls out all the stops, and I’m guaranteed that and more with ‘Graves’. Upon first glance, I got excited to see that the final track is over fifteen minutes, because the band are masters at letting the songs breathe and take you on a memorable ride. The opus is textbook Caligula’s Horse; a great progressive drive, melody and amazing riffage that push this epic into amazing and memorable territory (not to mention the tasteful and surprising saxophone work peppered in). All the twists and turns, and overall care taken in the songwriting gives me a huge sense of satisfaction knowing that the players wrapped up the album in the best possible way.

My only gripe with the album (if you can even define it as such) is that the pacing of the songs in the middle of album is a little bit more laid back than I was expecting. However, with that impression, I also got the distinct feeling of satisfaction knowing that the five-piece does their best to use every second of their compositions to their utmost with creativity. I get the feeling that with this release, the band has really got into a great groove with their songwriting. They never come across as boring or repetitive, or even really reminiscent of other bands, which is a huge plus. With the depth of their sound and maturation of their craft becoming cemented, I do think that this album could possibly have some commercial appeal over and above satiating their longtime fans appetites for the sound they’ve come to expect. I say that based on how well the band takes beautifully melodic moments and spikes it with a progressive flair that could really come across as different to outside listeners.

It’s also important to note that Jim Grey continues to be one of the premier vocalists in music today (metal or not), and he seamlessly lets his passionate voice propel each song. I truly feel that in some bands, vocalists can be replaceable, but in this instance, Grey continues to show how important his voice is at carrying the music to passionate directions that other singers couldn’t handle.

While to some listeners the band may have gone for a warmer sound in certain aspects of this record, it’s important to note that their overall songwriting approach has developed and progressed proudly. I dare say that repeated listens help to not only open up the album more, but to leave a lasting impression that will help set this album in a special place in their impressively solid discography.