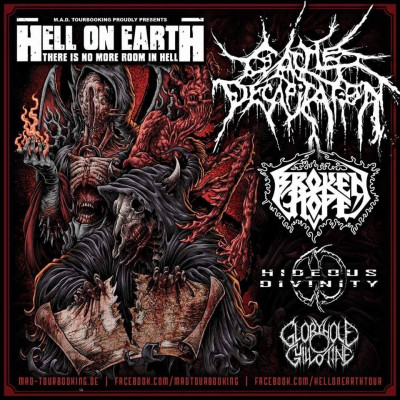 I rolled into Cardiff on the train early, and wandered around slightly lost; I’ve been to Womanby Street before but only in the dark, drunk, and following locals. It wasn’t complicated though, I got in the general area and accosted a gentleman in a fetching pink cut-off jacket with patches who appointed himself my guide. Nice one Eliot! His prediction was that it would be “interesting” given the venue is small and without a barrier. That sounded pretty standard to me, but then I’ve not seen Cattle Decap before. Seems they have a fair following round this way, and the locals already milling around were comparing stories of past gigs. I grabbed some food on the way and the place was full of kitsch Indian beach tat; among the ‘rules’ on the wall were two that seemed they may prove apt for the night ahead:

Outside the venue, apart from aforementioned milling locals, was a big red tour bus, washing hanging on the trailer. The bands were busy with prep and the mood subdued. I got my head the right way round and set about finding tour manager Erol to sort out the interview we had planned.  Main concern for them at that point was dinner, so I went for a stroll among Cardiff’s colourful street life and returned to have a chat on the bus with Josh from Cattle. Nice one Erol!

My grip on time is shot these days, and the schedule of the night was as hectic as the riffs to come, and as a result I missed Sodomized Cadaver while doing the interview. To make matters worse, they’re a charming bunch; so I must insist that you all immediately purchase their Vorarephilia EP off the SWEM bandcamp, and go see them at Fuel on the 15th and get there early. South Wales Death Metal, bruv.

Gloryhole Guillotine made me feel old, and there was a definite training-ground feeling as they got set in a still moderately warm and uncrowded room, with the big names of the tour sitting above them on the bill. Still, there was no ease-in to their set – grinding from the off, nicely fat sound without the abrasive treble wash that often puts me off this end of extreme sounds. In fact the sound was damn solid, especially the low end, but I suppose a bassist in a YOB shirt is always a promising sign. Only complaint there was the drums were drowned at times, not that the headbangers up front looked to be having any difficulty in following the thrash and groove. There’s a punk feel about this lot that was not to resurface until CD later in the night, and a willingness to engage with the crowd that made them an excellent opener. I should have tracked them down to find out what the cover was – Napalm Death? No riots as yet.

Hideous Divinity took to the stage looking intimidatingly militant in their uniform shirts. An interesting bit of presentation in light of discussion with Josh Cattle about performance and staging. Did make me wonder who gets stuck with the ironing – I’m going with most recently joined guitarist, Giovanni. In my extensive pre-gig preparations I recoiled in horror at the thought of a technical death metal band, surely that’s the worst kind of death metal. However, a quick spin of their recent ‘pretentious’ (from their own press quotes) album Adveniens had me looking forward greatly to seeing how this translated live. What a sense of the epic, even if some of the definition of that meticulous recording was lost in this sweaty little tunnel. Oh yes, the room was filling, and it was getting very hot. Still fairly reserved; were people saving energy or was it just too constrained to go off? A refreshment trip to the bar – on the TV, Keanu Reeves is being charming to some implausibly cutesy young women. Back inside, the Italians are making friends; the technical aspect of their music (very impressive as it is) is not set above the need to crush, and in that spirit the frontman joins the headbanging conga with local gurners up front. Secret mischief part of my brain is thinking that a d-beat or two would set this alight but HD stick to their sound – fierce and technically impressive death.

Quick, outside for cool air before Broken Hope, it’s only going to get sweatier from here. Yes! Bring on the heavy metal and here comes the riot. Pit protagonists suss each other out and there seem to be no dickheads here. BH sit in that deep swampy guttural DM space, no epic tech or expansive atmospheres, no reaching beyond, just head down rooted-in-the-animal churn. Gone are my crusty d-beat yearnings as I try to keep my feet, big stupid grin alternating with grim gurning. My doubts about whether I’d enjoy being swamped in gore for a full set were washed away in a tide of sweat. No chance I was getting my notepad out in that lot; I rolled up my trouser legs and got stuck in.

Under an hour later I am soaked through in the chemical sweat of a dozen half-naked Welsh lads, and no it’s not a chemsex party, it’s Cattle Decapitation smashdown time. Quite rightly at the head of this bill CD use the gnarly punk spirit of GG, technical proficiency of HD, and gut-punch death of BH as part of their palette, shifting tone and rhythm without a missed step. Travis stalks the stage, switching his delivery with the chop of the music. Thinking back to my conversation with Josh about ‘performance’, Travis certainly plays it up – bantering, reeling, soaked-through (like those of us down in front of the stage), eyes popping. And indeed the ‘snorting your own gob’ trick is a good’un, and more punk than I’d expected to see this night. True to Josh’s words, the rest of the band are rocking out; but what ‘show’ there is happens in collaboration with the crowd – crashing about, up in the air, and managing that freedom/respect-for-others tension pretty well. Not too blokey down here either, as remarked upon by BH and CD, although the Wall of Naked Welsh Boys that popped up just before ‘Forced Gender Reassignment’ was a bit much. Before the band is done, the pit-crew is exhausted – slick corpses sliding about in the grinder, the Cattle Decap vision made flesh.

And out – heart pounding – into the Cardiff night, eerie hush on the last train home, quick wash under the cemetery tap before bed. I imagine they were still pumping six inches of sweat and assorted fluids out of the venue; and on goes the tour, back to the mainland to bring Hell on Earth to Belgium.