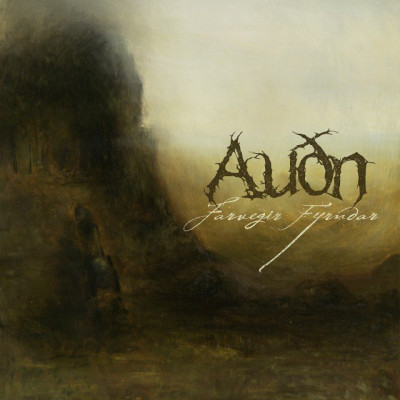 Winter is, no doubt, coming to the North. The flowers have all died and trees have lost nearly all of their leaves. Blue skies have been replaced by sombre grays. The next several months will be cold, quiet, dark and clearly, inspirational for some. The bleak changes to the landscape and harsh climate brought by nature have been synonymous with black metal for many years. It is perhaps uniquely influential when you are on an island, far from your closest neighbour surrounded by rock, ice and snow. The Icelandic metal scene earns its perspectives and inspirations honestly. One example of this is found throughout Auðn’s sophomore release, Farvegir Fyrndar (Ancient Riverbeds).

The black metal quintet’s second album is a stunning new album that focuses on the harsh gritty sound of metal and the allure of melody in a meticulously measured, deeply emotive release. If you like your black metal steeped in atmosphere and mired in melody then you can’t miss this album.

Auðn’s music weaves soft passages that build into aggressive climaxes as you might expect to hear in black metal. The vocals are delivered in Icelandic by Hjalti Sveinsson with a raspy combination of chanting, growls, snarls and tortured screams. He has a powerful voice that adds emotion to the composition without overwhelming it. The driving, strained track ‘Eilífar Nætur’ has Sveinsson sounding anguished, like a forlorn trapped animal. Against his vocal wails, a dense wall of mournful guitar exhales from guitarists Aðalsteinn Magnússon and Andri Björn Birgisson. Auðn creates a powerful swirling din that captivates with each visit to the Ancient Riverbeds. The production quality is exceptional with all the instrumentation having a voice in the crisp and punchy mix.

While the guitars are busy shredding your senses, bass and drums deliver the required low-end barrage. Drummer Sigurður Kjartan Pálsson and bassist Hjálmar Gylfason blend inventive and expected ideas to propel Auðn’s sound from calm to the calamitous, always with consistency.

Farvegir Fyrndar crushes you with fjords full of solid melodies and mesmerizing metal from track to track. It is rare to see such consistency and quality throughout an album. Unfortunately, the lyrics were not available from the band in English, but they did comment that the album’s themes “revolve mostly around depression, death and the emptiness that follows you…it is also inspired by our harsh nature and the quiet beauty of it.” The music makes me envision a fifty-minute silent walk, on a clear night, surrounded by the beauty and awe of nature. Tracks like ‘Í Hálmstráið Held’ create powerful and moving moments for pondering Nature’s splendour. The album offers such a dynamic range of emotion, from dark and foreboding to bright and uplifting, making it gratifying with each listen. I really enjoyed this album and I hope it gets this talented band some well-deserved exposure.

Auðn’s Farvegir Fyrndar is a phenomenal atmospheric/melodic black metal album. The melodies and bold, vibrant and inviting; the atmospheres hit with the fury of molten lava while the vocals imbue the band’s sound with a biting diabolical intensity. Soaring yet tempestuous, Farvegir Fyrndar radiates with the indomitable fury and majesty of black metal.

I used to wonder what the Night King has on at home after a long day of enslaving souls – I know now it must be Auðn.