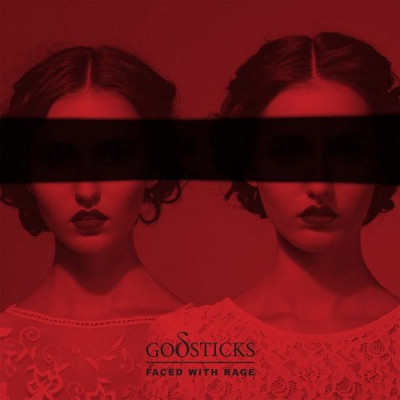 Faced With Rage by Godsticks

Faced With Rage is the fourth full-length album from Cardiff-based rockers Godsticks. It follows 2015’s self-released Emergence, a record that saw the band’s previously expressed progressive tendencies tempered by a tougher more riff-based sound. Whilst well-received, it turns out that Emergence was a transitional record of sorts – with this record, the band have married their new-found crunch to the more ambitious song structures of their earlier work.

Faced With Rage is the first Godsticks record to be released on the Kscope label, a label that’s become synonymous with the best new talent in progressive rock; it’s also the band’s first record as a four-piece, featuring new drummer Tom Price and guitarist Gavin Bushell, who have made an immediate and substantial impact on the band’s sound. Price brings a more metallic approach to the drumming whilst retaining previous drummer Steve Roberts’ impressive sense of progressive drama, whilst Bushell is nothing less than the perfect foil to Charles’ pyrotechnics. As an ensemble they sound tighter and more focused – and heavier – than ever before, their enhanced musical rapport likely a side effect of their recent touring activity supporting The Pineapple Thief (of whom Charles is also now a touring member). Whilst Charles has always been a remarkable guitarist, it’s particularly striking to hear how he has grown as a vocalist – always an effective performer, he sounds far more assured throughout this record. In short, everything seems to have fallen wonderfully into place.

Of course, it doesn’t matter how great the musicianship is if the material doesn’t measure up, but it is here that the album really scores. Godsticks have upped the ante here on every level. The more abrasive sound that permeated their previous album Emergence has been refined, but Faced With Rage is a more varied and emotionally richer record. Spiky rockers like ‘Avenge’ and the savage ‘Guilty’ are interspersed with more progressive fare, such as the thoughtful ‘Revere’, the haunting ‘We Are Leaving’ and the cleverly constructed twists and turns of the title track. The cunning sequencing of the record steadily builds complexity until the eight-minute ‘Everdrive’ appears. The penultimate track, ‘Everdrive’ provides an opportunity for the band to stretch out instrumentally, allowing each member more space than ever before to build momentum. Previously, brevity was a Godsticks speciality; on this record, it seems that the band have found another gear, greater confidence to embrace their progressive tendencies.

This spirit of adventure has not left the album feeling unfocused; the record possesses a conceptual thread, where each song examines a person dealing with emotional conflict of varying kinds. The title track sees the protagonist dealing with depression and a sense of hopelessness that leaves him wondering “Am I destined for suicide?“, whilst ‘Unforgiveable’ tackles the psychological dangers of a self-destructive taste for revenge in the wake of a betrayal, and the closing ‘Fame And Silence’ watches the disintegration of a celebrity who finds out the hard way that fame can attract fair-weather friends and an emptiness that can’t be filled: “I just can’t get enough / Can’t I just buy the love?” Perhaps most moving of all is the slow-burning ‘We Are Leaving’, whose protagonist, trapped in a hellish environment from which he can’t see an escape, pleads for release. Charles produces possibly his finest recorded vocal to date, which drips with pathos. “Say we’re leaving / Somewhere in the world, or place in time / I just wanna run.”

Faced With Rage is comfortably Godsticks’ most uncompromising, confident and ambitious record. It successfully marries their progressive tendencies with their new more muscular sound, and yet it manages to avoid the obvious progressive rock and progressive metal clichés. Powerful, involving and emotionally satisfying, it builds on the established Godsticks sound and pushes it in new and intriguing directions. Those who enjoyed Porcupine Tree’s latter-day flirtations with progressive metal or The Pineapple Thief’s starkly atmospheric rock will find a lot to enjoy here, as will those who enjoy the warped riffs and desolate introspection of Alice In Chains – the chunky bass and eerie melodies of ‘Angry Concern’ in particular should feel instantly familiar to Alice In Chains fans.

Progressive metal more often than not tends to be a poisoned chalice. In theory it should appear broadly to both fans of progressive rock and fans of metal, but usually albums tend to fall closer to one stool than the other. Not so here: Godsticks have turned in a record filled with superb performances that will appeal to both camps. This is the sound of a band who have come of age and can go toe to toe with the very best that both genres have to offer.