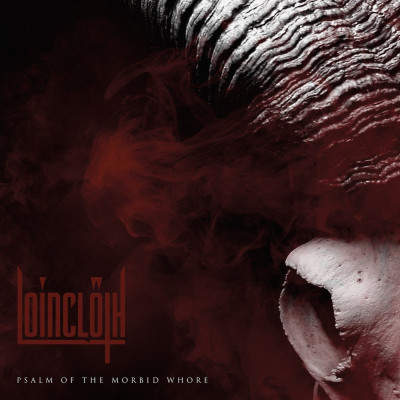 Psalm Of The Morbid Whore by loincloth

If you’ve ever wondered what the end result of throwing Melvins head honcho Buzz Osborne, circa Ozma, much-missed Voivod axtronaut Denis ‘Piggy’ D’Amour, the drumkit of Meshuggah’s Tomas Haake and an octopus into an atom-smasher and then decanting the remains into the Large Hadron Collider would sound like then wonder no longer, as Loincloth has you covered.

Psalm Of The Morbid Whore, the band’s ‘difficult second album’, comes five years after Loincloth’s first album, Iron Balls Of Steel, and finds the instrumetal quartet in relatively more straightforward mode than on their debut…well…straightforward by their standards, anyway.

No atmospheric intro, just straight in with lurching stop-start burl and nothing that could be described as frivolous across the whole board.

Not that one could ever have accused the band of overindulgence and dragging out track lengths into epic snoozefests, unlike many of their contemporaries, but whilst this second and, sadly, final album has not an ounce of fat on its twisted bones, it still manages to possess a metric fuck-ton of sheer heft.

Of the nine tracks present, only three break the three minute barrier, one barely, one at a hair over five minutes and a closing near-eight-minute epic, with most leaning more toward the two-and-a-half minute zone, leaving us with a muscular and compact half-hour long album.

Certainly a most refreshing change indeed for those of us who break out in a cold sweat over the very idea of seventy minute plus albums and twenty minute plus individual tracks – hell, the idea of a twenty minute instrumental fills me with so much dread you wouldn’t think I owned as many prog-rock albums as I actually do.

To the those yet to touch or be touched by the ‘Cloth, a superficial comparison could be made to twisted Swiss facemelters Meshuggah – a band whom I increasingly wish were instrumental – but with two vital differences: Loincloth’s heaviness is wrought in the old-school way of detuning regular instruments and having a generally ‘heavy’ mindset, rather than relying on multi-string guitars, and, most notably, the fact that with Meshuggah the twists in meter and timing are mostly driven by the guitar riffs, with the drums paying service to those timings with no flair or deviation from the central meter, but with Loincloth, skinsman and human-octopoid hybrid Steve Shelton – yes, THAT Steve Shelton, he of Confessor infamy – is not only firmly in the driving seat and locked in tight-as-a-gnats-chuff with axemen Tannon Penland and Craig Hilton, he is also skating over and around the beat, adding occasional flourish, finesse and filigree in much the same way as a particularly tasteful yet definitely fancy-pants guitarist would do.

With Shelton providing the rhythmic drive and embroidery that leaves Penland and Hilton to focus on delivering surgically precise pneumatic guitar punch and atonal atmosphere as bassist Tomas Phillips grounds the ensemble and enriches their central spine with a ground-shaking bass growl and rumble.

Sonically, as in pretty much all aspects of Loincloth, the quartet are all killer and absolutely no filler – helped in no small part by the solid and hefty production of Greg Elkins, returning for a second bout after having done such a sterling job on Iron Balls Of Steel.

As stated in the preamble, opening track ‘Necro Fucking Satanae’ lumbers straight into earshot and gets right on with the business of confidently dealing out a rhythm that the brain cannot quite follow but will have you banging your head anyway. One-two punch blocks of guitar and a rolling grind occupy the centre of things as hard-panned dissonant Norman Westberg-esque guitars punctuate alternate channels, a snatch of blastbeat throws things momentarily off-kilter before things fade with suspended discordant sheets of guitar and we are out and moving right along.

Zero fucking around, boys and girls. This is an attitude that also extends to track titles this time around – no in-jokes or knowing winks here, as opposed to tracks on the first LP like ‘Underwear Bomb’, ‘Hoof-Hearted’ or ‘Clostfroth’, this time around the aesthetic is the grimmest of black metal.

Following on from the initial attack, ‘Poroths’ bleeds in with a wave of feedback, whipping into a tight chugging drag and some sweet atonal harmonies, leading to my only complaint about the entire album (aside from it being the band’s last) – I needed more of these! Sure, they’re integral to the main riff to ‘Bestial Infernal’, but I’m a sucker for evil harmonies, and Iron Balls Of Steel and the band’s first 7” Church Burntings seemed well stocked in comparison. A minor complaint, for sure, but if Penland didn’t do them so well I wouldn’t crave them so.

Elsewhere cold waves of dread emanate out from burly funereal doom on ‘Morbid Whore’, creeping into earshot over uneasy drone and slithering back in again four minutes or so later, and icy black metal guitar rears its head briefly in ‘Pentacost Dissident’, returning later to punctuate the oddly swaggering chug of ‘Sigil Ov Five Horns’, ringing into Skin Chamber-esque industrial dissonance during ‘Let The Snakes Decide’ and calling out into the void for closing statement ‘Ibex (To Burn In Hell Is To Refine)’, mingling with staccato machine-gun rhythms and bruising percussive bludgeon until finally being subsumed into encroaching well-like darkness.

As a final nail in the coffin of the band, Psalm Of The Morbid Whore is a solid goodbye but I can’t help thinking that the band still had much to offer, although I suspect that may be more of a personal wish based on the paucity of their output over the 15 years of their existence.

However, I guess, everything must bow to the pressures of life eventually and so it is that this album becomes the end of the line as man cannot live on riffs alone.

Loincloth, we hardly knew you.