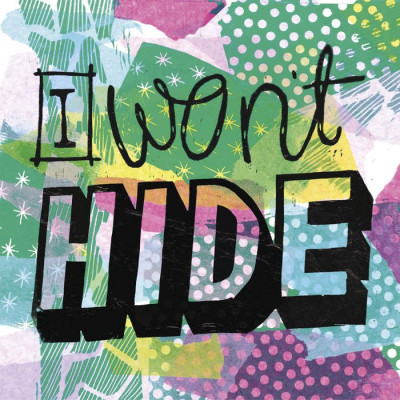 I Won't Hide by Nervous Twitch

I Won’t Hide, the third LP from Leeds-based band Nervous Twitch, is their first as a three-piece and over the course of fourteen songs becomes a brilliant blast through modern life in a lo-fi surf-infused garage punk style.

The overall feel of the album is described as being about “personal and universal themes of alienation, anxiety and adversity” and just as their name suggests this is all spasm and edge, contractions and kick-outs rather than an indulgently melancholy melodic wallow.

Opener ‘Put Me Back Together’ has Cramps-style organ behind a steady-rhythm and playful riffs as vocalist / bassist Erin Hyde sings of a friendship which sees you at your best and worst and endures regardless. Lead single ‘That Weird Guy’ rolls in next – getting its own 7” vinyl release right now through Punk Fox Records (while the album is released by Odd Box) – and over the minute and half of its agitated call-out we get a taste for their Ramones vs The Ronettes sound clash brilliance.

Elsewhere on the album we get the sort of industrial surf rock sound influenced by Swell Maps (‘Torment Me’) and the chants and whirls handed down by Buzzcocks (‘Waste My Time’) meaning that unlike many around at the moment Nervous Twitch are jumping back over the fuzziness of ‘90s guitar rock to draw on a rawer ‘70s sound.

The track from which the album takes its title ‘I Won’t Hide’ is a fast-paced chattering twang with more of those lovely keys and blistering pop sensibilities. The shimmer the band liberally add to their songs makes them stand out from much of the ‘too-cool-to-emote’ crowd, pulling on you in the most marvellous way. Closing with the stomp and echo of ‘Leave Here’ the album looks long compared to contemporaries but feels teasingly short, making you want to drop that needle right back to the start of the groove and throw yourself around a little longer.

While tracks are varied in tempo across the record, and there a definite evolution of the band’s approach to arrangements, it hangs together with a cohesion teetering just the right side of repetition. But with a rate of putting out an album a year – I Won’t Hide follows on from their 2015 debut Get Back In Line and last year’s Don’t Take My TV – this is a band who are certainly prolific in output and honing a sound which references styles across the alt-rock spectrum while anchoring it in the modern world, keeping retro sounding fresh.

Full of verve, Nervous Twitch resound with the unbridled energy of bright guitars and sentiments flickering between anger and amusement. Focused on forging their own path the time is ripe for them to reach a wider audience so if you get the chance do catch the band live, but in the meantime throw on this record and thrash dance all your cares away.