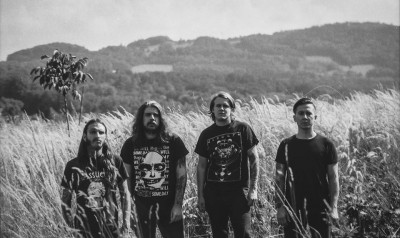 In some way we really have to prove to people that we have deserved this opportunity to be on a label like this.

Before their Manchester show with Vallenfyre recently, Steve Fallows managed to grab a few words with Implore guitarist Pedro to find out a bit more about the band’s first album for Century Media Records, and how this multinational band came together.

E&D: Thanks for your time. Last night was the first night of the tour, how did it go?

Pedro: Was a pretty cool show, lots of people came out and the reaction was pretty good for the first show of a tour. Normally it can take us two or three days to get into our rhythm and the first couple of shows can be pretty stiff, but it went really well.

E&D: You’ll be quite a new name to a lot of people over here, so can you tell us a little bit about the band?

Pedro: We come from Germany, based in Berlin, but all four of us come from different countries. We’ve been around for almost four years now and we are about to drop our second album Subjugate, our first for Century Media, and that’s pretty much it about now.

E&D: With you all being from different countries, how did you all get together?

Pedro: Basically Gabriel (Dubko, vocals) formed the band in Germany with two German guys, but he’s from Argentina originally and grew up in Barcelona, which is where I’m from. We hooked up there, so when he needed a guitar player, he just asked me. I moved to Germany and when the drummer left the band, we found a drummer from Italy, he played a few shows for us it worked well and we asked him to stay and he was totally into it. Markus is from Austria and we hired him to produce Subjugate and because things went so smoothly we asked him to join the band too and he agreed.

E&D: With Subjugate being your first album for a big label, did you find yourselves under any more pressure than when you have previously recorded?

Pedro: There was some pressure because Implore are such a small band for Century Media. In some way we really have to prove to people that we have deserved this opportunity to be on a label like this. Yeah, we are a small band, but we’ve got a lot to say. It was also different because it was the first time this line-up had been writing together, so we didn’t have anything to “better”. It all flowed pretty naturally when it happened.

E&D: Was the creative process much different with the line-up and the label changes?

Pedro: The biggest difference is that we have always been a trio, and now we are a four-piece, so we have a second guitarist now, which has definitely changed a lot of things. Marcus, the new guitar player has very interesting views on music and he brought a lot of new ideas to our sound. It’s also [Guido] the drummer’s first album writing with us and he has so many different influences that he brought to Implore. It was very different, but in a very good way.

E&D: What can we expect from Subjugate?

Pedro: Musically, there are some new ideas. I would say it definitely sounds fresher that our other material and still aggressive and violent because our lyrics are pissed off with the world and how it’s run. We put that anger to music because the whole concept is about the human race being a cancer for the world the way people destroy it for their own means. Basically the whole world is falling apart because of the human species.

E&D: I’ve noticed a big influence of Swedish death metal. What other bands influenced you?

Pedro: We took that Swedish sound especially Entombed / At The Gates, bands we all grew up on, but there were also many bands from outside that scene that were influential. Bands like Converge, they are a huge influence on me, and also classic metal like Slayer. We also listen to a lot of punk, I am a big NOFX fan and I think there are even moments where you can pick up small traces of their sound on our album.

E&D: Gregor McKintosh (Paradise Lost, Vallenfyre) features as a guest on the album, and now you are supporting him on tour. How did that come about?

Pedro: That was really cool because Phillip is our A & R from Century Media and he told us that Gregor is a big fan of the first record, so we asked him if he was up for some guest vocals and he said yes straight away. We sent him the song in the morning and by the evening of the same day, he sent us back the song with his vocals on it. His voice worked better than we could have hoped for and it totally fits the song.

Pedro: Hopefully more albums from Century Media; there is another tour with some Swedish bands immediately after this run finishes, also Europe and then we go to Japan and Asia. That will be it for this year, and then we’re working on more shows for next year. We just want to concentrate on touring as much as possible until we feel it’s time to stop and start writing again.