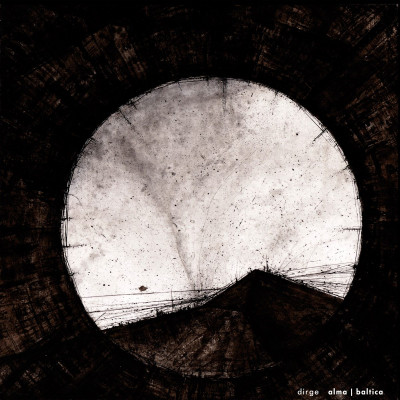 With a discography that goes back over 20 years, there’s been ample time for the the Paris’s Dirge to experiment with different genres and styles. Originally starting life as a two-piece industrial metal act, over the years, perhaps spurred on by their continually changing line-up, the band have increasingly drifted away from the somber, mechanical feel of their earlier material, towards a noisier more dissonant sound. This culminated in the crushing post-metal of their last album Hyperion.

Their latest LP Alma | Baltica, released 3 years after Hyperion, reveals another entirely different side to the band, delving further into the melancholic ambiance hinted at on their last album. Title track ‘Alma’, is a perfect example of this as muted interlocking guitar parts, barely perceptible voices and the merest hint of percussion unravel over the course of 10 minutes. In the background a gentle hum builds in intensity, before taking over entirely and ending the track on an ominous note.

Following track ‘Red Dawn Tibesti’ evokes the band’s industrial past as a static drum beat underpins moody baselines, swirling lyric-less, siren-like vocals which build to a cathartic, doom-laden climax that bears nods to their earlier work. Similarly the ringing guitar notes that open ‘Black Shore’ could have easily proceeded a passage of punishing post-metal. However, here they are used as the cornerstone of a considerably more meditative piece, as they are looped and interspersed by fragments of static and sonic rubble.

Rather than introducing noise as the track progresses, penultimate track ‘Sine Wave Oscillation’ opens with a churning segment of oscillating noise which gradually breaks up into mysterious, garbled spoken word samples, and looped guitar. On repeated listens it stands out as possibly one of the purer examples of the hybrid ambient noise/post-metal sound that the band explore throughout the LP.

If ‘Sine Wave Oscillation’ is a part way transition between the abstract composition that the band are experimenting with and their industrial/post-metal past, final track ‘Pure’ could well be the endpoint. Bar the opening heavily distorted chords, which could potentially be generated by guitars, there’s little evidence of any conventional instrumentation at all as the track gradually erupts into clouds of celestial noise. It is a fitting conclusion to a record that marks a interesting moment in Dirge’s evolution, occupying a space furthest from the music that could typically be expected from the post-metal/industrial act.

While the references to their earlier work are occasionally enjoyable, it’s ultimately the tracks that deviate furthest from the bands past that are the most engaging. Alma | Baltica, is the product of a band hard at work redefining their sound and whilst the resultant record might not be a high-point of their catalog in itself, it does indicate both a willingness to experiment and a promising direction for future development.