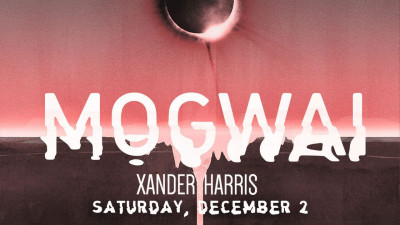 Mogwai at House of Blues

While I was riding the bus down to the House of Blues to catch the Mogwai gig the thought occurred to me that this must be at least my 10th time seeing them perform. However, this is definitely my first time seeing them in a venue so deep in a tourist trap area that I generally avoid at all costs. I began to reflect on how far this band has come in its since I saw them at the Fireside Bowl in 2001 (I may be off by a year or two). At that show there was no professional lighting, a barely functioning PA, a hellscape of a bathroom and I distinctly remember not buying a t-shirt because the band members were warning people not to wash them because they had just made them in the alley with spray paint. Things certainly have changed for this band.

The evening began with solo electronic artist Xander Harris, who upon walking out on stage gave a very heartfelt and emotional dedication to the Ghost Ship warehouse fire that took the lives of 36 people. This added some serious emotional weight and humanity to his blend of Carpenter-esque synths and melodic dance music. Over the course of his 30 or 40-minute set he effortlessly segued between delicate almost new agey melodies and stomping bass grooves with an enthusiasm and sincerity that is lacking in a lot of electronic music. I had never heard much of his music before but left the show very interested in exploring his catalog.

As Mogwai took the stage and first notes of ‘Hunted By a Freak’ began I almost immediately began to smile. How does a band with a 20 plus year history even begin to craft a set list? In Mogwai’s case this evening they do it by starting off relatively subdued with a few of their more dynamically middle of the road songs before stretching out into the driving shoegaze of ‘Party in Dark’ or the slow building soundscapes of ‘Don’t Believe the Fife.’ Seeing and hearing them effortlessly switch between styles while somehow making it all coherent is magnificent. While they may have turned down their overall volume from their all-out noise terror ways of the past they are still powerfully loud when they want to be.

One of Mogwai’s greatest strengths as a unit is their impeccable use of restraint. All of the parts and layers serve to fit the song with no member really stepping out as the lead player or most important. Melodies can come from any instrument and even then there’s no real spotlight or focus on that particular person. The exception to this is Stuart Braithwaite’s wonderfully wanky lead guitar in the ferocious ‘Battered at a Scramble’. This restraint and seeming seriousness is tempered by the ever-present sense of self depracting humor that’s built into their music. Wry smiles are across members at the (very) occasional flubbed note or que showing that while the music is heavy it’s made from a place of genuine joy and friendship. Seeing Mogwai live is a tremendously uplifting experience. Whether they’re drifting through a beautiful ballad like ‘Cody’ or hammering the powerful sci-fi throb of ‘Remurdered’ they are always aware of each other and supporting the whole of the song. It’s a chemistry that can only come from long term trust in each other’s musical abilities.

As I said before I’ve seen Mogwai many, many times and it seems like they get more confident every time. The set list was just as far reaching and diverse as their recorded catalog. Hearing old favorites up against newer material and having it all come across so perfectly is a real treat for long time fans of the band. When the sublime two song encore of ‘Every Country’s Sun’ and ‘Helicon 1’ finally died down and the show was over I was left feeling like I witnessed something special yet again. Mogwai has always been a special band for me and if this show was any indication that won’t be changing anytime soon. Thanks, Mogwai.

1.Hunted By A Freak

3.Party In The Dark

7.Friend Of The Night

8.Battered At A Scramble