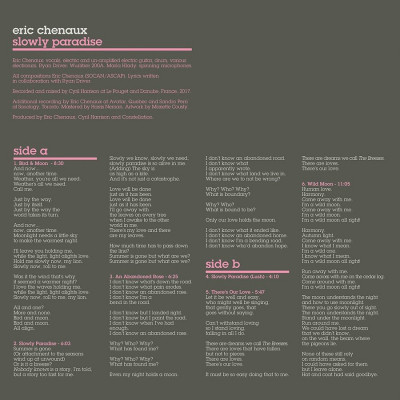 The work of one of Constellation Records most intriguing artists, one Eric Chenaux, has always occupied a space in the corner of this universe that makes it difficult to completely classify. Over his career, we’ve seen five full length album releases on Constellation, the odd collaboration here and there, and each album occupies that wonderful headspace he conjures up, offering a comforting familiarity whilst simultaneously confounding and confusing the listeners with such unconventional techniques and ideas. With each new album, it’s always seemed that Chenaux has progressed further and further into his beautifully eclectic style, and his latest album Slowly Paradise is no exception, with it being a wonderful exploration in many sides of duality and opposites all co-existing within one cohesive vision.

Those familiar with Chenaux wonderfully unique style will no doubt come to expect much of what is present on Slowly Paradise, though like many of his previous works, it still has the capacity to amaze and astound in its wonderfully beautiful syncopated and complex simplicity. Chenaux’s vocals gently soar over a kaleidoscope of improvisational guitar and occasional Wurlitzer 200A (Performed by collaborator Ryan Driver) that dance across any note they can find, all of which juxtaposes with the calmer side, sounding almost chaotic and maddening in its structure and tone. This exploration in duality, balancing something beautiful and calming with something very unconventional brings up a mixture of emotion and feeling, further pushing this theme of duality to an almost meta-sense that goes beyond the music on the album itself, (even as far as the album’s artwork, which arguably feels like an inversion of the inner-sleeve with the outer-sleeve).

The idiosyncratic style of the music, paired up with the sweetest & the loveliest of vocal styles, results in an album that is incredibly warm and inviting, even in all the confusion and chaos that is equally presented. From the album’s opener of ‘Bird & Moon’, those familiar with the style will no doubt brace themselves for the wild ride that Slowly Paradise is sure to become. From there, we float effortlessly from track to track, feeling a controlled chaos in the gorgeous ‘An Abandoned Rose’, to relaxing serenity in ‘Slowly Paradise (Lush)’. The real crowning achievement here though is the album’s closer ‘Wild Moon’, where every single element of Chenaux’s wonderful style is unleashed in an 11 minute opus, both equally relaxing and chaotic, and perhaps just one of the best recordings Chenaux has released across his career.

Slowly Paradise, like Chenaux’s albums that have preceded it, is by no means an easy listen at times, though conversely, at times it feels effortless and free, further fueling the dual nature of the album and its themes and concepts. This is an album that might raise the eyebrows of anyone attempting to introduce themselves to Chenaux’s style, which at first may feel a little too avant-garde to be easily digested. For those familiar with Chenaux’s work though, this will no doubt be an album to truly remember, one that sees him at his most personal and intimate.

There’s a wonderfully engrossing quality to the music, which when one is pulled into completely, reveals itself to be a beautiful world of a head-space, where the most disparate of ideas and concepts can co-exist harmoniously, all of which results in some truly rewarding music.