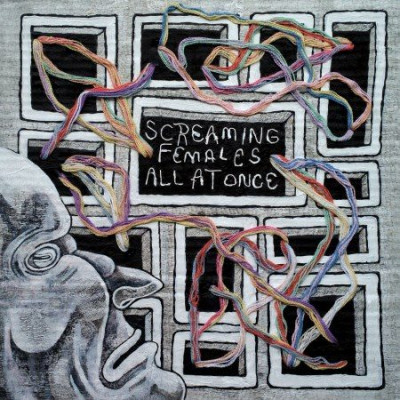 All At Once by Screaming Females

With over a decade of independent touring and music making, New Brunswick, New Jersey’s Screaming Females have sunk their souls deeply into making music their own way. The band has always crafted catchy, melodic songs. This is evident all the way back to their 2006 Baby Teeth album. The band has made a few subtle tweaks to their guitar heavy, aggressive sound with some experimentation into slower tempos and other genres of Rock. Certainly, the seeds of experimentation that were branching out on their wonderful Rose Mountain album have blossomed into beautiful sonic flowers on All at Once. The trio’s energetic new release All at Once shows has the band sounding confident and imaginative as they continue to create their unique Rock/Punk music.

The first thing you’ll notice about the band is the captivating and powerful voice of Marissa Paternoster (guitar, vox). Her distinctive voice oozes a unique character with its highly expressive vibrato and shifting vocal dynamics. Screaming Females’ music often sounds fuller than a mere trio should sound. With producer Matt Bayles’ stellar work, this has never been more evident. The band wanted their new album to “evoke the energy and spontaneity of their live performances” and the richness of the production certainly allows this to materialize.

All At Once overflows with groovy melodies and songs drenched in Paternoster’s riveting guitar work. It is easy to envision rocking out at a gig to ‘Step Outside’ or ‘Soft Domination’ or many other killer tracks on this album. The magnetic grooves are executed impeccably by Mike Abbate (bass) and Jarrett Dougherty (drums). The back-end contributes solid creative flourishes while consistently fueling the foundation of Screaming Females’ music, song after song, throughout the album.

The album has a more diverse and substantial palette of sound than on any other Screaming Females album. The band aptly delves into more complex song structures and introduce a variety of new instrumentation to their sonic repertoire. While the “three piece punk rock sound” is still the heart that beats within the band – they allow themselves to further colour their musical canvas with the occasional keyboard accent or even a glimpse of uber-punk xylophone, as heard on the graceful ‘Drop by Drop’.

The live improvisational spirit of the band is fully recognized on the ambitious two part song ‘Chamber for Sleep’. It is a sprawling track that breaks into waves of long instrumental, dreamy passages that awaken with stirring guitar and vivid tempo changes. The lyrics ponder the final sleep and afterlife: ”Your stare is a gun, unlit room/ Your body lit by the black moon/ Make me a mantle, and say grace/ Your prayer and visions slip away”. The words throughout the album have deep meanings and symbolism than may not be readily apparent at the first glance.

While there is plenty of experimentation that delves into the sonic equity of “loud/soft”, the album also has plenty of mighty riffs and kick ass rockers. Tracks like opener ‘Glass House’, ‘Black Moon’ and ‘Agnes Martin’ (to name but a few!) prove the band’s foremost fearsome quality remains their tenacious guitar prowess.

This is a remarkable album by Screaming Females. Full stop.

The band explores various genres of music – all capably – with inventive, well-crafted, catchy, earworming, ass kicking guitar rock. All at Once has some very good songs, but the album consumed in its entirety is excellent. A highly recommended and shining accomplishment for this veteran band.