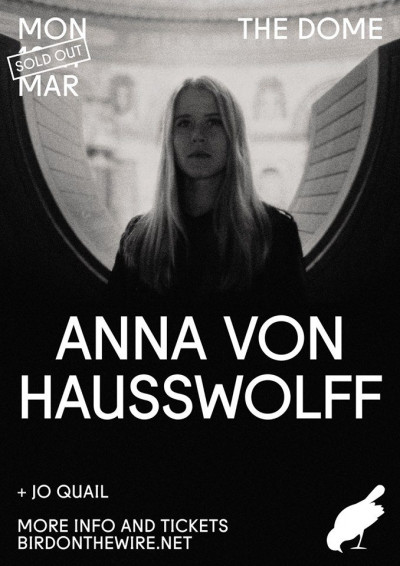 There’s a moment during tonight’s sparse encore track ‘Gosta’ when Anna von Hausswolff, moving slowly through the crowd, mic in hand, fixes her gaze upon me – me, I swear! – and I’m basically reduced to a bag of jelly. The silence maintained by the crowd during this quiet ballad, and especially the meaningful pause before applauding after its completion, attest to the reverence felt in The Dome tonight. I have been excited about the return of Von Hausswolff and her band to London since seeing their fine performance in support of Swans a couple of years ago and constantly listening to her triumphant latest album Dead Magic, and what transpired was an evening unlikely to be forgotten by anyone present for a long time.

The announcement of solo experimental cello player Jo Quail as support for any show – as happens regularly at the moment – is always a treat. Quail’s music has the wonderful ability to perfectly accompany a large variety of styles that seem, on paper, completely opposed. She supported drone metal legends Boris and intense post-hardcore band Amenra recently, for example, and folk black-metal diva Myrkur – wowing the crowd on both occasions. Tonight, however, Quail is a more obvious choice and no less excellent for it: her hypnotic compositions perfectly complement Von Hausswolf’s organ-drone soundscapes. Quail’s ubiquity on the London scene has done her wonders, receiving a large cheer when she takes the stage and an even louder one when she leaves. Her first composition of the night ‘White Salt Stag’ is based on an almost martial-industrial rhythm created by looping percussive taps on the fingerboard of her cello, with melodic lines layered above. Overall, it feels like the story of the hunt seen through the stag’s eyes, as beautiful as it is tense, strident and purposeful.

Quail announces that tonight’s second track will be on her forthcoming new album, which she is set to record soon at Liverpool’s now legendary Skyhammer Studios. The song itself displays some of her most experimental work yet, composed from cello loops – like most of her material – but with each sound seemingly almost entirely disconnected from its source instrument. Quail’s effortless virtuosity achieves sheer sonic alchemy, and the effect is something like watching a cello synched to recordings of The Fragile era Nine Inch Nails. There are reversed strings, broken rhythm, electro-dub bass, eerie minimalism and a horror-film tension to the plucked string parts – and it is in tracks like this that it becomes clear how Quail can successfully support bands like Amenra and Boris.

Her final track ‘Gold’ conveys a radiant beauty worthy of its name. Scratching her nails down the strings, a reverse heartbeat. I happen to be reading about Ancient Egypt (with a huge tome weighing down my bag), so this particular source feeds metaphors into my consciousness whilst listening.  The red/yellow cones of the stage lights seem to describe the shape of a pyramid, illuminating the glint of grave goods in a darkened tomb; mournful slurs convey the sorrow of 10,000 disabled pyramid builders. Quail’s next album is clearly one to look out for, and, after a string of support slots, I hope to catch her live, headlining her own show, so that she has the time for her material to breathe in a longer set.

If you asked me what was going through my head whilst watching Anna von Hausswolff I could honestly tell you very little – I doubt there was a single person in this sold-out show who was not utterly transfixed from start to finish. The diminutive Swedish singer exudes enthusiasm for performance, a sheer rapturous joy at playing to such a dense, enthusiastic crowd. Performing with her entire body, she sways to and fro at the keys, swinging her ornate plaits around in head-banging worthy of any metal band, and screams in a manner commensurate with her lupine name. At one point, the band’s guitarist hastily reattaches one of Von Hausswolff’s pedals as she knocks it off her keyboard with an overenthusiastic gesture.

There are technical issues at one stage, with Von Hausswolff stopping ‘Marble Eye’ in exasperation to bemoan the sound technician, who seemingly forgot to plug in the bass pedal on her keyboard. Her tone is somewhere between accusatory and playful, and – following a brief slug from her can of Stella Artois – the issue is fixed, and she proceeds with the track’s tricky-sounding counterpoint arpeggio introduction; a momentary serious look of concentration fixes her face, followed by a beatific smile as the bass notes finally kick in.

Von Hausswolff’s latest album Dead Magic is her darkest and most accomplished yet, distinguished by wild vocal experimentation. If her screams are chilling and awesome on record, they are quite something else live, sending a genuine frisson across the skin. Von Hausswolff has made no secret of her love for metal, and, with the screams she now uses to embellish ‘Pomperipossa’ from The Miraculous, she gives Tom Araya a run for his money. Tonight is essentially a play through of Dead Magic, but in a different order and with a couple of older tracks thrown in for good measure. New pieces such as Dead Magic’s sprawling 16-minute, post-rock drone epic ‘Ugly and Vengeful’ really come into their own in the live environment, helping you appreciate the complexity of their construction all the more. With little in the way of a conventional song structure, it’s a track that builds up layers of sustained organ chords, huge doomy guitar riffs, and more horror-film creepiness. Ultimately, the experience fails to live up to track’s title, instead capturing – with minimal hyperbole – a feeling of transcendence and joyous affirmation of life: a hymn to the sun. Live, Von Hausswolff’s band mimic the album’s string sections using bottleneck slides, and both natural bows and E-Bows on their guitars. This serves to accurately reproduce the key details of the original enough to be recognizable; but it also adds a different timbre, making the songs into unique renditions for the live environment, and which make these shows well suited to a live album (hint, hint).

Von Hausswolff gets her mouth organ out during ‘Källans återuppståndelse’, perhaps inventing the curious new sub-genre of harmonidrone, alongside deep-bowed bass tones. The band even gets a bit Goblin, at points, capturing something of the exuberant prog-synth of the Italian horror soundtrack maestros. Once the track gets moving, it sparks a surge of energetic dancing in the hall, led by Von Hausswolff of course, with the feel somehow of Electronic Dance Music. By this point in the show, there’s only one Dead Magic track left to play. In case we hadn’t guessed, someone calls out for “Electra” (ie ‘The Mysterious Vanishing of Electra’, the lead single from Dead Magic), and Von Hausswolff jokingly retorts that they “don’t know that one”. Fooling no one, she picks up her acoustic to begin the track that brought many people here tonight. Even a slightly uneven sound for a few seconds can’t halt the power of the track’s opening open E-minor chords, and it’s every bit as haunting and enchanting as on the album.

You know a genuine encore when you hear it. Everyone knows the feeling of watching a rehearsed encore, with the crowd politely humouring the band as they leave the stage, who then return to crank out a couple of their hits. Tonight, however, we shout ourselves hoarse and clap ourselves calloused to ensure that Anna von Hausswolff and her band return to the stage. They play for about fifteen minutes, seeming to enjoy jamming and showcasing the heavy, doomier sides to their sound, with some familiar melodies occurring every now and then. The crowd will embrace anything the band have to throw at us, and the party atmosphere continues, despite the funereal tone of some of the material. By the time Von Hausswolff comes out into the crowd to sing us the final bittersweet lullaby that is ‘Gosta’, nothing could be more apt than the central lyrical refrain, “I won’t leave until you leave me.”

I could spatter you with superlatives and accolades for Anna von Hausswolff at this stage, but I’ll spare you that. Gushing like a loved-up adolescent I may already be, but I’ll simply finish by imploring anyone with even the remotest interest in this band to buy a ticket next time they return, which – following tonight’s obvious triumph – will no doubt be very soon.