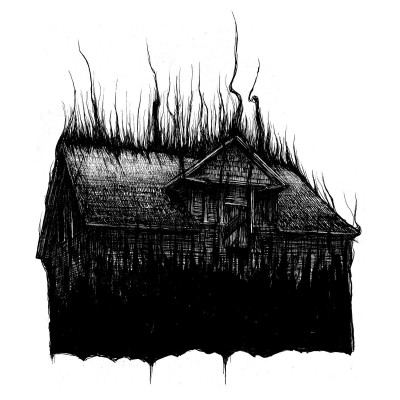 Riding with spoken word artist Matt Finney should come with a disclaimer: warning: heavy shit ahead. His deeply personal prose, often delivered in a matter of fact fashion that belies the weight of his words, seldom flinches and never pulls its punches. The international cast of collaborators that he’s worked with – be it Ukrainian multi-instrumentalist and long time partner in crime Heinali, uncompromising Iranian drone artist Siavash Amini or California based composer William Ryan Fritch – always seem willing to climb down into the murk and follow whatever the ghosts of his past lead him. Clawing sees him with another pair of adventurous musicians, this time a little closer to home – fellow Alabama-based artists Austin Gaines (aka industrial/noise artist Calques) and synth-shaman Jeff McLeod – and is, to my knowledge, the first record he hasn’t had an “& Matt Finney” on the record cover. Which suggests more of band set-up than a loose collaboration, but the proximity of the players and the dropping of the ampersand hasn’t made the work any more convivial – if anything this release is up there with his most uncompromising.

It starts out typically confessional, in a similar manner to his last record with Heinali (How We Lived). “Woke up 20 years too late and next to the wrong person” sounds like the beginning to a rumination over the same ground as those contained on that album; of failed relationships, addictions and disappointments. But it soon takes a turn towards the dark. His voice is cleaner – gone is the cheap recorded effect that sounded like a suspect in a police interview. But though it may sound clearer the subjects are more metaphorical. Baby birds break out from their shells, tumble from their nests to a bloody end on the frozen ground below. A deer covered in sores sneezes blood into the snow. And then there’s the wolf headed man..

..and then there’s the noise. ‘Mythology’ sounds like a broken bank of machines, severed cables flailing and sparking. On ‘Gourds’ weaponised static courses through brooding ambient hums and gentle guitar strums like some awful disease. You could call it industrial, if you can imagine the machines all breaking down at once and screaming as if in pain. ‘A Clearing’ sounds like what the new Blade Runner soundtrack would have been like if they’d have eschewed the sci-fi world building and pseudo-noir poses and instead reached into the guts of that dystopia and let it play out as a horror movie. Finney has described Spectral Estate as a concept album about, “a haunted house, child abuse and night terrors,” and Gaines and McLeod live up to that grim billing. They’ve created the perfect home for a nightmare to live in.

As it marches towards its end it takes on more of a hallucinatory quality, as if the line between the nightmares and waking horrors is becoming increasingly blurred. ‘Plastic Glowing Stars’ wallows in muted, sombre arpeggios and malevolent drones that disturb far more than the sound and fury of the earlier tracks. Finney’s interjections become less abstract but no less horrifying. “Keep crying. Keep crying. You won’t get out.” And it ends on the troublingly titled ‘Home’ in an inevitably discordant finale, all broken horns and teeming electrical hisses, half-heard whispers, what sounds like shuffling cutlery and an undecipherable, barely human guttural voice. All as Finney intones: “Let me go. Let me go. Let me go. Let me go.”

If this is a haunted house it’s not one full of gleeful shlock and corny slasher flick tropes – it’s one in a sketchy neighbourhood you’ve never been to where you’re not sure how much of the blood is fake and you’re barely surprised when you discover there is no exit. It plays with real blades: it doesn’t set out to shock but to chill right down to the bone. It’s the kind of record that makes you think that maybe some albums should come with a warning sticker on the front after all – not due to prudish notions of vulgarity or the corruption of the youth, but because once they’ve reached the end you might not be the same person as the one who pressed play.