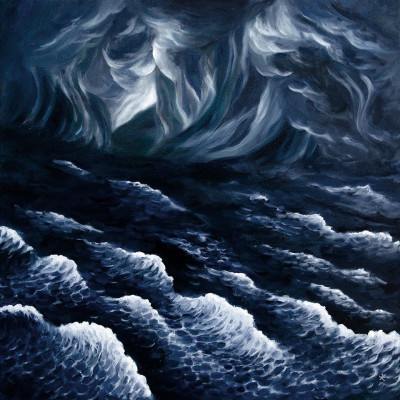 Packed into a dimly lit, small and almost claustrophobic space. Squeezing my way between merch tables and the stage to make my way either to the bar or to the bathroom. This was always the way at The Star & Shadow cinema, the minute indie cinema and also one of Newcastle’s finest underground venues. It was anyway until it sadly closed a couple of years ago to relocate and is soon to reopen. In November of 2012 I visited there to see a band I was beyond excited to see again in the Liverpool-based and all conquering Conan. I was so excited that I probably didn’t even give the rest of the bill a look. I may not have even known who else was playing. Fortunately though, I got there early enough to see the support and how glad I am that I did.

Ommadon are a drone-doom duo from Glasgow who won’t be getting any radio play. Ever. Having been crafting long, exploratory, atmospheric ballads of pure misery for a decade now, new release End Times is their sixth full-length record and their first release in close to two years, since 2016’s self titled Ommadon LP as well as their split with Legion of Andromeda entitled Crumbling Existence, which was released later the same year. For those who have followed them thus far the record will sound familiar. The steady burn of the depressive drone, the build crawling at a painful pace and interrupted only by jagged, sharp and ruthless riffs and resounding, piercing drumming. This record does feature a noticeable difference however in the inclusion of vocals for, I believe, the first time.

From the merch table at The Star & Shadow I picked up CD-Rs of the III and IV albums and wasn’t asked for any money in exchange. I believe I handed over a small amount anyway although I could be mistaken. That night I witnessed a set that seemed to defy acceptable volume levels, especially in such a small venue. A set that almost threatened to put a dampener on the rest of the night until I was able to regroup with a beer and some fresh air.  I was probably going to hand over any amount I was asked to for those CDs at that point and Ommadon IV especially still gets a heavy rotation today. It is, in my opinion, their heaviest-sounding and yet most relaxing record. Their latest offering however may just be their most depressive and challenging.

Clocking in at just shy of 43 minutes, End Times is one long track of gloomy and murky drone doom. Sluggish and slow moving, it is never lethargic or uninspired. The listener is pulled in to an incessant and rumbling void, aided well by the dreary, almost lifeless growls. It is only in its last ten minutes or so that flickering life is temporarily breathed back into the lungs with the shrill and harrowing screams before the record concludes the way it began, sinking in to the gloomy mist with a slowing pulse. The title of the album really is perfect and needs say no more. End Times is a dreary, unnerving and distressing apocalyptic soundtrack to the end of days.