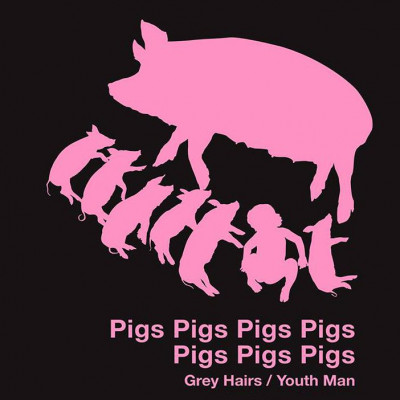 To begin the run in to this year’s already amazing looking festival the good people of Supersonic have brought back two great bands from last year to kick things off with a bang. Both Pigs Pigs Pigs Pigs Pigs Pigs Pigs and Grey Hairs played on the central “Wild” stage in a glass roofed old warehouse that, I think to the surprise of all in attendance, turned into an absolute oven on an unusually warm Birmingham weekend. Apparently even if your festival is held indoors in the centre of a major city you still can’t escape the vengeful caprice of the British summertime. Tonight’s rematch takes place in unpromising conditions on a wet Wednesday night. Undeterred by the grey pall of spring, a decent sized crowd is already in to catch openers Youth Man – a fighty local punk trio from whom great things have been expected for a year or two now. Smart, energetic and vital this is maybe the fourth time I’ve seen them and they do keep getting better. It’s a kind of hardcore with a chewy centre for the most part, although they introduce ‘I Don’t Know’ (from their soon come EP) as a pop song. It’s pop by Youth Man standards. It’s bigger and brighter. I like it. It sort of reminds me of ‘Line Up’ by Elastica – make of that what you will. 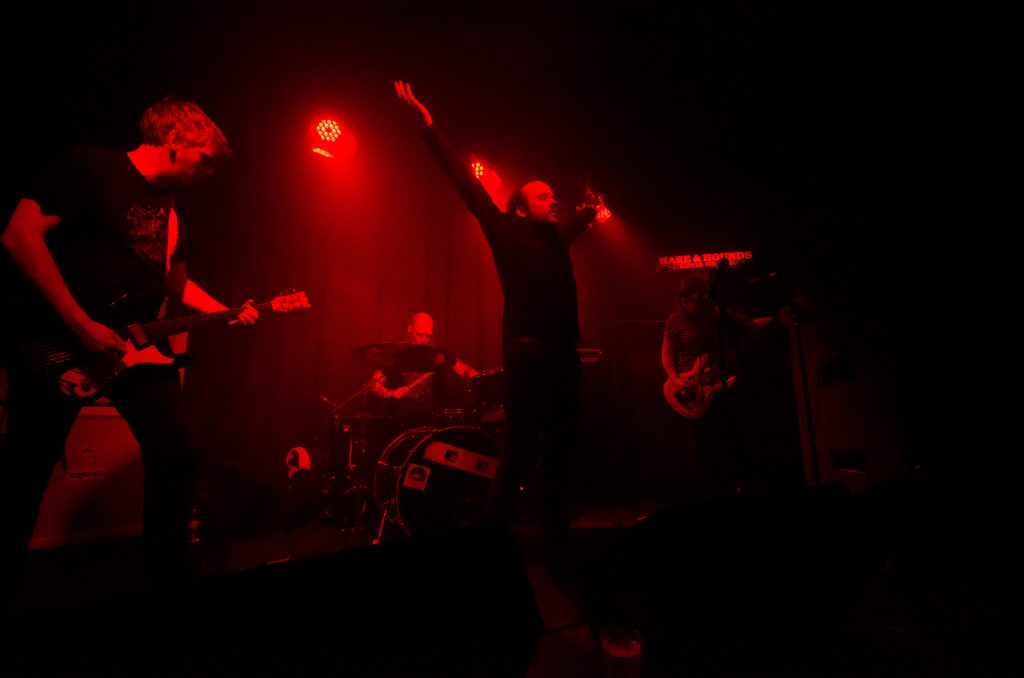 Grey Hairs do not seem to be in a pop mood themselves. Perhaps compelled by the spirit of Iommi in the room, the set is mostly drawn from the slower, heavier numbers in their songbook. It’s not just a dose of doom and grind though; they stretch the songs making them more dynamic: ‘Backwards’ prowls menacingly before exploding; ‘The Hedgehider’ is almost unrecognisable, and the queasy swamp-goth swing of ‘Red Paint’ swaggers to the fore. The tension has built through the set, so that when they get to ‘The Chin Pt 1’ it goes off like a rocket, the last minute bass/vocal switch for pt 2 a set closing master stroke they’ll work hard to better. There’s just one new song in roughly this vein tonight; but a new album is due to be recorded, and I can’t wait to hear it. 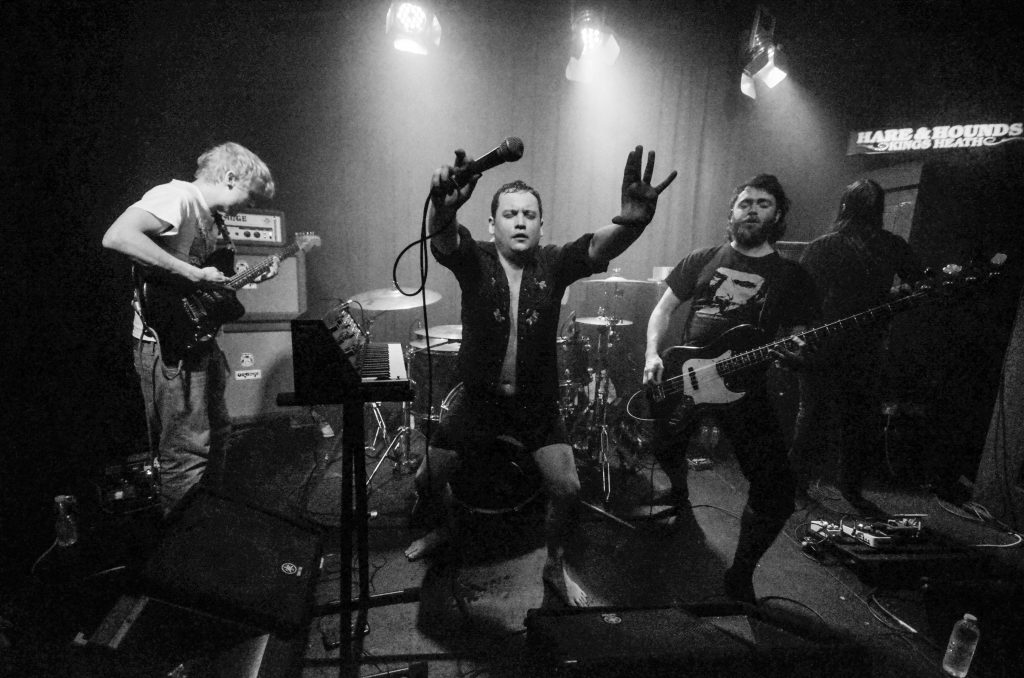 Pigs Pigs Pigs Pigs Pigs Pigs Pigs are as charmingly brilliant and ridiculous as their name, and almost as hard to explain. In a twist on the old saying, they have come all the way from Newcastle to bring a tramp’s buffet of Sabbath riffs home. Most other elements are discarded in favour of massive riffs distended into molten pools and stirring up the sludge from the bottom. They’re far from the only band to attempt this sort of thing but they do seem to have found a singular recipe. It’s a simple but effective one that the new songs don’t show much sign of diverging from, although one of them puts on a previously unseen burst of pace. Others on this path are often instrumental and overly serious, the pained weight of existence pressing on their chests. Pigs are having none of that; what sets them apart is their playfulness. It’s there in their name and personified in vocalist Matt Baty. Still ridiculously fresh-faced enough to be in school. he nonetheless has a Lemmy rasp to his voice. 20-a-day is still standard for kids in the Toon, I am reliably informed. He howls and screams like the best of them and seems to be enjoying himself immensely rather than vomiting out psychic demons: “I’m a thumbsucker!” he yells, and sucks his thumb. He’s funny between songs, explaining that tonight is all that remains of their “European Tour”, sadly abandoned after a couple of dates fell through. He holds up a fluffy toy pig they bought at the motorway services on the way down and introduces him to the crowd. It’s not your usual metal theatrics. And then more riffs, a pulverising relentless wave of them. It might be dumb but it’s also undeniably great fun. An excellent evening all round. 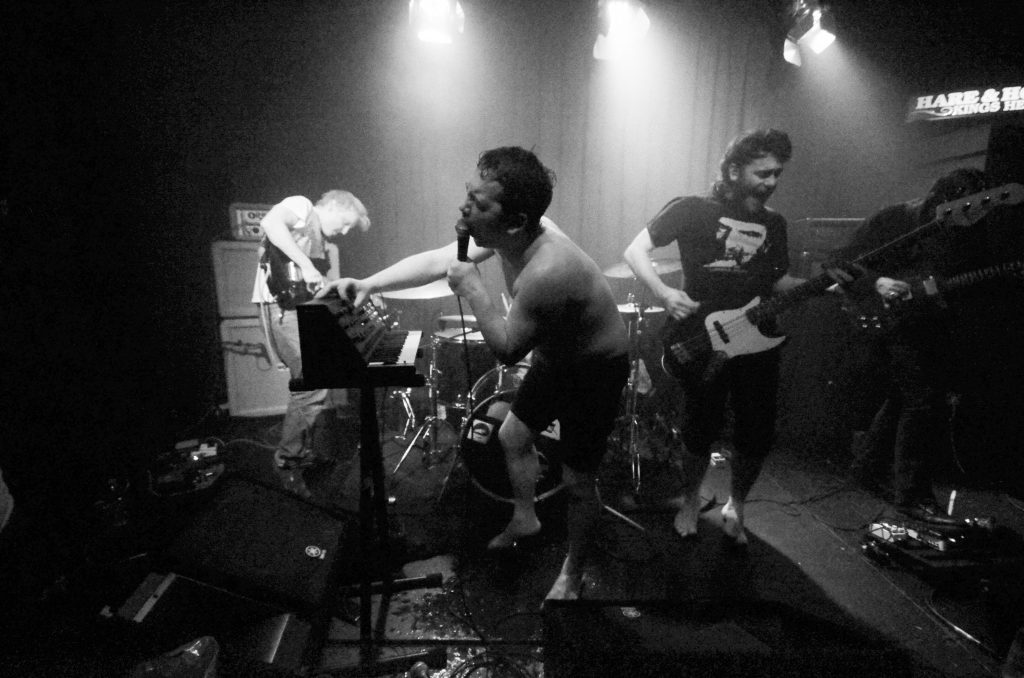