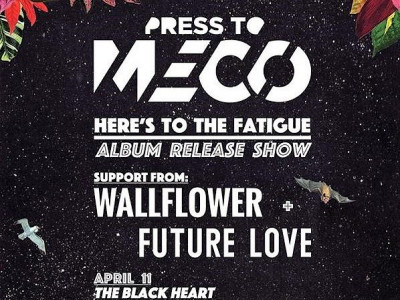 Press to Meco at The Black Heart

Bringing us their latest release, Here’s to the Fatigue, Croydon based Alt-Rock/Pop-Punk/Metal mash-up merchants Press to Meco hit the stage at The Black Heart in Camden on the 11th of April. And hit it they did.

But before the album-launching trio trod the boards of the respected Black Heart, we were treated to Alternative/Grunge stylings from East Midlands-based Future Love and, the heavier Rock rhythms of the inaccurately named Wallflower.

Future Love, a band I personally would love to see again, at first appeared an odd choice for this gig. They’re a bit of a motley crew at first glance, and their Grunge-y rock isn’t quite on the same page as the Press to Meco boys, but I admit this first impression was entirely a wrong one. Future Love proved to be a very well-chosen start to the evening. High octane and driving, they gave their set an energy that brought the Wednesday-night crowd from post-work slump to head-bobbing foot-tapping enthusiasm. The “curtain jerker” set at any gig is a tough one but an important one, and Future Love set the tone and standard for the evening exactly where it needed to be.

Following Future Love, and our final support act for the evening, were Wallflower. Much more in the same vein as Press to Meco musically, Wallflower are a band that focuses on the anthemic features of Rock/Metal. Seemingly striving for the lighter end of heavy, they offer an accessible brand of alternative music that I found grabbed me after the first few bars. While I’m forced to admit they’re possibly not doing anything new or innovative per se, they do what they do very well – ‘Splintered’ in particular I thought was an excellent track. There were seemingly a few problems with the vocals – the lower register, in particular, came across as muffled and quiet – but it was a good set and kept up the momentum of the evening.

Last but by no means least, after a swift changeover, Press to Meco took to the stage. I’m always impressed by the sheer presence of some artists as they’re performing, and while the press of the crowd was such that I didn’t get to see much of bass player and vocalist, Adam Rofferty, it was clear to me that lead vocalist and Guitarist, Luke Caley, and drummer and vocalist (yes, they all sing, they’re a talented lot) Lewis Williams, were at home on stage in a way I haven’t felt at home since I moved out of my parents’ house ten years ago.

Being the launch night for Here’s to the Fatigue, this was their evening and they knew it. Confidence oozing out of every pore, and the crowd entirely behind them, they launched into their set with gusto and with Williams leading the vocal charge. If you’ve not listened to Press to Meco before, they’re a clean-cut-looking lot, and their heavy, riff-driven Rock/Metal might come as something of a surprise. What I love about their music is the heavy undercurrent that is offset beautifully by the soaring, clean vocals and harmonies.

The harmonies and multiple vocals are a good USP, but there can be a downside to that; all members of the group end up stuck to the microphones. Sometimes this can cause the show itself to feel static and lose energy. Not so for Press to Meco, as Caley has a patter that, despite being a little like an excitable teenager at times, people respond well to. Several times through the evening he started a mosh pit merely by willing it into being. An impressive piece of stagecraft and not something I’ve seen done often. And that’s a big part of Press to Meco as I see it; they do things not done regularly, they’re different and, in a way that people respond well to.

For an album-launch evening, the set was balanced, and the references to the album were there but very infrequent. If I’m honest, it often felt more like a standard gig than a special occasion for the band, but that’s not to say it wasn’t good; it was. It was very good, and new album or no, the Camden crowd were pleased to see them. The last band I followed that played The Black Heart went on to take the Islington Assembly Hall for their next show. I hope that Press to Meco will equally make that leap up to the next step. All the best lads. It’s a good album; pitch it a little harder.