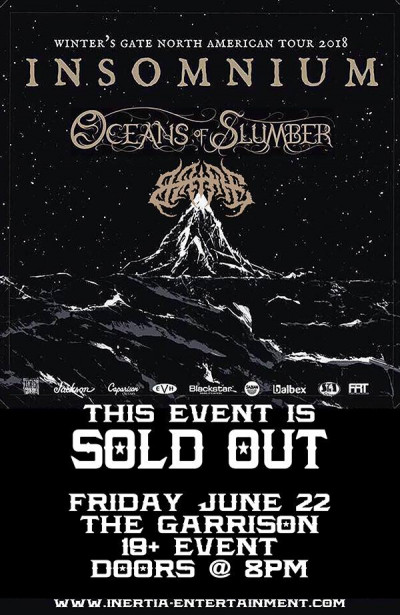 Insomnium at The Garrison

Venturing into the weekend and looking to let loose, myself and the Toronto metal scene were excited to partake in some Scandinavian and North American fist-pumping with the return to Canada of Finland’s melodic-death powerhouse of Insomnium, and with support from Texas up-and-comers Oceans Of Slumber.

The event was sold out, indicating that fans were clamoring for this bill in droves. So after enjoying a couple of beers outside the club with friends prior to the show, we entered to the familiar face of longtime Toronto metal promoter (and friend) Noel Peters. This being my first time at The Garrison, I instantly noticed how relatively small it was compared to the other main concert venues in the city, but it had a great charm about it. Nothing fancy, and dimly lit, so I guess you could say that it was the perfect spot for loud music in general.

First up was local support in the four-piece of Bane from Montreal.  After relocating from Serbia to the French city, I was hoping we could hear the European influence in the groups melding of black and death.  What I got was a surprise in general. I mean surprise in the sense that you never know what you’re going to get with local support. Sometimes you’re wowed, and other times you want to head for the bar immediately.  At this particular show, I was very happy with the result. The band opened with ‘The True Insomnia’, which instantly had me drawn in. The sound is a tasty mix of black and death, and it hits you full tilt and in the face. The band ventured through a great six-song set that spans their catalogue of two albums and various split EP’s and singles. Ending with ‘Pandemonium’, the band looked to impress many in attendance, and had an infectious energy that had the crowd banging their heads. Frontman Branislav Panić was of particular note here, as he had an impressive stage presence and never lost his energy. This is a band to keep an eye on everyone!

After a short break between sets (and getting to meet the super-friendly members of Bane at their merch stand), it was time for the Canadian debut of Oceans Of Slumber. To say I’ve been paying close attention to this group for a while is an understatement.  From their debut release, and then their follow-up with singer Cammie Gilbert joining the group, the band has been getting a lot of press and critical acclaim for their unique blend of doomy, progressive metal meeting melodic death.

The set started off with ‘The Decay Of Disregard’ from their current album The Banished Heart.  Lurching through the song with just as much brooding intensity as the recorded material, I finally got to see in person how this band is the genuine article, and how amazing all the performers are. Gilbert sung her heart out and commanded the crowd’s attention with her angelic tone.

The group then followed up the opening song with ‘Fleeting Vigilance’ and ‘At Dawn’, comprising the first three tracks of the latest album.  It was amazing to finally hear these songs live and played right in front of me, with the members all showing their passion and giving 100% to the crowd.  ‘A Path To Broken Stars’ kept the momentum going and the crowd enthralled, and then their biggest hit and crowd favourite ‘Winter’ was played to us. This is the song that really made me fall in love with the group, and I felt blessed to be able to hear it in a live setting.

The band then finished their set with ‘No Color, No Light’ and gave us all a lasting memory of their unique brand of metal; and the determined vibe of the group wasn’t lost on the Toronto metal faithful, with a great reception given to the Texas natives.

I think most of us were on a high from the previous two bands giving their all, and knowing how the headliner performs, we all knew that we were due for a rousing set from Insomnium. The great thing about this tour is the band is performing their incredible Winter’s Gate album in full, which is quite a feat considering the scope of music contained on that platter.  But like true pros, and showing an amazing energy that is hard to be rivaled in today’s metal climate, the Finnish group performed all the tracks with attention to detail and vigor, giving their all and leaving everything they had on the stage.

The enthusiasm of the group is something to behold as they didn’t let up and engaged the crowd through the seven tracks.  After hearing this album a bunch, and knowing how high it stood on everyone’s year-end lists in 2016, it was a great experience to see the group perform it live.

‘The Primeval Dark’, ‘While We Sleep’, and ‘Revelation’ were next up in the set list, representing the album Shadows Of The Dying Sun and giving fans something to dig into prior to the current album.

The band then gave a good nod to their vast recorded catalogue with tracks such as ‘The Killjoy’, ‘Weather The Storm’ and ‘Ephemeral’ before harkening back the Shadows… era with ‘The Promethean Song’.  And after that mammoth set, the fans, still clamoring for more from the group, were treated to an encore with ‘Only One Who Waits’. The crowd sung to every lyric and pounded their fists to end the show on a high.

To summarize the evening, the crowd was into everything presented to them, and gave back their energy to the bands so that they all performed at a top-notch level.  It was great to see all three groups in a live setting for the first time, and I would implore anyone to go out and see them all when given the chance.

All three bands were hanging about at the end of the night, conversing with fans and giving friendly conversation. Personally, I had a great chat with Anthony and Cammie from Oceans Of Slumber, with my friend and I chatting with Cammie for around a half hour and really getting the sense that she and the rest of the performers love their fans.  Seeing this display of genuine thanks and warmth for all of us that attended really capped off the night in a great way.