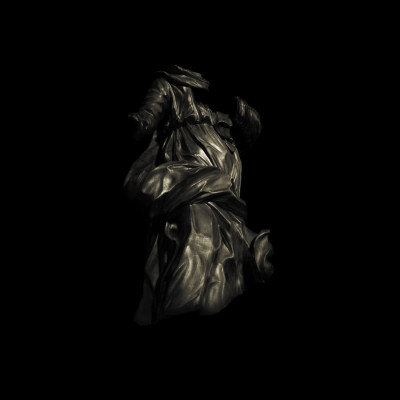 In the most recent series of Will Sharpe’s Flowers, the daughter Amy – a visionary but deeply discomposed musician (played masterfully by Sophia Di Martino) – is engulfed by the desire to pen a gothic opera based upon the folk-horror tale of her ancestors. She believes that, in doing so, she will achieve a form of redemption that will disperse the spectres of bi-polar disorder and depression that cast long shadows over her family. Her music is increasingly erratic and frenzied. The scores she writes are often abstract symbols and impenetrable scrawls. Yet, towards the end of the series, there is a breakthrough and the music gels, lifts, soars. From out of the mire we catch a glimpse of the exultant music that could vindicate the Flowers. Just a tantalising snatch of sound. With Traces, Warsaw-based cellist Resina has somehow managed to embody this spirit of New Weird Britain and has created a work that seems to fulfil a fleeting promise for the land of the label putting out her new record (Brighton’s own 130701 Recordings).

Where Flowers focuses on the heartbreaking, although often comic, internal tussles of a dysfunctional family, Traces has a much broader reach. It explores the dark aspects of human aggression, of ravaged time, of spiritual fulfilment clashing with ailing memory and the fear of not knowing what has been lost. It’s also incredibly transportive. On tracks like album coda ‘Lethe’ and also ‘Glimmer’ we are taken to palatial worlds that might have leapt from the mind of Tarkovsky. The former bristles with distorted drones as though a stomped on past is attempting to rear its forgotten head. Here the vocals are eerie, earthy, ethereal. They float through vast stone rooms punctuated with marble pillars. A sunken pool scatters glints of light across a large domed ceiling. ‘Glimmer’ is even more exploratory. It’s tantamount to sending signals out into a cold ether. The sun may be glaring as I type this but the music conveyed is spacious and fathomless. It calls to mind fingers dancing on the air, trying to catch the breeze.

Other pieces step into oneiric plateaus or states of religious fervour. ‘Trigger’ is a looped nightmare of gritty, clipped, tumbling notes that form a lurching rhythm for jarring strings to sigh against. Bows slur from top to bottom like they are tumbling down an infinite stairwell before a break gifts the opportunity to try a slow drag back up the cold flagstones. But the top will never be reached. On ‘Procession we get tiny shuffling stabs that spar with languorous, flowing bass notes. This is tersely broken by sharp squeals that verge on Penderecki-esque. Slowly percussion creeps in, swirling in a manner akin to a lost and frantic dream that scrabbles into consciousness, desperate to find that ancient grandfather clock announcing an unexpected hour. ‘Surface’, however, feels grandiose. A discussion between gods that has been intercepted. Their language too unfamiliar, too complex for our simple ears. Yet, in some way, its gutsy meaning is conveyed via goosebumps and distended neck hairs.

Tracks end abruptly. They disappear unexpectedly or decompose like sand structures swamped by a confident tide. The opener ‘In’ starts with a loop of triumphant flourishes. Embedded inside which are trapped wordless voices and thickening layers of strung praise. Each nestled loop forms something previously unheard within the other parts. A lens that tightens the angle and adds to the growing intensity before it all disappears in a musical puff of smoke. ‘Resin’ starts even more urgently. Here percussion is promoted to tom thuds that whisper of war. Echoing the hearty pounds of young and damp-palmed ideologies. This becomes stern. A dismissively arched nostril curls a top lip into a snarl.

The voices glimpsed on ‘In’ reappear, full-blooded, towards the back end of the album. ‘In In’ contains a clear collision between shifting shades. It’s not just a battle of light and dark but the entire spectrum in between. Bows slice notes. Knife them. Other sounds are born from a smoother, booming, beginning and then they too vanish into a decaying void. The vocals are suggestive of an otherworldly plain as electronic bass fuzzes, droning a warped flutter to the fore and the drums add a muscle that juxtaposes the voice’s fragility.

But it is on the longest piece on this record – ‘Leftover’ – that we descend into truly dark subterranean frequencies. Frequencies that, when listened to on headphones, seem eager to rearrange the molecules specifically in my left ear. There are swoops and snippets all telling of a distant ache. And also a hunger. If strings could give curt replies, this track would be quick of tongue. This is one to immerse yourself in. It is easy to disappear within the folds of time. Feel them slip away like lost memories and dreamt lives. It’s a haunting journey before the aforementioned redemptive final piece changes gear, gently lifts these ephemeral wraiths and bestows them to sacrosanct and luminous worlds beyond our prosaic comprehension.