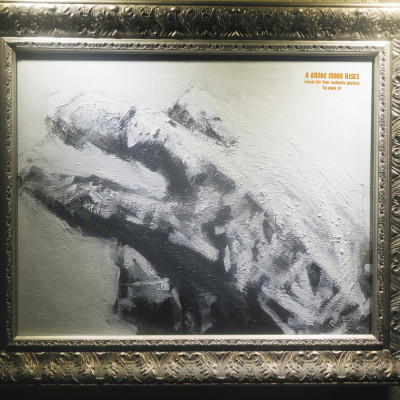 Papa M or David Pajo, whichever way you want it is one of those elusive musical figures that you never know what he is to come up with, whenever he decides or has the inspiration to do so. Whether it is his seminal work with Slint and Palace or no less seminal solo work under the Papa M or birth given David Pajo name, you can always expect the unexpected. Or expected. You can get the fuzzy guitar freakouts, post-rock of his first solo album Live From a Shark’s Cage, gentle folk/pop of Whatever, Mortal or anything in between. Or any other direction, for that matter.

With A Broke Moon Rises, his first since Highway Songs (2016), that had everything on it from grunge metal to electronics, he seems to have come up with an instrumental combination of his first two outings.

The album is something of a pure meditative piece, with Pajo mostly on his acoustic guitar creating pieces that are a pure atmosphere, somewhere between backing Will Oldham and John Fahey at his most gentle. The music’s slow shifts create a specific nocturnal mood, as if it is all late night or rainy days that don’t end, with ‘Walt’s’ being a particularly impressive theme.

Pajo’s concept and breadth of knowledge in creating an atmosphere are underpinned by his version of Arvo Pärt’s ‘Spiegel Im Spiegel’, turning the album into some sort of a spiritual experience. While seemingly lite on its surface, A Broke Moon Rises (a title Pajo took from his son’s comment on seeing a half-moon), Papa M is able to conjure exactly the musical theme and images he sets out to do, probably the hardest thing to do with this kind of atmospheric music.