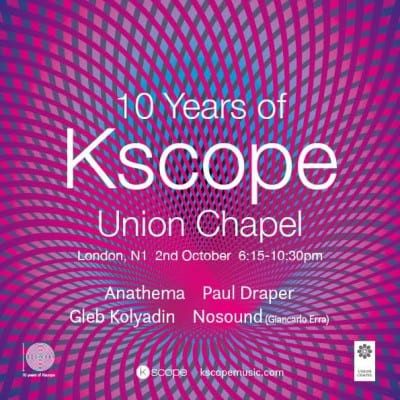 If a 20-year-old label celebrating a decade of activity is an odd proposition, so is the first half of this concert, hosted in the stately, ceremonial space that is Islington’s Union Chapel. Seemingly intent on showcasing as many of the label’s wares as is possible given time constraints, artists are limited to short “unplugged” sets. This means the musicians barely have time to warm up, and similarly the crowd have little time to warm to each artist. The overall effect is akin to a variety show, and it’s far from the most effective way to present the label’s riches.

The poster had advertised this evening as a four-artist bill. Perhaps its churlish to complain at the plethora of special guests wheeled out this evening, but, like listening to a disjointed compilation album, the overall effect of this breathtaking first-half is less than the sum of its occasionally excellent parts.

Kscope’s desire to flesh out the bill can be attributed to UK Visas and Immigration’s beguiling decision to restrict Marjana Semkina, iamthemorning’s vocalist, from performing this evening. Semkina has since been awarded a Tier 1 Exceptional Talent visa, making the senseless decision to refuse her this show all the harder to stomach. Semkina’s on a UK label celebrating an important anniversary. The singer, crowd and label are all losers here. Let’s hope this isn’t a taste of what’s to come as the UK seeks to politically isolate itself from its European cousins.

Giancarlo Erra, of Nosound, opens proceedings. His solo set is simply too short, and the dark precision of his songwriting fails to hit home in a cavernous space with echoey acoustics. Part of Nosound’s appeal on record is the instrumentation and orchestration that bring his songs to life. Tonight, Erra does nothing wrong, yet one suspects his turn here won’t help shift many units of Allow Yourself, Nosound’s stark new LP. If only No-Man, rather than Nosound, had been available to open tonight’s show.

None of the furore surrounding Semkina’s inablity to perform impacts on Gleb Kolyadin’s solo efforts. Without the singer in tow, iamthemorning’s pianist lives up to his virtuosic reputation, performing a cadenza-like tour through the themes of his latest record, except as his opening gambit! Overtly romantic yet seemingly impressionistic at the same time, this tour de force manages to reference Liszt, Chopin, Rachmaninov, Shostakovich, Tchaikovsky, and a host of progressive reference points, most notably Genesis. All this whilst retaining his own distinct personality. Clearly capable of having gone down the conservatoire route, classical’s loss is prog’s gain.

With his gift for melody to the fore, it becomes apparent during Kolyadin’s second piece that his is a singular talent. For a long time, the assertion that Rick Wakeman was the best keyboardist in prog has been relatively unchallenged. Finally, here’s a pianist to take Wakeman’s crown: all the more impressive an achievement given Kolyadin’s compositions channel his sensitive, introverted nature into sound.

Kolyadin springs the evening’s first surprise, inviting Steve Hogarth to join him for a phenomenal rendition of ‘The Best of Days’. Hogarth provides the second surprise unaided, taking to the piano for an impassioned ‘Fantastic Place’, and a sombre ‘Hollow Man’. H may not be able to play like his young collaborator, but he captivates the audience and draws them into the song – a masterful performer. Both Kolyadin and Hogarth receive the hearty reception their standout turns deserve.

Introduced as “Welsh heavy metal”, Godsticks perform without drums, and demonstrate flashes of brilliance in their two-song set. The acoustic format works surprisingly well, thanks to inventive rearrangements of the material. ‘We are Leaving’ is particularly suited to this stripped-back treatment and, unlike Giancarlo Erra’s earlier efforts, the piece is enhanced by the venue’s spaciousness.

Paul Draper takes the unplugged vibe too far to begin with, forgetting to plug his guitar in and offering no amplification whatsoever! It’s not the only error: he repeats verses as lyrics evade him, and he shys away from some top-octave passages that, when his voice is at its best, elevate the songs that contain them. Guitarist Ben Sink plays brightly, throughout, and there’s an enjoyable musical dialogue between their guitar parts.

In Draper’s favour, he has quite a song book to dip into. Mansun’s ‘Disgusting’ is not the album track most would have been expecting to hear, ‘Friends Make The Worst Enemies’ is on par with some of his best work, and, of course, ‘Wide Open Space’ brings the house down. It’s not bad for a musician below their own personal par, tonight.

The second-half of the evening is devoted to one band. It’s some headline set from Anathema. From British Sea Power to Wardruna, some of the most memorable nights at the Union Chapel have taken place when artists have put the venue to good use. Anathema do this with a refined light show and new on-stage formation, with Vincent Cavanagh guarding the rear on keyboards, and Daniel Cavanagh providing the visual focus at the front of the stage, alongside Lee Douglas, in possession of an angelic voice fit for such environs.

Billed as their Ambient Acoustic tour, their set is far from either, with drums, synths and electronic percussion key components bolstering the guitars and voices. Every track is a winner, from the epic swells of ‘Springfield’ to the terse, jerky rhythms utilised on ‘Can’t Let Go’. The rearrangement of ‘Thin Air’ sees elements that previously fought for space given room. ‘Distant Satellites’ would be a set closer for many bands, and has enjoyed probably more rearrangements for different live outings than any song in their catalogue. In this form, it’s sleek and powerful, as the band reach to the emotional core of the song.

Many of the interpretations feature deep, bassy thuds, that resonate around the venue. It’s a bugbear, then, that every time one of these kicks is introduced, Danny Cavanagh exhorts the crowd to clap along, which they do with so much gusto it detracts from the subtleties of the music produced on stage.

Anna Phoebe is the last guest star of the evening, weaving her violin lines over tracks including ‘Anathema’, and playing with a haunting reverb during ‘A Natural Disaster’. ‘Untouchables’, parts one and two, conclude the set, with some in the audience reduced to tears, not aided by a lighting malfunction that makes the line “I’ve never seen a light so bright” a very literal possibility!

Both parts of ‘Untouchables’ are dazzling, the new arrangements throughout being the equals of their more rock-oriented originals. Tonight and presumably elsewhere on this tour, fans are being afforded an opportunity to see Anathema through a prism, immediately recognisable yet with their constituent parts exposed to give a refreshing take on familiar material. With performances like this, Anathema are asserting themselves once again as one of the most creative bands around today.