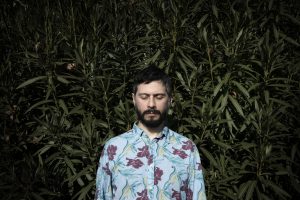 On the 15 June, Italian-based collective Lay Llamas released their second album, the critically acclaimed Thuban – a travelogue powered by a pan-global fascination with rhythmic hypnosis and an unquenchable experimental mindset.

Since the album’s release Nicola Giunta, the alchemist behind Lay Llamas decided to revisit tracks off the album, and the first ones to be released are the non single tracks ‘Coffins on the Tree, A Black Brain On Our Way To Home’, which features vocals Luca Giovanardi from fellow Italian band Julie’s Haircut, and the mighty ‘Fight Fire With Fire; which features the poignant spoken word from The Pop Group’s vocalist Mark Stewart.

Nicola said “These two tracks represent a step ahead, or better, inside the sound material which Thuban album is made of. The dub music concept itself is basically about the process of stripping down, filtering and modifying that lead the original track into a new dimension. It’s like bringing out new and precious objects from a well known cave. Objects sometimes hazy, not so in focus, but warm and rich of memories heritage anyway. Filtering through a burnt lens. Like the tale from a last night dream that you can’t remember in details but you need to bring out anyway. A different point of view.”

Treat your ears & have a listen.