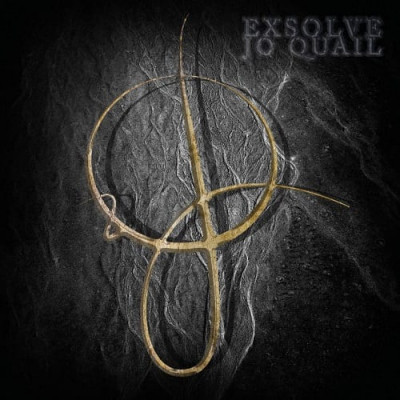 Exsolve is cellist Jo Quail‘s fourth full-length album of new material, and it marks a departure of sorts. Her earlier work was chiefly in the form of shorter tracks that either were built upon conventional song structure, or served as atmospheric vignettes that effectively captured a mood or emotion, but Quail is no stranger to longer-form pieces. Her previous album, Five Incantations, saw her employ the looping techniques and electronic effects she is known for on longer pieces. Her new record, however, sees her stray further than ever before from her earlier approach.

The opening ‘Forge/Of Two Forms’ is perhaps the ultimate expression of the sense of freedom that runs through Exsolve. Over its nearly 18 minute running time, it builds steadily from its eerie opening, gathering momentum from Quail’s striking lead playing, which surfs over looped atmospherics conjured by Quail herself. She is ultimately joined by guitarist Dan Capp of black-metallers Winterfylleth, who weaves an intricate web of electric guitar in and around Quail’s lead part. As the track title indicates, this really is comprised of two pieces. After the first part, ‘Forge’, builds to a crescendo, the remaining track time is given over to the acoustic ‘Of Two Forms’, which showcases Quail alone; after the thundercloud of looped percussion and guitar ebb away, Quail’s solo cello is a thing of mournful wonder; soberly reflective, this section is effortlessly emotive and clear evidence that Quail doesn’t need her looping wizardry to hold your attention.

Second track ‘Mandrel Cantus’ is far more propulsive, possessing a real urgency right from the opening bars. Once more, a guest guitarist – this time Nik Sampson of Devilment – is Quail’s collaborator, and it is intriguing just how different Sampson’s approach is to that of Capp on the opening track. Sampson’s idea is to use Quail’s pulsing rhythms as a launchpad for some spectacular technical soloing; after accompanying the insistent pizzicato of Quail’s lead part with cavernous power chords, Sampson finally delivers a melodic lead that dissolves into a devastating solo. Sampson’s sonic fireworks provide the perfect pay-off to a memorable and powerful piece.

Third and final track, ‘Causleen’s Wheel’, eschews guitar completely, Quail delivering all of the music using her cello. It never ceases to amaze just how formidable Quail can make her instrument sound, with or without looping techniques: here Quail hammers out some thundering doomy riffs as readily as she produces the keening Celtic-influenced lines that open the track. Like the opening track, ‘Causleen’s Wheel’ unleashes its power slowly and sparingly, the opening lament evolving slowly into a string quartet-style piece and ultimately into a wondrous hybrid: half doom metal, half Celtic reel, as powerful as the former but as giddily nimble as the latter. Her collaborator on this track is previous collaborator, vocalist Lucie Dehli, who delivers spectacular wordless vocalese that hangs, ghostly, just out of sight amongst the shadows, before joining Quail for a thunderous tribal finale.

It’s hard to know exactly where to place Exsolve; its strength is that it effectively straddles genres and musical forms and melds them into an entirely natural fusion. It is clearly influenced by the time Quail has spent supporting acts such as Winterfylleth, but whilst post-metal and atmospheric black metal are influences, this record is more than an addition to that canon. There are influences from classical music – naturally enough, perhaps, since the minimalism of Pärt and Glass lends itself so well to the use of looping techniques – but Quail’s music is also reminiscent of the rumbling world music fusions of Peter Gabriel and the long-form instrumental compositions of Mike Oldfield in its intensity and adventuresome spirit.

Exsolve is a stunningly evocative and atmospheric record. With this album, Quail has taken a confident step towards a more unfettered means of expression; hopefully this charismatic, powerfully atmospheric and boldly exploratory record is indicative of even more potent music to come.