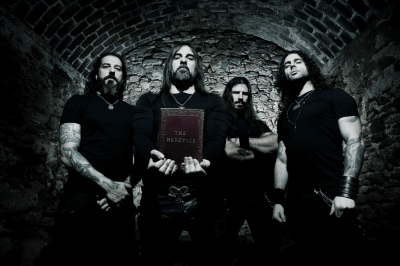 I feel like a citizen of the world. If we see with open minds, different cultures all have something to give you.

After the roaring success of 2016’s Rituals, and two stellar years of touring, Greek black metal legends Rotting Christ are gearing up for an excellent 2019. With a new album, book, and even a beer on the way, we sat down with vocalist and guitarist Sakis Tolis to discuss the past, present, and future of Rotting Christ.

E&D: Life seems pretty busy in the Rotting Christ camp: several tours in 2018, you’ve launched a new beer, and a new book, and a new album is on the way. Do you ever slow down?

Sakis: 30 years of history of the band. I can’t slow down! I’m addicted to creation, and to metal music! It gives me power – it’s the meaning of life for me. Since I remember, I consider myself more like a fan and then a musician. I have to create. It is the meaning of my life.

Sakis: There will definitely be shows. We will hit the road again, playing around the world. For me, playing shows is very good.

E&D: What inspired you to write the book and brew the beer?

Sakis: Dayal [Patterson] said “Saki, you have thirty years of history. Why don’t you write a book?” There is a whole era that is not written, not recorded – almost a myth. I like myths. But I said to myself I have some stories from back in the day to tell.

Sakis: A friend of mine, one of the best beer-makers, asked if I wanted to make a strong beer. I said yes, let’s make it black. Many people think we release albums just for money, but believe me, I want to create something that makes me rich in my soul. The beer is very good, it’s very strong.

E&D: I’d very much like to try some! Moving on though, where does the new album title The Heretics come from?

Sakis: Personally, I was influenced by people who were cast as heretics. It sounds weird, but all of those people open a lot of doors mentally. They were heretics, and we are heretics too, the people that follow this path. We are not pagans, but we have created our metal music, our black metal music as something heretical. I’m very proud to be part of this story. So this is why we called the album The Heretics.

E&D: Do you feel like you’re moving in a new direction with the new album?

Sakis: It’s similar to the other albums, but it’s also a step up, yes. We’re evolving, always.

E&D: This is the 13th album with Rotting Christ over thirty years. Do you ever feel like you struggle for inspiration?

Sakis: I struggle very much. I fight with my demons every day. I think a lot. I want to create new things, and explore music. That will give me power to live. I push myself to wake up and be alive.

E&D: You had Ashmedi [from Melechesh] as a guest singer. Are we going to see a tour with Melechesh next year?

Sakis: I hope so. Ashmedi is a very good friend, a very clever and nice artist. I would like to share the stage with him. He’s a very nice guy, that’s why I asked him to say something in the Arabic language.

Sakis: Irina is a Russian singer, and I wanted to ask someone from Russia to sing the Russian we’ve used.

E&D: What kind of traditional instruments are used on the new album?

Sakis: Not on this album. I made this album more metal, more based on guitars, more atmospheric, so it’s a more song-based album.

E&D: But it’s not a concept album? The songs are stories on their own?

E&D: What inspired you to use traditional instrumentation originally?

Sakis: Because I travel a lot and I meet cultures from all around the world and I want to bring them to people’s attention. I feel like a citizen of the world. If we see with open minds, different cultures all have something to give you.

E&D: Which artists, if any, inspired you most during the recording of this album?

E&D: Rotting Christ was originally a grindcore outfit. What first drew you to black metal and away from grindcore?

Sakis: Celtic Frost and Venom made me do it.

E&D: Would you ever go back to grindcore?

Sakis: No! I like Napalm Death, but I don’t want to play it any more.

E&D: You’ve said before that you think Christianity is one of the worst things to happen to humanity. Why do you believe that this is the case?

Sakis: Not nowadays that much, because Christianity doesn’t have enough power, but back in the day. Christianity, like all religions, has caused a lot of problems. I have realised that in the last years society has taken steps back. People are quite suspicious and afraid. There are some people though that make those steps up mentally.

E&D: What drew you to the occult/Satanic spiritualism your records focus on?

Sakis: I’m that kind of person. I want to search the dark parts of my soul. Everyone has them. I’m very lucky that I can express that with my music. It means I write music when I’m not happy – strange but true! When I’m happy I don’t want to grab my guitar! Of course, I want to be happy, but I cannot be happy all the time. So, when I’m not happy, I take my drug: I grab my guitar.

E&D: If you do admire any, which figures, like Aleister Crowley, do you admire in the world of the occult?

Sakis: Of course – I was influenced by people like that, and Zoroastrians, and religions like that. But I want to bring my own opinion as well.

E&D: Might there ever be an album based on the Greek myths?

Sakis: I think a lot of that is too touristic for me. Probably not.

E&D: What drew you to focus on Zoroastrianism on this album?

Sakis: It’s on the song I wrote with Ashmedi – it’s one of the oldest philosophies, so it’s quite heretical to write about something like this.

E&D: Referring to ‘For a Voice Like Thunder’, will you ever revisit the works of William Blake?

Sakis: I went this time with Edgar Allan Poe – this is why I asked Stratis to speak on ‘The Raven’: my accent is not English at all!

E&D: But would you ever revisit either of their works?

E&D: Are there any other poets who inspire you, or whose work you simply enjoy for its own sake?

Sakis: A Greek poet called Nikos Kazantzakis – I like very much his poems.

E&D: Finally, if we could see into your soul, which bands/artists, or albums, or songs would we see there?