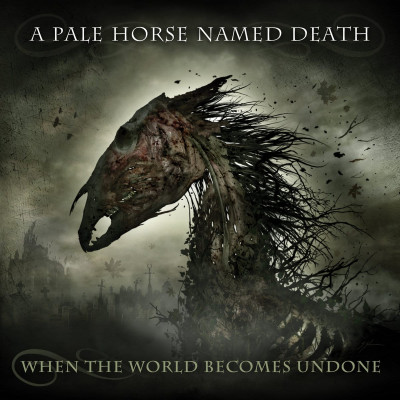 When The World Becomes Undone by A Pale Horse Named Death

Sal Abruscato is a name many metal fans will know from his time behind the kit of iconic New York bands Type O Negative and Life of Agony, but since 2011 he has also been the frontman of his own band, A Pale Horse Named Death, with fellow former Type O alumnus Johnny Kelly joining him after previously being a live member of the band. Now on their third album, the band have brought us another collection of sombre, melancholic doom packaged up once again in some fine Sam Shearon artwork. Interesting to see how the six years since their last release have treat the band.

The album opens with ‘As It Begins’, the first of three instrumental soundscapes that feature on the album, and the album proper opens with the title track, a sombre slow building six-minute song that builds from a a solo piano introduction and gradually adds layers until that familiar guitar sound comes in and you are thrown back to that glorious mid 90’s RoadRunner Records heyday. Lyrically, the mood is a bit of a throwback to those days too, with lines like “I’ve got a funny feeling that God is dead” from the title track, and the whole of the lead single ‘Love The Ones You Hate’.

The sound of the second half of the album switches slightly, with a more melodic – yet equally gloomy sound. It again features feature that monolithic guitar sound, but this time brings in some Layne Staley inspired vocals which adds a whole new dimension to the rest of the record, while still keep the mood. It’s like a mixture of Type O and Alice In Chains and every bit as interesting and confusing as that sounds. The best examples of this are ‘Vultures’ and ‘End Of Days’, and although it may seem a little strange at first, the more you listen to it the more it works.

With such a back catalogue of work, it’s difficult to figure out where this album rates amongst his other work. It’s undoubtedly a good album. It has a couple of tracks that maybe could have been cut, but they don’t have a massively negative effect on the album. There are some really catchy hooks, thrown in with the depressive tones and also that famous Type O dark humour that takes the album away from becoming too serious and within itself. Abruscato has been through quite a lot in the six years since ‘Lay My Soul To Waste’ and this release seems to find him finding some therapy from this album. The name of the last track might be a hint towards this.

If you like any band that I have mentioned here, there will be more than enough for you to check this out. The first release of the year I have been able to check out and we are off to a pretty damn good start.