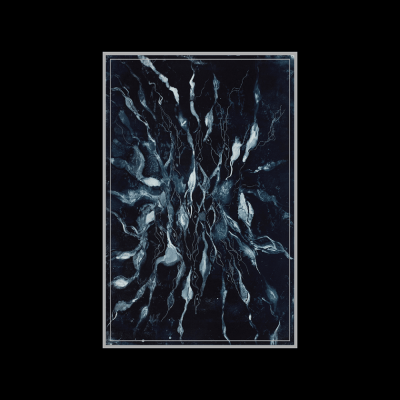 Void of Infinite Horror by Vessel of Iniquity

After several years of cutting his teeth in bands such as The NULLL Collective, Thoraxembalmer and The Uncertainty Principle, the prolific multi-instrumentalist and vocalist, S.P. White recently began releasing material under the name Vessel of Iniquity. This initially culminated in a promising three-track self-titled EP, released in 2018, which despite clearly having its roots in the black metal genre went far further into extreme noise experimentation than any of his previous material, dissolving fragments of grind, death and drone metal into a modern, inharmonious tessellation reminiscent, at points of the harsh discordant creations of Maurice De Jong’s Gnaw Their Tongues and the enveloping darkness of shadowy collective Sutekh Hexen.

Vessel Of Iniquity’s sophomore record and debut LP Void of Infinite Horror appears to be the continuation of White’s journey towards the outer edges of genre, as opening track ‘Invocation of the Heart Girt With a Serpent’ accelerates metallic blast-beats to an almost inhuman speed whilst phantasmal ambience and wraithlike howls coalesce in the background. The blistering pace slows to a doom-laden crawl on the following track ‘Babalon’, as a wordless, unearthly agglomeration collides with gloomy detuned guitar riffage and an ever-present subharmonic noise before being punctured by forceful, restless percussion.

‘Mother of Abomination’ proceeds in a similar fashion but exacerbates the already tense struggle between structure and disorder utilising regular temporal pivots and abrupt bursts of metallic dissonance to constantly threaten the integrity of the song’s structure. The resultant effect almost feels like it’s daring you to drift away from engaging with the track on your own terms. Rather than attempting to trace a path through the mayhem, White’s dense layers of noise almost encourage listeners to be subsumed by the music, the goal is perhaps in keeping with Vessel of Iniquity’s stated aim of complete dissolution, both of ones being and existence itself.

A brief moment of tranquillity arises on ‘Void of Infinite Shadow’ as a sorrowful post-metal riff cuts through ghostly, horror-filled noise accompanied by solemn percussion, before final track ‘Once More Into The Abyss’ leaves behind the bleak discord altogether wavering drones emerging from the wreckage, before being eclipsed by a ceaseless percussive thrum.

Listening to Void of Infinite Horror is like a slow process of self-abnegation, these aren’t so much songs to be listened to as structures to be lost within, or submerged under, before emerging renewed, all the richer for having had the experience. It’s a worthy addition to the canon of experimental blackened noise, and perhaps its idiosyncratic nature could be a way of bringing S.P. White’s unholy compositions to a wider audience.