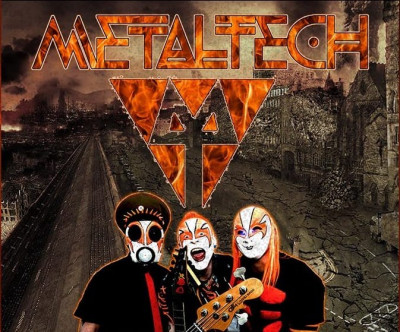 As England lies paralyzed and immobile under a suffocating blanket of snow, in places up to a terrifying 5cm deep1, the Insidious Doktor Mayhem is on a flight from China. This is important, for the Doktor is two sevenths of Metaltech, who will be celebrating their 10th anniversary in Opium tonight. Will he make it here in time for the gig?

In the meantime, I stand and chat with Mr John from InfiniteHive, tonight’s most excellent – and very tall – promoter. A man walks by, looking for the dressing room, wearing a pair of striped trousers and a frilly blouse the likes of which I haven’t seen since some forgotten hair-metal band supporting Whitesnake in 1984. This is worrying, as he seems to be from Gravelle, tonight’s main support act, about whom I know absolutely nothing2. However, I shall set aside my concerns for now, as we have Nightmare Frequency up first.

There’s going to be a bit of job-juggling tonight, as Nightmare Frequency’s front-man is Deano Cook, Opium’s regular, massively talented sound engineer. Twiddling the knobs for the two supports will be Gravelle’s usual sound-guy, I’m told, and Deano will be back behind the desk for Metaltech later. Assuming the Doktor turns up.

There’s an unsettling throb over the PA and Nightmare Frequency are on – Damien Quinn, a huge stand-up drummer in a kilt; Shian Blackwood, a hoodied and masked young lady making the clangs, beeps and squelchy noises; and Deano in front, skeletal, a man with his ‘vibrate’ function permanently on. They make a ferocious, glitchy industrial noise, all post-apocalyptic tribal body-paint and pre-apocalyptic rage. Deano is a feral beast, endlessly pacing his cage, hissing and spitting and lashing out at a rotten world. Near the front, we need to duck and dodge or be taken down by his flailing limbs. They snarl though most, or all, of their recent release, Incision and Drainage. They are intense, exhilarating, riveting and very, very angry. 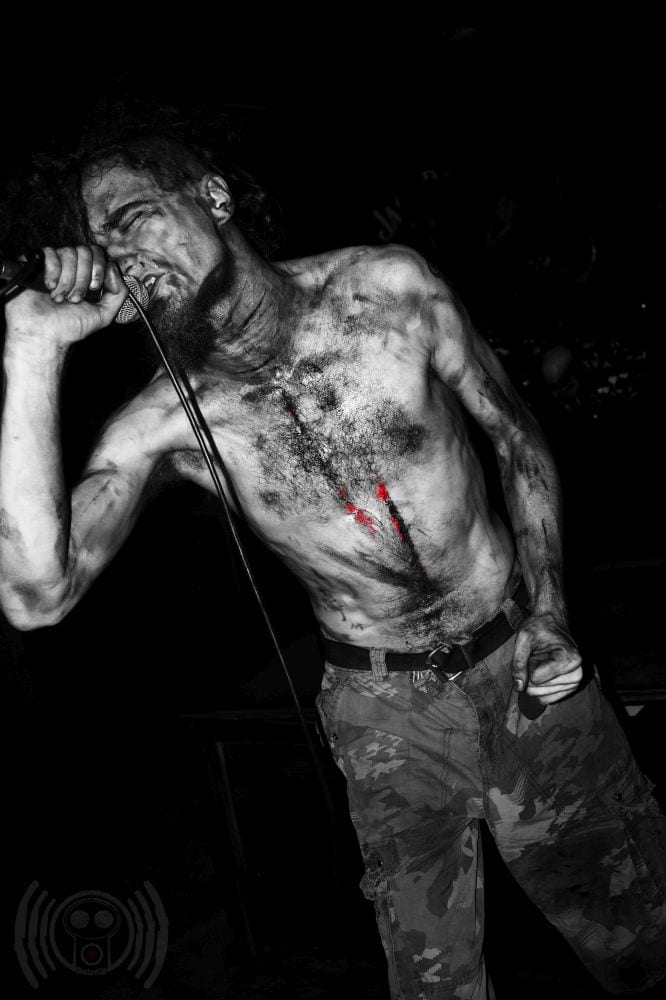 I have one tiny niggle with Nightmare Frequency’s performance, though. There is a point, near the end of their set, when Quinn emerges from behind his camo-netting draped kit and appears to attack Deano, throwing him to the floor and punching him repeatedly. Now, this would be fine if it was spontaneous, but it looks, to me at least, very rehearsed.

But maybe I’m wrong, and they really hate each other.

So, it’s the man in the trousers next. Well, not him on his own, obviously, Gravelle3 are a duo.

You might have seen, recently, Santos from Old Man Gloom writing a preview of the Roadburn festival, based solely on promo pics of the bands. Well, I confess to being guilty of something similar with Gravelle. I have seen photographs, but have never heard any of their music, and I am expecting some kind of foppish art-school guff. BUT OK, I ADMIT IT, I AM WRONG. Please don’t kill me. 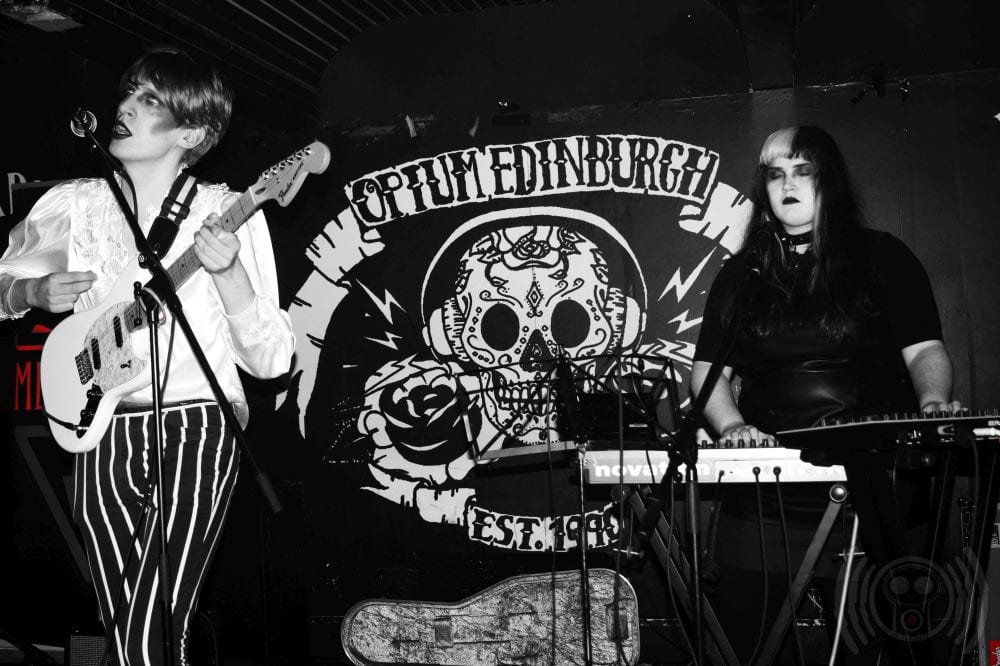 Anyway, like I said above, there’s two of them. Kyle, with the trousers, singing and guitaring, and Monique, doing the other singing and playing the things with knobs and buttons. Instead of the waffly nonsense I was anticipating, they do a dancey kind of post-punk thing, with teeny hints of goth and the occasional sprinkle of Duran Duran-ish new romanticism.  It’s a bit spiky, and a bit abrasive. Monique’s voice exists in a place somewhere between Siouxsie and Poly Styrene from X-Ray Spex. Kyle still holds his guitar as if it were a teddy bear, but he attacks it with considerable gusto. They have an EP out, Liquid Skin, and they play songs from that, and more. They swap places for a song, and swap back. Kyle dances like a puppet being worked by a drunk man. Other than that, they don’t do a lot, there’s no ‘show’. But that’s fine. The audience seems to like them, and my feet are seen to tap a bit. I am won over.

So, has the Doktor made it in time? Of course he has. And now he joins Erik Tricity (two sevenths, guitar & singing), Lord Thrapston Flagellator (two sevenths, Bass) and Gunter McMonstril (one seventh, a laptop)4 . Metaltech are ready and set to go.

Have you seen Metaltech before? Yes? Then you’ll know what we’re looking at right now. If you haven’t, then imagine that you have given some Kiss action figures and an orange Sharpie to a hyperactive child, and you are now looking at the result. In addititon, Erik is wearing some kind of fluorescent-orange fur bolero and ear-muffs, and carrying a Louis Vuitton carrier bag stuffed with… stuff. Orange stuff, probably. 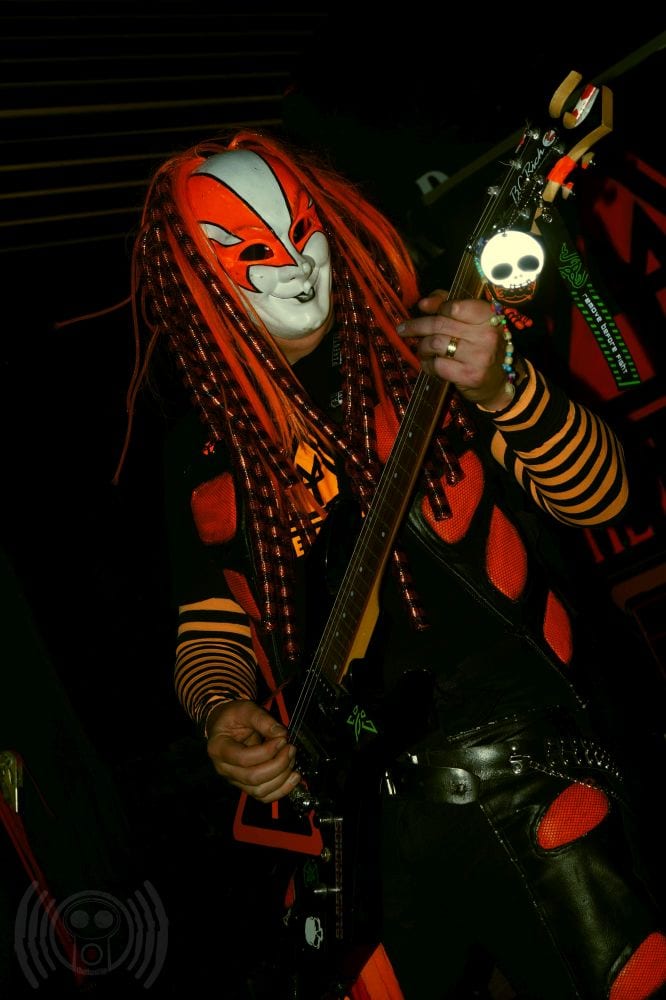 Confetti cannons (orange) are distributed and discharged, and Metaltech are off. I have bits of tissue paper inside my shirt.

Again, if you’ve seen them before, you’ll know what we’re listening to. They don’t have any new songs to promote5, they’re just here celebrating being a thing for ten years. For the newbies, in a nutshell, Metaltech mix the cocky strut of Kiss with the industrial thud of Rammstein backed by what I am told are ‘banging techno beats’ from Gunter the laptop. If it helps, they freely cite Cubanate as one of their major influences. The only face we can see belongs to Erik, grease-paint white with Metaltech’s trademark orange flashes. The mostly immobile Lord Flagellator hides behind a cyberpunk gasmask affair, the Doktor behind a genuinely spooky blank-faced doll mask, festooned with orange tendrils. Otherwise, they’re all black ’n’ orange-leather and studs. and boots you could kick down a wall with. Erik does the foot-on-the monitor thing more than once. 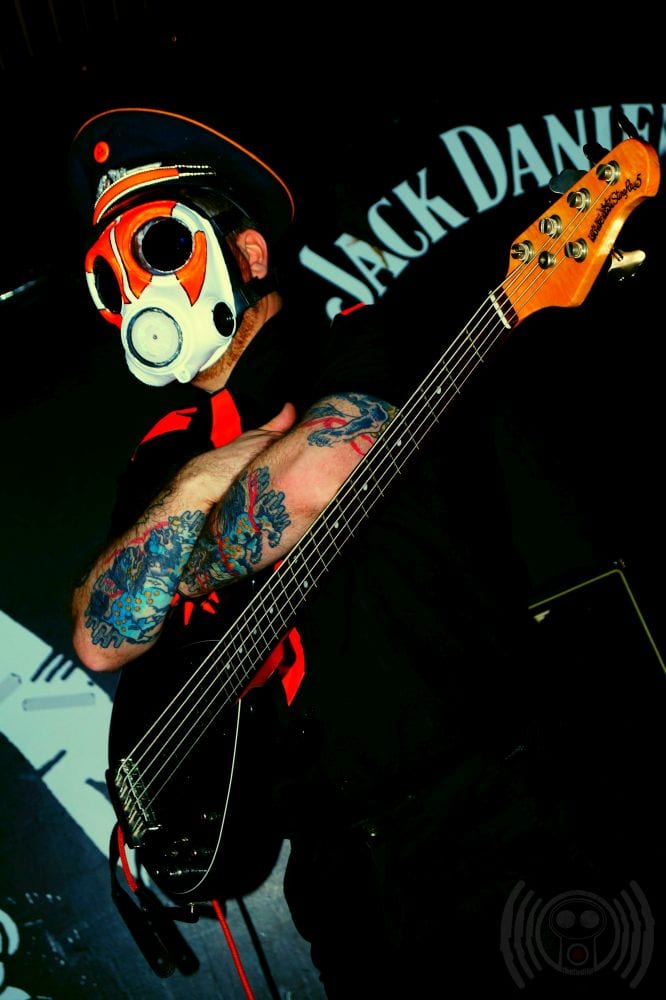 They go about their business with all of the same vigour that they had all those years ago6, rattling through what appears to be their entire repertoire of songs. They play ‘Kontrol’, they play ‘This Kiss’, they play ‘Slam Trance’. They play their greatest hit, the nihilistic cure-for-everything ‘Burn Your Fucking Planet’ which EVERYBODY knows and sings along with. They play their homage to Rammstein, the remarkably accurate ‘Hammstein’, complete with (possibly nonsense) German lyrics and pound-store pyrotechnics7.

As expected, various things are retrieved from the LV bag and offered to the crowd, so we too can be a part of the show. Glowsticks are waved, party-poppers are popped, silly-string is skooshed. It’s all deliberately cheap ’n’ cheerful, and delivered with a knowing grin and tongue firmly in cheek. Erik KNOWS they’re not really Kiss, and they’re not playing Wembley Arena, but NOBODY CARES. It’s all massively entertaining and the turbulent crowd is having a ball. It’s really refreshing to see an Edinburgh crowd being so exuberant. It’s not often like this on a Sunday night in February. 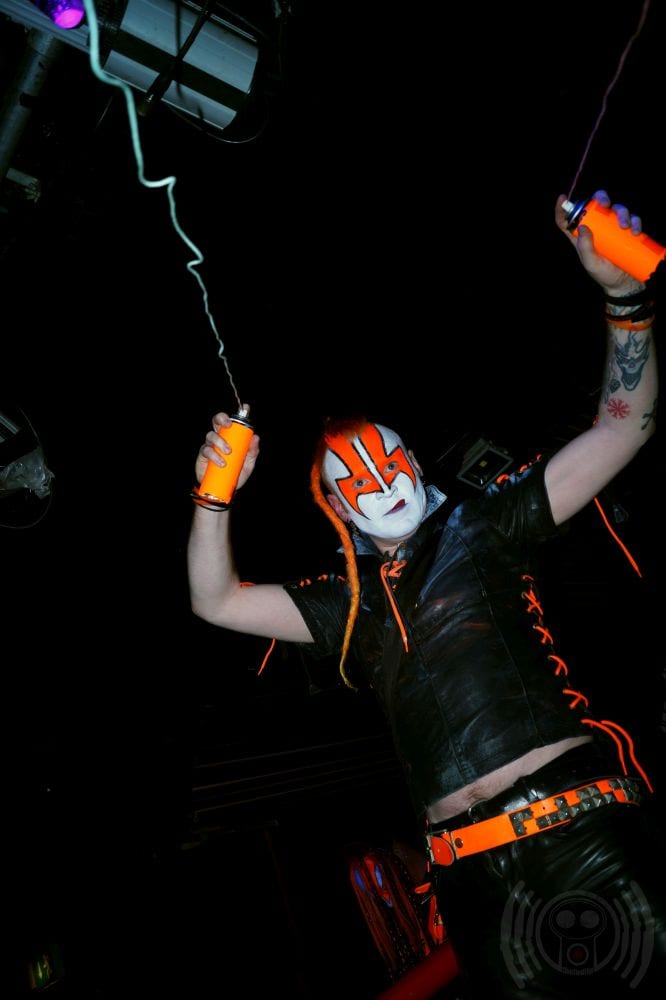 Yes, it’s cheesy and yes, it’s sleazy but, dammit, Metaltech are just so much FUN.  Mind you, I’d hate to have to clean the place up afterwards.

When I head out, I see that it has been snowing. There’s maybe 2mm of the stuff on the ground. I might never make it home.

P.S. If you fancy catching Metaltech, they – and Nightmare Frequency – are playing at Bannerman’s in Edinburgh on 25March, supporting Japanese cyberpunk maniacs PsyDoll. Expect mess. 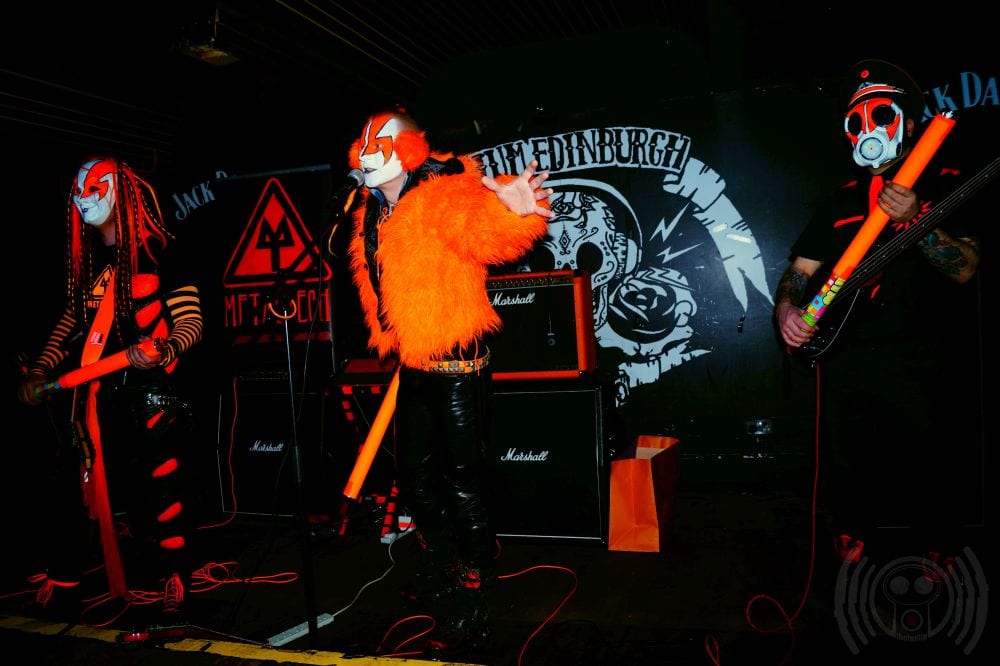