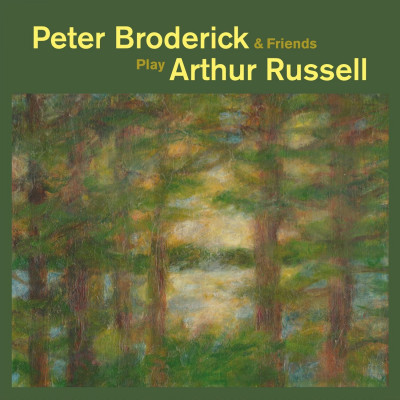 Arthur Russell’s spirit keeps reappearing. It keeps insisting. From 2008’s excellent documentary, Wild Combination, to the addictive power pop of Event Horizon (The Necessaries’s classic reissued in 2017), we are never far from (re)surfacing work capable of peeling back the layers on this enigmatic creative powerhouse (albeit one who struggled with completing his compositions). But, with each freshly lit perspective comes intrigue, insight, and further intricacies. The problems faced here, by multi-instrumentalist Peter Broderick, are two fold:

1. How do you select a record’s worth of songs from such a bountiful stockpile?

2. And how do you stay faithful to Arthur’s intentions?

There are a plethora of ways in which to approach an album of covers. A straight note for note repeat is rarely noteworthy. The thin line upon which musician’s often balance has, on one side, notions of retaining a semblance of the original aim and tone whilst, on the other, the need to generate something that is starkly the artist’s own. In the case of Woman’s Hour’s cover of ‘Dancing In The Dark’, they take the hint of despondency at the heart of Springsteen’s recording and expand this into a slowed down, deeply resonant, drift. Going even further in this direction was Portishead’s reimagining of Abba’s ‘SOS’ as a tribute to the murdered MP, Jo Cox. They cleared away the schmaltzy pop trinkets and sank it down into forlorn depths. Into a space which the lyrics initially seemed to speak of. This allowed the song to become the desperate cry for help which it gave the impression that it always should have been. Whilst there is something to be said of juxtaposing lyrical content with melody, sometimes pairing these things up can deliver a far heftier double blow which speaks directly on a gut level. It can be a statement as unequivocal as phlegm in the eye.

It’s fair to say, then, that creating an album of covers, particularly of works made by such a revered, borderline cult, artist, contains a myriad of potential pitfalls and struggles. Fortunately, working already in Peter Broderick’s favour, is a similar, ghostly, Russell-esque quality to his voice. A little quaver which appears wavering with emotion, as notes flit from throaty lows to pinched highs. This is perhaps most uncanny on ‘I Couldn’t Say It To Your Face’ in which we have Broderick singing the phrase – ‘It’s my word. It’s my song’ – a line written by a musician whom he was never able to meet. When coupled with the chorus these words take on a deeper meaning than was, conceivably, intended. With Broderick as a conduit there is an evident blurring of realities.

As you might expect from a former member of Efterklang and Horse Feathers, there is a folkier vibe to the music too. Broderick has also shied away from the spacious and glacial atmospherics which emerged on 2017’s All Together Again. Those electronics are replaced by his tender voice which slips easily into the earthy tones of Arthur Russell. The magical idiosyncrasy which seemed enough to brand Russell as beguiling during his lifetime is resurrected here by Broderick. The haunting balance between deep-seated melancholy, chirpy rhythms, and wistful minor chords don’t feel as if they have been copied from Arthur Russell’s playbook so much as torn right out. Ambience was another vital aspect of Russell’s approach. He loved the hiss of his walkman, bubbling fishtanks, and the drone of a blender. Echo was so vital that he entitled his only solo record after it. So it is fitting, then, that on ‘You Make Me Feel Bad’ there are slurred cello strings lost in echo. Voices that chatter and surge with delay. They swirl like reams of tape tracked and tacked on top of each other and then disappear into haunted whispers like the breathy secrets of apparitions. Similarly ‘Losing My Taste For The Nightlife’ is doused in reverb washed vocals and the thrummed strings provide an ambient backdrop for Russell’s spectre. If The Caretaker trades in the ghosts of ailing memory, this is memory evoked, recalled, worshipped. It places Russell as hallowed and divine.

The seeds for this delve into Russell’s back catalogue were originally sewn when Peter Broderick was invited by Rasmus Stolberg to perform a set of Arthur Russell interpretations at a Danish festival. Upon hearing the result of this, Russell’s long time partner and owner of his musical estate, Tom Lee, reached out to Broderick to thank him for his generous performance. This, in turn, led to Peter Broderick gaining unparalleled access to the expansive (and largely unheard) Arthur Russell collection. Russell was known for his boundless creative energy, even when nearing the end of his life, and would often record a multitude of variations of each song, trying out different edits with different beats and different arrangements. The track ‘That’s Us/Wild Combination’, for example, was something that he worked on for 5 years before finally deciding on a definitive version. Whilst Russell’s music flirted and entrenched itself within a vast array of genres and, in the case of ‘Go Bang’ (released under the moniker of Dinosaur L with Lola Love), even inventing funky new forms, Broderick has opted here to, primarily, stick to the cello-driven indie pop which populated World of Echo. The closest that we get to propelling mutant disco is the kick drum slap on the reworking of the aforementioned ‘That’s Us/Wild Combination’. This version evokes the feeling of fingers of wind stroking strands of tousled hair as it flutters through the cracked window of a car speeding down a sun-dappled highway. Most of the versions on this record remain loyal to Russell’s previously released recordings but one exception to this is ‘A Little Lost’ which is manifested in a ska dub style that isn’t anywhere near as jarring as that might at first sound. The blend of baseline and horns adorn a fan favourite with a bent knee swagger whilst the the lyrical melancholy contrasts with upbeat rhythms and a brass section that can’t quite escape the track’s lachrymose trappings.

In order to realise this project Peter Broderick cobbled together the ‘& Friends’ of the album’s title. These are comprised of family members from both Broderick and Russell’s clans as well as a raft of musicians including Peter McLaughlin (who runs the Pretty Purgatory record label), David Allred (previous Broderick collaborator and fellow Erased Taper), and Daniel O’Sullivan (a multi-talented musician who has worked with Sunn O))), Æthenor, Ulver, Grumbling Fur, and Alexander Tucker). And, on ’Ballad Of Lights’, we also get a delightful and, even now, rarely heard West Country accent filling in for, arguably, the most famous of the beat poets. Broderick’s 7 year old stepson had to be bribed with €30 and the promise of a trip to the toy store in order to record the spoken word intro but, considering the hope-saturated floodplains which overflow within young Seán Power’s pronunciation of “Life”, I’d say that he picked up a bargain.

Amongst the 10 tracks on this album two are previously unreleased. The opener, ‘Words of Love’ hadn’t even been heard by Russell’s partner (who also contributed the album artwork) and, in many ways, this serves as a little time-travelling gift which Peter Broderick has been able to deliver as if spurred on from the past. It was encoded for the one but is relatable to so many. A large number of the pieces that Russell recorded were written during the day whilst Lee was at work. They serve as a sort of diary for Russell’s thoughts and emotions. Things that he wished to but, perhaps, couldn’t quite say. Hearing these transported to the present must be like uncovering secret messages or lost love letters. The closing piano ballad, ‘You Are My Love’, features vocals by Russell’s niece – Rachel Henry. What might sound like the reading of one final love letter almost certainly isn’t that. With thousands more recordings still yet to be unearthed, it seems inevitable that Arthur Russell hasn’t finished with any of us just yet.