(((O))) Review: Amanda Palmer – THERE WILL BE NO INTERMISSION 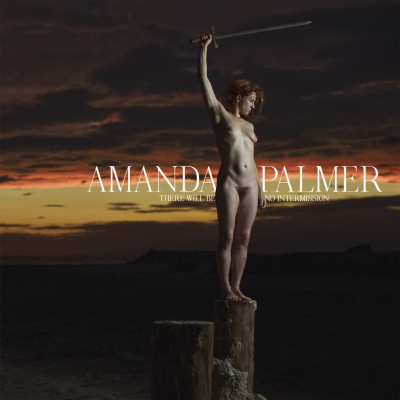 THERE WILL BE NO INTERMISSION by Amanda Palmer

To describe this as simply another album would be a tremendous injustice. There Will Be No Intermission is the most unashamedly frank, political and confessional work of art conceived by Amanda Palmer to date. This project has been entirely crowdfunded through Patreon supporters and released through Cooking Vinyl on March 8th this year.Death, grief, abortion, feminism, oppression and fears of motherhood are at the forefront of Amanda’s most recent message to the world.

There Will Be No Intermission combines 78 minutes of raw, heartfelt vocals wrapped up in bittersweet melodic piano, crashing percussion, sweeping orchestral soundscapes and a resurgence of Amanda’s ukulele. The lyrics are potent enough to smash your heart into pieces, but the music will fuse it back together stronger than before.

It is an album that is best consumed in one sitting, as emphasised by the title. Whether this is with friends that will hold your hands and then subsequently hold you, or alone with quality headphones and a tactical box of tissues.

Not every track is designed to be an outright tear-jerker, although ‘The Ride’ does an excellent job of it from the start. Amanda brings the pain and uncertainty of the world into sharp focus, before offering her hand and her heart to those of us that are desperate for something to hold on to. Juxtaposed with a gentle waltzing melody, reminiscent of fairgrounds and the innocence of childhood, she lays fear out on the table and wills us to ride with her.

‘Drowning in the Sound’ and ‘Machete’ however, are far from this in their stylistic approach. The former is a desperate shout into the void about the effects of climate change, the current political state of America and the overwhelming rapid onset of fear-mongering found on social media. The latter is a story of insurmountable grief, loss and anger. The guilt of moving on and the struggle of letting go of both a loved one and their possessions. Both of these tracks include Amanda’s iconic key-bashing piano and yelling vocals, backed up with heavy synth bass lines and masterfully crashing percussion. How do you go about telling everyone your world has fallen apart? That’s how.

Most notably, ‘Voicemail for Jill’ is a song that every woman needs to hear. This is a song about abortion. It is frank and honest, but most importantly it is empathetic and brimming with love. This song addresses the reality that comes with having an abortion, while once again offering a hand in the darkness to all women everywhere. While not directly written into the lyrics, this song is a sharp reminder that women are excluded, vilified, abused and imprisoned for making a choice – where many are not even given a choice in the first place – and we must endeavour to be pillars of support for every single one of them.

Further emotionally jarring tracks include ‘Bigger on the Inside’, a rapid-paced ukulele and vocal combination that builds up to a tumbling release, and ‘A Mother’s Confession’ that dives deeply into the fears and mistakes Amanda has faced since becoming a mother.

‘Death Thing’ is the last track on the album and the final twist of the emotional mangle. It is a mixture of tender solemn piano, sharp percussive elements and a sudden bursting wave of choral vocals. It is a true reflection of the shock, pain and anger that come hand in hand with grief. A song for many that would be extremely hard to hear. For others, in time, would resonate and heal.

The most gripping part of this work of art is the unapologetic from-the-gut expression throughout. In creating There Will Be No Intermission, Amanda Palmer has delved into the deepest darkest caverns of herself and her life, throwing them into sharp relief for the world to see. The album cover itself displays a full body naked shot of Amanda, brandishing a sword in front of a bleeding sunset. This album is not just about fear and pain, but also strength and empowerment. The image has been banned on Instagram and some areas of Twitter due to violating terms of service (read: naked breasts, what a shocker). Amanda has since been actively encouraging her followers to produce album cover fan art which conveniently circumvents these rules.

Overall, this is a heart wrenching, gut churning, life-affirming 78 minutes of art. It is not just another CD, Vinyl or mp3. that can be innocently put on in the background. It is a masterpiece of emotional truth telling that must be approached with nothing but love. Listen, cry, laugh, get angry and remind yourself how it is to be a human.