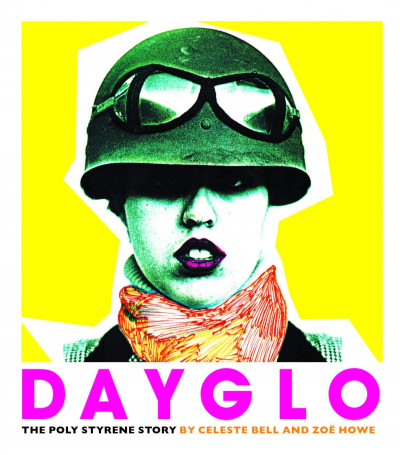 My mother was definitely searching for meaning in her life. She channelled this search into her artistic expression, where, through her writing, she was asking big questions about identity, society, materialism, sexuality.

Marianne Joan Elliot-Said was born in Bromley and grew up in Brixton, after leaving both school and home at 15, pre punk she identified with the hippy movement and led a precarious life orbiting music festivals. At this time she also recorded an album and released a ska/reggae single ‘Silly Billy’. All this changed in the summer of ‘76 when she saw an early Sex Pistols gig and was inspired to form a band, Poly Styrene was born!

X-Ray Spex, initially fronted by Poly Styrene and Lora Logic on sax, in many ways embodied all that was positive about first wave punk and contributed one of the few stand out tracks on the (as I remember it) very patchy ‘Live At The Roxy WC2’ album in 1977. Later the same year a studio version of that track ‘Oh Bondage Up Yours’ came out and is considered a touchstone among early punk releases. Paralleling Max Weber’s metaphor of industrial capitalism becoming an ‘iron cage’ for the working class ‘Oh Bondage Up Yours’ uses sexual metaphor to rail against subjection to capitalist consumerism, a theme that would reappear in Poly’s writing.

The album Germfree Adolescents came out in 1978 and evidenced Poly’s extraordinary insight and talent for exploring complex sociological concepts in accessible shorthand as she tackled consumerism, gender, the construction of self, gendered expectation under capitalism, genetic engineering, and performance.

After playing the 1978 Rock Against Racism gig in Victoria Park X-Ray Spex undertook a UK tour which left Poly exhausted, she subsequently left the band in 1979.

In 1980 she released the jazz tinged solo album Translucence before joining the Hare Krishna movement.

In the early 90s X-Ray Spex reformed for a one off gig and in ‘95 released Conscious Consumer.

In 2008 Poly dueted with John Robb on a remixing of a Goldblade track, appeared at a Love Music Hate Racism gig in London and then played a sell out gig with X-Ray Spex at the Roundhouse with a band that included her daughter the singer/writer Celeste Bell (who at one point Poly offered her X-Ray Spex role to). In 2010 Poly released ‘Black Christmas’, a song co-written with Celeste. The following year her final album Generation Indigo came out a month before she died.

Poly Styrene was a musician and lyricist of extraordinary talent, she is a punk and feminist icon and in many ways a reminder to us of how society could be. Roughly eight years on from her death, on March 28th, a book Dayglo; The Poly Styrene Story co written by her daughter Celeste and Zoe Howe comes out as part of the ‘Poly Styrene; I Am A Cliche’ project. Excited by the idea of a definitive book on Poly by one of the people who knew her best I contacted Celeste for an interview about the forthcoming book, she kindly agreed.


(((o))): How did the the idea for the Poly Styrene: I Am A Cliche project come about? Was it one of those ideas that wouldn’t go away?

The book project was first and the film came about as a continuation of what we wanted to do with the book.

(((o))): The project involves both the book Dayglo: The Poly Styrene Story, which is out in March, and a film to be released in 2020. Have you been surprised by the level of interest?

I was quite surprised although I always knew that my mother’s story resonated with many people for many different reasons and she always had a loyal and passionate fan base.

(((o))): Poly Styrene: I Am A Cliche was crowdfunded wasn’t it? How did that go? I imagine it could be quite nerve wracking!

It was really stressful! It was wonderful to see such a positive response from people supporting us but yes it is not something I would necessarily want to submit myself to again. The funds obtained from the campaign only partly financed the film as it has become a lot more expensive to finish than I had originally envisaged.

(((o))): The book is co-written with Zoe, how did you find each other, have you collaborated before?

I met Zoe circa 2008 and she interviewed me for a book she was writing at the time titled How’s Your Dad – Living in the Shadow of a Rock Star Parent? We kept in touch and I reached out to her about working with me on a book which primarily would be focused on my mother’s artwork. The book we have now developed from that; it is part art-book, zine, biography, memoir – a real mix.

(((o))): What was it like researching the book? Was it quite difficult finding primary sources as X-Ray Spex and Marianne’s early life were pre internet or was there plenty of material and the issues were more to do with editing?!

I feel that as I was so close to the story it wasn’t too challenging. I had grown up listening to my mother’s stories about her time in the music industry, it is a story which feels almost like my own.

(((o))): Was the researching and compiling a journey of discovery for you at all? Did you come across information and people you hadn’t previously been aware of?

There were definitely some surprises. It always is learning about someone you feel you know inside out from other people’s perspectives. I interviewed my father for example, who I have had a very rocky relationship with for many years and it was interesting to be in a space where I could hear his side of a story which had been presented to me in a very specific way as a child.

(((o))): Punk has often been hostile to religion but both Lora (Logic) and Poly joined the Hare Krishna Movement in the early 80s, did Poly have a sense of continuity between those two involvements or see them as distinct from each other? Was her seminal involvement in punk and her spirituality different expressions of the same search?

My mother was definitely searching for meaning in her life. She channelled this search into her artistic expression, where, through her writing, she was asking big questions about identity, society, materialism, sexuality. I think she didn’t necessarily find answers to those questions though and the experience of being in band with a lot of media attention left her more confused and mixed up than ever. Her retreat into the Hare Krishna movement was in many ways a complete break with everything that had come before, but was still driven by the same yearning for answers.

(((o))): In the book are you able to expand on the post X-Ray Spex Poly/Marianne, her involvements with the HKM and her continued recording and releasing of new music? Her last album, Generation Indigo, came out in 2011 didn’t it?

Yes, X Ray Spex was only a small part of her life, she retired from music at 21! I was born post  X Ray Spex, so it the Hare Krishna period and the struggles in our relationship as mother and daughter are themes we were very keen to explore in depth.

(((o))): While writing the book did you reach any conclusions about why Poly Styrene has continued to be a such a potent cultural figure?

I believe the answers she was seeking through her art are as relevant today as they ever were. I also believe that she was almost prophetic in her description of what the world would be like in the future – we are very much living in that world now.

(((o))): Poly Styrene seemed to personify all the positive aspects of punk, the malleability of gender, the irrelevance of heritage, the opportunity for participation, the ability to critique society and to think independently. Do you think that is why she continues to be important, because she reminds us of what could be?

(((o))): Germfree Adolescents has some of the most perceptive, sophisticated lyrics ever! It’s like a social science course in shorthand, dealing with issues of identity, gender construct, power, consumerism. Had she studied Sociology?

She left school at 15. However she was highly intelligent and highly sensitive to her surroundings. She also had an insatiable curiosity and was always reading and educating herself. She did take a course in Psychology post X – Ray Spex however.

It comes out at on the 28th of March. A day before Brexit! You can pre order from Waterstones already. There will also be a limited amount of special editions with all kinds of goodies available to buy in selected stores soon.

(((o))): Are there any book launches or book signings planned at all?

We have a book launch at Rough Trade East in London on the 28th of March.

Much thanks to Celeste for time and words and to Celeste and Zoe for researching and writing the book!

‘Oh Bondage Up Yours’ https://en.wikipedia.org/wiki/Oh_Bondage_Up_Yours!