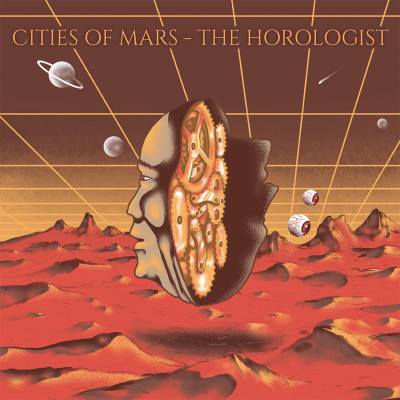 The Horologist by Cities of Mars

It isn’t often that I come across a band that capably merges sludgy, heavy progressive rock with intelligent sci-fi lyrics and well written, challenging song structures. But, today is a good day to Metal, because Cities of Mars last release, The Horologist, emphatically checked all of those boxes.

The Swedish trio hailing from Gothenburg, Sweden, formed in 2015. The band’s music is based on the story of a ‘Soviet Union landing a secret agent on the planet Mars. She discovers an ancient civilization and a conspiracy from the dawn of time.’ (The whole mythos is cleverly documented on their website.)

Cities have clearly put significant thought into the thematically rich nature of their music. This is apparent throughout their evocative, intelligent lyrics, written primarily by the band’s bassist Danne Palm. The lyrics depict sinister stellar locations in songs like ‘Trenches of Bah-belon’ and ‘Inner Sanctum Outer Space’ and the mystical in ‘Last Electric Dream’ whose lines read like stunning sci-fi poetry:

The music wrapped around the thought-provoking narrative is often equal to the task creating dense and vivid soundscapes. The band balances their many muscular, doomesque guitar riffs (by guitarist Christoffer Norén) with some less frantic, but equally as alluring, prog segments. The drums (by Johan Küchler – yes the umlaut is real!) are always crisp and attentive, propelling the band through its diverse, sometimes intricate tempos.

Cities does not try to besiege their listener with an unrelenting, sonic meteor shower of sound. Their melodies often build gradually, are torn down, revisited and often quite content to linger in an established and tight groove, regardless of its pace.

The band sound comfortable in their slow driving tracks like ‘Trenches of Bah-belon’ and the tranquil, dirge like ‘Work Song’, and aptly rise to the momentum of their more biting cuts, like the thunderous slow-burner that opens the album ‘Necronograph’. The trio show some impressive musicianship, eloquent compositional creativity and convincing songwriting throughout Horologist.

All three members of the band sing. The vocals, in spite of their passionate, earnestness often come across rather flat. They are pretty standard “angry metal guy, clean, anguished pseudo-shouts” which I can take or leave. My appreciation for this type of vocal delivery varies, its love or hate is in the ear of the beholder. Stylistically the vocal approach falls somewhere between the sanitized, calm and processed delivery of Monolord and the full throttle pained approach of Conan. There are a few moments where the vocalist really tries to push his voice throughout the album but I found the results are often uneven.

While some minor elements on the album misfire, the majority of it is pure quality and well worth a listen. Overall, The Horologist is time well spent on its well-conceived slow journey to Mars. Songs combine heavy riffs and colourful sci-fi soundscapes with engrossing lyrics and lavish sonic composition.

Book your tickets now for the next rocket visiting the Cities of Mars.