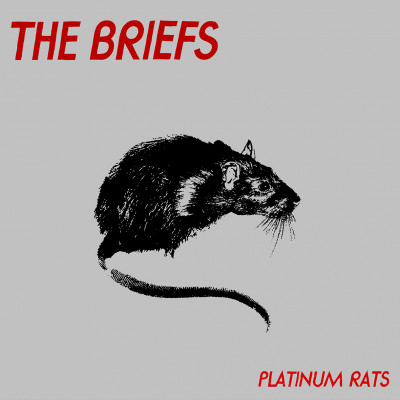 Platinum Rats by The Briefs

OK, I’ve never really experienced album review as journey before! But US punks The Briefs and their new release Platinum Rats managed to move me from initial response of ‘Heard it all before’ to ‘This is excellent’ in about three listens! I hadn’t heard of The Briefs before this album and we didn’t get off to a great start when I checked out their Facebook page and was confronted with a picture of a crucified figure’s feet-presumably Jesus’- with the accompanying text ‘We’ve nailed it’. Hostility towards organised religion in punk is about as old as, err, well, punk really but whatever you think of the person of Jesus (one of thousands of people who’ve experienced state torture and death through crucifiction historically and contemporarily) taking the piss out someone’s suffering in these days when cultural/political struggles over torture are still being fought seems, I don’t know, unwise? Maybe I’m overthinking…(and in all fairness it may have been a gig poster), but anyway it didn’t endear The Briefs to me initially.

One of the hallmarks of postmodernism is ‘an eclectic mixing of styles. These styles can be from different historical periods and cultures, manifest in architecture, fashion and the arts…’ (1) another related aspect is the self conscious homage, the plundering of the past and the cobbling together of pastiche, on a first listen these were the kind of thoughts that were going through my head as an album that seemed rooted in ‘77 came blasting out the speakers, it seemed in danger of being a reproduction of a mythical musical origins story, punk as time travel, The Adverts meet The Rezillos!

BUT, you know what, after a couple of more listens and a bit more internetting I realised that ‘Yes’ it is retro, ‘Yes’ it sounds initially like a pastiche of early punk/New Wave but The Briefs are completely aware of that and wear their influences and admirations proudly! On their website their bio comments ‘The Briefs take the stage like commandos of the New Wave, retro zombies from the Disco Inferno’! (2). They know who they are, they know what they do-and they do it very well indeed, these aren’t just punk retreads/recycled riffs, this is a lesson in the art/craft of New Wave/pop punk (and that’s not pejorative)!

Platinum Rats is 12 examples of great songwriting, musically fresh and exhilarating and lyrically intriguing, the whole album sounds like one beautifully crafted melodic punk gem after another!

As the tracks keep coming you catch half heard glimpses of a whole raft of New Wave bands, (and even a bit of Robert Calvert vocals in ‘Out of Touch’) but it never sounds tired or derivative. The only gripe I’ve got is the lack of a lyric sheet because The Briefs sound like under that playful, not taking things too seriously, image they have some important stuff to say, track 1 ‘Bad Vibration’ ends with a sampled voice proclaiming bizarrely ‘Revolution, overthrowing the government, free sex, free dope, y’know, free TV’, on track 3 ‘Nazi Disco’ they take a swipe at fascism and white supremacy but all I could make out really clearly was the last few lines ‘I don’t need your Nazi Disco, We don’t want your Nazi Disco’…and track 5 ‘GMO Mosquito’, well I guess the title points to what it’s about but I would like to be able to read more closely what they’re saying.

OK we got off to a bad start but despite my initial reservations The Briefs won me over through the sheer quality of their songwriting and musicianship-in short Platinum Rats is a great album!

Platinum Rats is out on April 12th on Damaged Goods Records and The Briefs are over in Europe this summer playing Germany, Belgium and the Netherlands, if you live anywhere near one of their gigs try and get there, judging by this album you’ll have a great night!