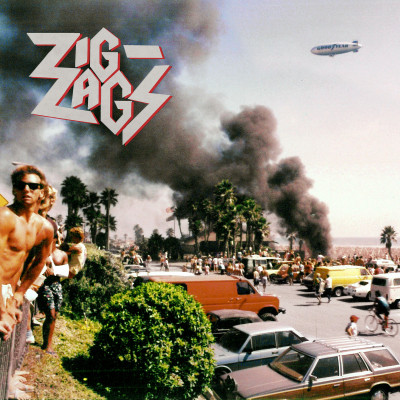 “Every album we record, every song we write – has to be faster, harder and heavier – than the one before”, so says the press release accompanying the fourth album from L.A.’s Zig-Zags. That quote could virtually be lifted from any band out of the pages of the eighties thrash metal mag Metal Forces. And that’s a little clue as to what the Zig-Zags deliver, a circle back to the time when NWOBHM and the very early stages of thrash intertwined.

No modern take on thrash here, nor is it a copycat of any particular-band, but They’ll Never take Us Alive successfully captures the pure rawness, energy, naivety of early eighties hard-core punk, Venom, Show No Mercy era Slayer, and especially Metallica, when they were that little ole’ thrash band. Also, tag in NWOBHM at its most-heaviest and most proto-thrashiest rawest, as in the company of Raven, and Savage.

This album spits and snarls, snapping away at relentless speed and adrenalin fuelled energy like teenagers taking bad, cheap drugs and alcohol. The Zig-Zags captures the sound of this time in metal history so well, I break out in acne every time I put the album on. And is there a better opening title, and indeed, a no-nonsense, thrashing mad, race you ‘till the end belter in ‘Punk Fucking Metal’ to set you on a rollicking collision course of a ride.

Lots of machine-gun-fire drumming excursions and quick-fire guitar soloing are spread throughout the duration of the album. ‘Killer of Killers’, is an ear to ear grinner for this mature, old-skool Metallica fan, as the Zigs-Zags nail everything that made thrash so exciting when the amps were first turned up for full volume impact and fast, frenetic wrist action was applied to playing the guitar. Then, I’m frothing at the mouth, neck brace at the ready as ‘Fallout’ is a head-bangers, mosh pit circling triumph. Fans of Kill ‘Em All should check the afore-mentioned tracks out, immediately!

But, the Zig-Zags also burst out with simmering punk energy as the album progresses. The title track is a short ‘n’ snappy, Ramones-esque punky banger, including the New York legends trademark 1,2,3,4 for good measure. The instrumental ‘Nothing To Do’ strangely recalls the Buzzcocks experimental excursions in the manner of their ‘Late for the Train’. While, to prove the Zig-Zags are not just about all things retro, the closer ‘Godsized is a sludgy monster.

Will this album appeal to those who are younger and born far too late to not have an inkling what the heavy underground scene was like in the early, mid-eighties? I’m not the best person to answer that, but, on the other hand, why the hell not? If you want some new, raw punk fucking metal, this is a great place to give it a go.

I shall leave you with how the now sadly defunct, but legendary heavy metal record shop Shades, used short, humorous, snappy slogans to review anticipated releases in their advert sections in the back pages of Kerrang! might have responded on hearing They’ll Never Take Us Alive – “Delete Metallica, Zig-Zags Kill”.