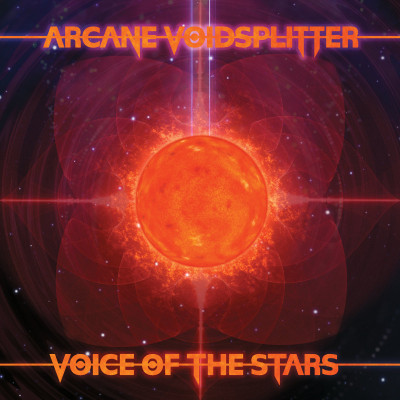 Voice Of The Stars by Arcane Voidsplitter

Voice Of The Stars has one of those album titles that sits halfway between early ‘70s prog/Kraut beardstroking and the sort of ‘expanded consciousness’-oriented psychonautics that we all so love, but for Belgian man-of-a-thousand-bands Stijn van Cauter there’s a literal streak to the sentiment that makes for truly out-of-this-world (sorry) listening. In the second full-length under his Arcane Voidsplitter guise, he takes the listener on three awe-inspiring sonic voyages, each corresponding to a celestial body (these being Arcturus, Betelgeuse and Aldebaran). As such, it’s an album that is full of majesty, an endlessly undulating soundscape of synths and funeral doom where not much of anything happens. That is precisely why it works.

Take ‘Arcturus’, for example. As a star, it is one of the most prominent bodies we can see from earth. Almost twice as old as Earth itself, it is believed to be in its death throes but it’s not in any hurry to get there. As such, Stijn’s composition is similarly lethargic but its gradual unfurling of drone exudes that same incessant warmth, seemingly content to drift in its vast nothingness for an eternity and a half. ‘Betelgeuse’, meanwhile, makes up for its relative youth by dwarfing little old Arcturus in size, so it makes sense that its musical accompaniment is likewise truly colossal, a 35-minute wonder of ambient subsound frequencies with a gravity to match its namesake. It’s music for documentaries and meditation, something to envelop the listener as they ponder the vastness of space, its unfamothable mystery and our insignificance within it (or something to that effect.) Even by drone and doom standards, it feels truly monolithic though Stijn never feels the need to push the volume to seismic levels or to add the odd ‘spacey’ flourish in there for show. It just exists to sink into.

Finally, there is ‘Aldebaran’. Neither the biggest nor the brightest in the sky, it glows brightly enough for us to take notice nonetheless, making its slow-burnout finale a fitting comedown. Here, it is both comforting and strangely heartbreaking, the audio accompaniment to watching the life seep from a trusty pet after a long and faithful life. As with the rest of this album there is little in the way of movement, just a deep swelling and subsidence of organ and distortion-saturated guitar that spins on and on without obstruction. And so, we come back full circle to the beginning. What has happened? Nothing – this album merely accompanies you as you float like a cosmic derelict, the celestial bodies singing to you softly in fellowship as you likewise meander through the cosmos. Given that physical interstellar travel isn’t likely to be on the cards for anyone on earth any time soon, this is a more than welcome substitute.