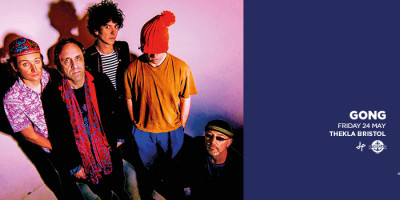 It’s apt that this evening’s Bristol date of their UK tour brings Gong and Ed Wynne to Thekla, a former cargo ship moored in the Mud Dock area of Bristol’s Floating Harbour. Both artists are riding on the crest of a wave, having recently released celebrated new albums on Kscope. That the boat was brought to Bristol by Ki Longfellow-Stanshall, the wife of Vivian Stanshall, only adds to the suitability. Longfellow-Stanshall moved her family into the living quarters, retitled the ship the Old Profanity Showboat, and set about showcasing a range of theatre and music.

There’s a feeling of homecoming this evening: Wynne relocated from Somerset to Colorado not so many years ago, whilst Gong have had strong ties to the West Country long before Kavus Torabi, born in Plymouth, joined the tribe. It helps that the venue opens long before a note is played; old acquaintances are renewed, and conversation flows freely. Gong’s founder, Daevid Allen, had a vision of the band as an extended family, and tonight the great and the good from some of the fine psychedelic bands associated with the musicians performing mingle with other space rock aficionados.

Thekla’s kudos is a little dampened when Ed Wynne steps up for his excellent opening set. The sound is muffled, especially towards the back of the tightly packed throng. This combination of little space and poor audio makes it hard to completely lose oneself in the delightful, dubby, progressive layers of sound coming from the stage. Having said that, it’s a fine turn and should shift copies of a beautiful solo LP, which provides the basis for tonight’s short performance.

Initially accompanied by pastoral imagery well suited to Wynne’s “shimerscapes”, it’s not long before both visuals and sound turn towards a full-on flight into psychedelia one might expect from Wynne’s regular gig in Ozric Tentacles. With son Silas Neptune present on synths, alongside funky bass guitar and dynamic live rhythms from Zazza Drums, the line-up isn’t a million miles from Ozrics, either, although this set-up does focus more on Wynne’s fluid and distinctive guitar technique than his day job allows.

Gong waste no time setting out their stall, launching straight into ‘Can’t Kill Me’, from 1971’s Camembert Electrique. The powerful riffs, and call-and-response vocal that open the piece, almost immediately give way to an improvised section, demonstrating the near-telepathic understanding between the players that allows them to move into poly-rhythmic, discordant turf without so much as a warm-up. The track contains everything that’s great about Gong in bite-size form: the staccato riffs, thoughtful, provocative lyrics and time-signature hopping, genre-defying blend of jazz, rock and funk are all present and correct.

Something isn’t right, though: whilst the front-of-house sound is markedly improved between bands, the onstage monitoring is making all sorts of distracting pops and hisses. These are clearly audible throughout the room, and it’s no surprise the five-piece are affected given what makes Gong special is the way musicians listen to each other and the interplay between them. Torabi, front and centre, is perhaps the most visibly shaken by the sound issues, but it’s to the band’s immense credit that they remain professional and give their best. Gong are firing on so many cylinders at present that nothing as mundane as poor sound is going to stop them creating something transcendental.

Kavus Torabi is a natural, charismatic front-person, and his angular guitar riffs, particularly on newer compositions, add a unique flavour to the sonic stew. His vocals are an acquired taste, but he’s adequately supported in this department by guitarist and Violeta de Outono founder Fabio Golfetti, and frenetic mystery drummer Cheb Nettles (haven’t we seen him somewhere before?!) Dave Sturt’s fretless bass underpins everything and at times adds rich harmonics. Golfetti’s glissando guitar also fills the frequency range, the Brazilian proving to be an adept soloist, adding blistering fretwork as required.

‘If Never I’m and Ever You’ follows ‘Can’t Kill Me’, one of three tracks taken from the new 4-track album. ‘My Sawtooth Wake’ provides another taste of the new medicine, but the evening’s “Hoffman” dose comes in the form of ‘Forever Reoccurring’, the 20-minute opening track from The Universe Also Collapses. Complex, introspective and featuring 30-beat cycles throughout, it holds the attention of the rapt crowd, aware of the alchemy taking place before them as musical raw materials are fused to create something far from the sum of their parts. It says something about the new album that ‘The Elemental’, a track as close to a single as can be imagined in the Gong solar system, is omitted from the set-list!

Perhaps the most notable individual contribution comes from Ian East. A decade into East’s tenure with Gong, it’s safe to say his sax sound cuts through and is as relevant to the 2019 incarnation of the ensemble as Didier Malherbe’s tones were back in the 70s. ‘Kapital’, the punkiest offering in this evening’s arsenal, sees him shine. Like all the performers present tonight, he has more than one mode; hearing him add cheeky, melodic refrains one moment, and freewheeling jazz squawks the next, is a joy.

The set also includes ‘Rejoice!’ but ‘Master Builder’ forms the centrepiece of the evening’s performance. It’s often said that one of the defining features of any Gong line-up is their ability to tackle the track, aka the ‘Glorious Om riff’. Given this evening’s technical limitations, perhaps it’s no surprise that this isn’t the best version of the tune this author has seen the far-out five play. That said, no less an authority than Steve Hillage rates this line-up’s turbo-charged take on the piece as the definitive version, so it’s far from shabby; a celebratory ritual that’s met by perhaps the loudest cheers of the evening.

A welcome rendition of ‘Tropical Fish / Selene’ rounds out a great night of mystical music. Long standing fans of Ozric Tentacles speak about Pungent Effulgent in hushed tones, whilst Gong acolytes are prone to wax lyrical about the Radio Gnome Invisible trilogy, with live performances by both groups from these eras revered by those fortunate enough to have been there. Whilst the uninitiated would do well to acquaint themselves with these classic albums, it’s worth noting that both Ed Wynne and Gong’s latest efforts match up to these lauded landmarks, both live and on record. Familiarise yourself with both artists at the earliest opportunity.