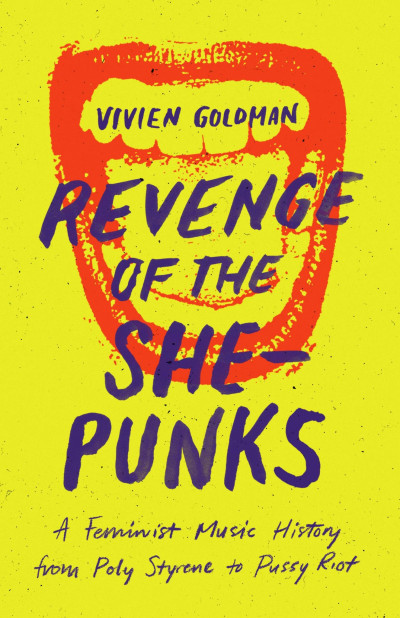 Revenge of the She-Punks; A Feminist Music History from Poly Styrene to Pussy Riot. by Vivien Goldman

Vivien Goldman has certainly packed alot into her life so far! Musician (she was in The Flying Lizards and has an album coming out later this year), journalist, an adjunct professor of music, author of five, no make that six, books, talking head on TV and radio and I’m pretty sure, when I was at an exhibition in Brixton recently, I heard her in a trailer for an upcoming documentary I Am a Cliche about Poly Styrene! Her recently published book Revenge of the She-Punks: A Feminist Music History from Poly Styrene to Pussy Riot is as energetic and full of life as I imagine the author must be!

Revenge of the She-Punks races along; entertaining, invigorating, informative and, if I’m honest, at times a little frustrating, it is a book on a mission! It’s stated aim is to present ‘A Feminist Music History from Poly Styrene to Pussy Riot’ and it pulls it off. Structuring the book thematically around identity, money, love/unlove and protest enables Goldman to join the dots up between a multiplicity of artists across time and space, seeing the similarities in struggles for equality, community, safety and freedom at various times and in various places.

The book starts off each chapter with a playlist along the theme of that section, first up being ‘Girly Identity’, songs listed include ‘Identity’ by X-Ray Spex and Big Joanie’s ‘Dream Number 9’. Dominating the first few pages of the chapter proper is the insightful, inspiring Poly Styrene of course. At a recent exhibition of art(efacts) around Poly an introductory text included “she questioned her own identity, how the world saw her, how she saw herself and the ways in which identity labels would affect personal freedom and self expression” (1), this book explores some of those questions in and through the life of Poly Styrene. Next up is Debbie Harry, before a section on The Raincoats including the intriguing comment “…the Raincoats were so good at answering that primal question ‘What might women’s music sound like, if it were different from the bloke’s?’”, fast forward to Riot Grrrl and Bikini Kill in particular. Lizzy Mercier Descloux, Tamar-kali and Big Joanie are up next tackling issues of race, gender and class. Delta 5, Bush Tetras, Fea, the book never takes a breath as it charges on! But I had to, and when I did I wondered ‘Was the quote above essentialist? Does music created by women come from a different place from music made by men? Probably, due to different social experiences, so how would class/ethnicity impact on that? If we understand and express ourselves through the cultural resources available to us, what would the biggest influences on music be…?’

Next section up is entitled ‘Money’ with a playlist ranging from 1975’s ‘Free Money’ by Patti Smith to Pussy Riot’s ‘Kropotkin Vodka’ (2012). The chapter starts with Goldman shopping with Patti Smith who has come into some money due to the success of Horses and treats her friend to a new jacket. Goldman laces the book with anecdotes and her own conversations with some of the musicians who feature, but this never comes across as name dropping or egotistical as their inclusion always serves the purpose of the book. The chapter continues like the first, on a whirlwind tour of female musicians and their relationship to money and material life more generally. German band Malaria!, ESG from USA, Shonen Knife from Japan, then over to the UK for The Slits and then fast forward in time to Pussy Riot and then the UK again for Maid of Ace.

Revenge of the She-Punks’ third section is titled ‘Love/Unlove’ and of all the chapters is possibly the least well defined as it ranges over questionings of bourgeois constructs of romantic love, sex and sexuality. The chapter also touches on sexual violence and this is where it could possibly have done with a little more thought, after including a controversial comment from Chrissie Hynde’s autobiography a page or so later Goldman writes “The whole Riot Grrrl movement began because of a home invasion and the rape of Kathleen Hanna’s roommate. With men ever less sure of their place in society, violence against women only increases…” (p.104), an (in the book) unsupported and odd comment especially as forty pages later, when writing about a Kashmiri band, Pragaash who had a fatwa issued against them, she writes “Indeed the Mufti thundered about ‘westernization’ and accused Pragaash of being part of a process of liberalization, which he claimed had led to the sharp rise in abuses ranging from mass rapes to acid thrown in women’s faces to the trafficking of child brides in the mountains of Pakistan. The Guardian reported, ‘(The Mufti’s accusations) outraged many who believed…sexual violence is the result of deep rooted cultural misogyny” (p.145). I am still struggling to see clear water between Goldman’s comment and the Mufti’s, both seem to be claiming that cultural and societal changes (that impact on relationships between sexes) have led to an increase in sexual violence, although she clearly views the Cleric’s views negatively. Maybe I’m misunderstanding her. The chapter features sections on Crass, Indonesian band The Dissidents, Alice Bag and Grace Jones. Plus a playlist including Tribe 8, The Au Pairs and Neneh Cherry.

Chapter 4 ’Protest’ is, for me, the most important section of the whole book. Starting off with Pragaash and Vinyl Records the chapter highlights the struggles of female musicians in oppressive patriarchal societies. ‘Punk is still on the barricades’ Goldman writes, using Indonesia and Russia to illustrate that “… authoritarian regimes understand that punk’s quintessential raw primitivism is a threat to their control” (p.148). She goes on to write about Sleater-Kinney, Czech band Zuby Nehty and Spanish punks Las Vulpes. Also included are Pauline Black and the Selector, Jayne Cortez and a section on the intriguing, wonderful Vi Subversa and the Poison Girls. The chapter ends with a final piece of global time travel as the book moves between seventies Nigeria (Sandra Izsadore), contemporary London’s Skinny Girl Diet and Columbian band Fertil Miseria.

Revenge of the She-Punks pulls off its stated remit of educating the reader about the rich and diverse history of feminist and female musicians from Poly Styrene (and Lora Logic) of X-Ray Spex to contemporary bands like Skinny Girl Diet. Vivien Goldman’s encyclopedic knowledge of punk and global music plus (I imagine) a lot of research and hard work has produced an exciting, inspiring and thought provoking book that should be an important weapon in women’s ongoing battle for equality, space and freedom.