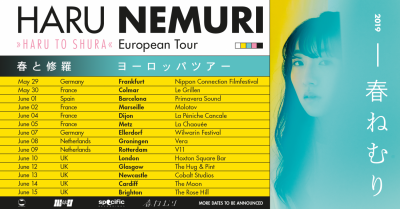 When Haru Nemuri released Haru To Shura in 2018 she couldn’t have known just how much of a breakthrough release it would be. With eclectic experimental electronics, Japanese rapped or spoken, and performed with a punk rock vibe – it’s an unlikely ambassador for the rich and fertile alternative scene that has thrived in Japan for decades. But it’s an album that has demanded to be heard and, with an invitation to Spain by Primavera, a packed Hoxton Square Bar & Kitchen was visibly pulsing. It would have been a lot to live up to the energy surrounding the album, and waiting between Haru Nemuri and her debut London show was Icelandic electronic mad genius dj. flugvél og geimskip – who was in the unenviable position of keeping up the hype.

If you were to look at the stage you wouldn’t be remiss for thinking that someone had emptied your 90s bedroom onto the platform with fairy lights, fibre optics, and enough room around two keyboards to make a lava lamp conspicuous by its absence. It’s a fitting backdrop for Steinunn Eldflaug Harðardóttir, the lone member of geimskip, whose performance is akin to watching the Magic Roundabout through a Gameboy screen – blips and childish glee left heartily intact.

Steinunn’s music propels itself off a psychedelic cliff with an off-kilter charm, but her music itself mixes a grounded dedication to the beat with a lucid cosmic exploration of alien sounds – all transcribed by her melodic vocals and excited chirps. Its a happy medium between the art house and the club: Salvador Dali curating the school disco. She weaves narrative storytelling, which is by turns funny and lucidly strange, to allow her set to flow in a curious journey through one person’s kaleidoscopic imagination. Watch in awe, as she takes you by the ear to hear “the oldest song in the world”, before tugging you away because a strange creature has entered the venue. . . and it of course has its own soundtrack. It’s a fun time all round, and with her eccentric style and stage talk you’d be forgiven thinking that she was entirely in the house of novelty; but underneath all the strangeness is a lively and provocatively avant-garde song craft that doesn’t just invite people to smile, but rather positively enforces it.

With a spirited support, Haru Nemuri arrived on stage armed with a lone DJ to an electrified crowd. To see Haru Nemuri is to see someone transform to the beat, becoming an effortless sonic wave machine connected to the source. Every word bursts with emotional pathos, and live you start to see the roots she shares with her friend and musical maverick Mariko Goto. Her prose takes an almost clinical detached tone before exploding into guttural screams that strain every syllable into a grotesque cadence. She jolts and sways on stage, dancing as if in a state of mania – crowd-surfing like an electron travelling on a current.

So fevered were the audience during no-nonsense anthem ‘Take Back The World’ that a pre-rehearsed gag of stopping and starting the song three times seemed misjudged considering the fan fervour. Haru declared, “This is the easiest song in the world. All you have to do is say ‘Ai Ai Ai’!”; but she was schooling a crowd already shouting every lyric back at her as if holding doctorates in the album. It’s often a huge obstacle for artists to overcome the atmosphere of singing over digitised tracks, coming across as an over ambitious karaoke session. But Haru Nemuri draws from the wax of classic hip-hop, spitting emotion, and hazy dreams to a warm turntable in a similar way to dälek or Melt-Banana. This is pop music for the weird generation; Britney Spears for the vaporwave crowd.

The most figurehead moment of the night came within title track ‘Haru To Shura’. After a dizzying, boisterous, and cathartic victory-lap of a set, Haru Nemuri reached the midway climax in the titular song which includes a small spoken-word interlude cradled in silence. Amongst a packed room of mostly, I presume, people illiterate in Japanese, there was complete silence – not a single word, clap, nor cheer to break the hush. It was a silence not out of awkwardness; it wasn’t even a silence of respect; It was a silence of complete reverie. Haru Nemuri is an artist who derives large swathes of her power from the meaning of her poetry in her native tongue, and she managed to perform the jaw-dropping feat of transcending that language barrier to transfix an audience with woven silence and words. After a brief pause, she starting breathing heavily, as if asphyxiating, before screaming over and over again and collapsing into the crowd, in an act which saw theatre and underground collide.

Before a litany of encore songs trying to make use of the overcharged power left in the room, she closed her main set with her new song ‘Riot’. Its another exceptional, anthemic electrode in her ever growing stack of capacitors. It’s just another hint of the lightbulb-bright future that Nemuri has in front of her, with a live show with a heart that off-beats in static and pops with lightning. We will be seeing much more of Haru Nemuri over on these shores, her performances over Europe have all but guaranteed that, and she is certain to continue her prolific pace. Upon watching her live shows you start to wonder that if she doesn’t, she might explode.