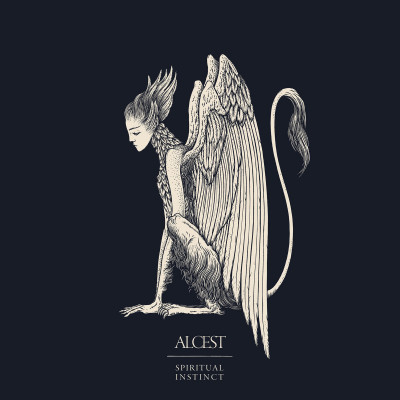 The symbiotic relationship between art and catharsis is never more prominent than it is in the world of music. Music is the most immediately emotive artistic medium, acting as a tool to exorcise one’s demons just as much as it exercises the mind. So, it is with Spiritual Instinct, the latest offering from France’s premier ‘blackgaze’ outfit, Alcest.

There’s no getting away from how much darker an album this is when compared to its predecessors. The gorgeous, almost crystalline guitar tones that suffused everything from Écailles de Lune onwards are so diminished as to be non-existent. That’s not to say that this is an entirely black metal album: Neige’s keen ear for a good melody still rings true. It’s just that they’ve been given a raw, distorted edge for this album. As a whole, this makes the album into a natural musical successor to Kodama, and an intriguing evolution of the Alcest sound fans have come to know and love.

That being said, this is undoubtedly a dark album. Opener Les Jardins de Minuit (‘The Gardens of Midnight’) starts with a menacing bass, over which Neige’s guitar screeches like an owl on the hunt. Winterhalter’s furious drums burst in, and we’re off. Anything like Shelter this album certainly is not. The melody created by that raw-edged guitar tone is in itself an exorcism of feelings, as if the music itself is pulling out all the spiritual angst Neige has injected into the lyrics and displaying it for the world to hear.

It’s worth pointing out here that Neige has always had an excellent ear for dynamic range, and for when to build up and strip back the instrumental layers. On the opening track of Kodama, there’s a fantastic solo that demonstrates this neatly, slowly building guitar loops on top of each other into a gorgeous crescendo. Although there isn’t quite so much room for such a solo on Spiritual Instinct, that build of layers and the contrast of dynamics is still present. Take ‘Le Miroir’, for example. It opens with a snarling guitar and hefty drums which build and build and then die back to allow that famous, beautiful, crystalline guitar tone to come to the fore. The quiet start and slow crescendo of the repeated motif then underpins the analogue synth line, and the whole effect feels as shimmering and shining as a mirror’s surface. When the choral backing kicks in, I can honestly say it gives me chills.

The whole album feels like this: the fluid dynamic range and contrast of gorgeous clear melodic motifs with jagged, urgent riffs, hefty basslines, and thunderous drums all combining with those icy howls and plaintive clean vocals to literally give voice to the spiritual angst Neige is exorcising on this album. Whatever demons Neige has been wrestling with, they’ve surely taken quite a beating. But in composing like this, Neige gives his music a depth and vitality that a lot of metal lacks. So much metal is just focussed on being loud that it becomes a barrage of noise. Neige, and his contemporaries in bands like Sólstafir, understands the importance of dynamic range, which is what raises his music to the superlative level at which it sits.

Beyond an exploration of its component parts, ‘Le Miroir’ is best treated a distillation of the album as a whole. It’s a setting of Charles van Lerberghe’s poem of the same name to the kind of gorgeous music only Alcest can create. The words of the poem translate, roughly, to show a narrator who sees himself as an “image in the shadows”, a person whose soul is “dark, like the rivers of Erebus”. In Greek mythology, Erebus is one of the primordial deities, acting as a personification of darkness and shadows. He is the brother of Tartarus, god of the underworld. The lyrics go on to show the narrator saying “I reflect the azure sky and the light, everything that passes, everything that changes”.

This poem, then, is arguably a summation of Neige’s spiritual journey. In an interview I recently had with him, he stated: “When you are following a spiritual path like I’ve been doing pretty much since forever, if you want to be a better person and try to improve yourself and grow as a soul and human being, you need to face your demons first”. Positioning Neige as the narrator of Le Miroir, the soul as dark as the rivers of Erebus he talks about is his own. But he is also reflecting the beauty of the azure sky. Ultimately, Neige is perhaps wrestling with a rather personal duality: having a dark soul but wanting to embrace rather than reflect the blue sky.

Quite where that dark soul comes from, we may never know. Some will be quick to point to his involvement with Peste Noire as a source. They may well be right. He clearly regrets his time in the band, as evidenced in his recent interview with Metal Hammer UK, in which he states “It was completely my mistake. I was too young to realise how bad it was to play in a band like this”. This corroborates a 2011 interview he did with musikreviews.de in which he stated “I never was involved in any way with any political, racist or xenophobic ideologies”. That he has liberated Winterhalter, and live band member Indria Saray, from Peste Noire, and taken pains to stress that Alcest has nothing to do with the toxic ideologies of that band, would give credence to the notion that at least one of the spiritual demons being exorcised on Spiritual Instinct is that of this awkward musical history. In the world of metal, the number of musicians whose politics or personal morals are unpleasant is seemingly and uncomfortably ever-increasing, so it is quite a relief to have Alcest’s position against such things so vehemently reaffirmed.

Putting politics aside, Spiritual Instinct is just as strong and just as beautiful an album as fans could have hoped for as a follow-up to Kodama. The darkness at the heart of the album does not overshadow the incredible melodies and sheer beauty on display. Not only is it a serious contender for Album of the Year (it’s certainly my top pick), it also cements Alcest as one of the most vital and interesting bands in the world of metal today.