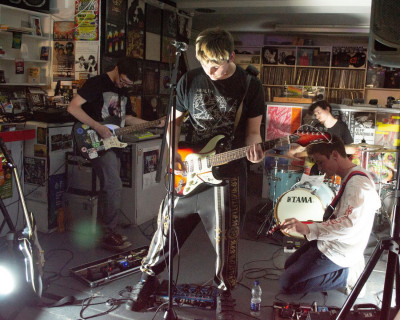 Burden Limbs released their downward spiralling, bends inducing EP There Is No Escape – an effluvial miasmic EP which careers from crushing excess to rippling melody. To usher in its arrival, Burden Limbs took to Shoreditch’s Flashback Records to perform amongst a library of cassettes and vinyl in a small but tightly packed room.

Their sound echoes back to the proto-post metal and crust punk sound of bands like Amebix, mixed with a healthy dose of more polished walls of noise produced by Russian Circles. They ostensibly write punk rock songs, with the same dedication to direct song structures  – but with looping post-metal dragged across it. On stage, this manifests itself in a live show not unlike Russian Circles, with the talking done with repeated waves of noise that crush whilst vocalist Chad Murray goes off the deep end. There’s a far more organic feel then that of Russian Circles though, with blunt guitars and drums bringing the post-metal sound down to the earth’s crust with messier and more lively production.

Chad Murray meanwhile, leads with an unconventional singing style that places him in a bizarre union between Skinny Puppy’s Ogre and Moby Dick’s Ishmael. His careening prose reads like an old Mariner’s song told by a sailor long since emptied by the sights of the eldritch depths. Its somewhat unfortunate then that some sound issues, especially during the first song, led to moments that often lacked definition – with the more intricate moments on the EP being overwhelmed by the crunch in the sounds. This carried forward for the vocals too, with lyrics moving in and out of clarity seemingly at inopportune intervals. Fortunately, a few technical mishaps weren’t enough to ruin the smothering atmosphere – with most inconsistencies being squashed by the sheer size of the sound.

Performing to a small crowd of friends and passers-by, there was a collective feeling of camaraderie by the end of the last droning note. It’s this DIY, unpolished grit that makes Burden Limbs an exciting prospect going forward – scraping away all the gleam and cleanliness of contemporary post-metal acts to return to those crust-laden roots from where the genre was born. If they can find the right balance between clarity and grime, they could end up having something rather special indeed.