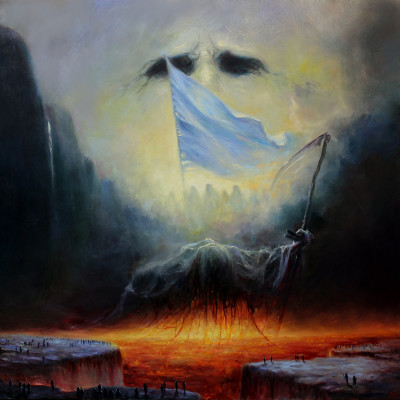 A dense, complex and accomplished black metal record, with the three long tracks (together with a small ambient outro). At first listen it might even seem too opaque, an album led more by furiously complicated drumming and the building of intricately numerous sections. With each listen, though, the album grows into a subtle (yet still wildly aggressive) balance of murky complexity and tightly controlled exuberant epicness.

The number of musicians I think contributes to this: in more spaciously atmospheric black metal there might be grand slow zones where harmonics, tone and repetition provide the excitement; here it’s about an almost claustrophobically energetic sound. It means the bursts of twiddles and rips make the most of their tightly packed spaces, and the overall effect is that no quarter-second is wasted when some seriously densely organised noise could be forced into it.

Vocals are varied and great throughout, within a spectrum of extreme metal styles (no post-hardcore whoaaas or screamo-ing), but the first entry is AMAZING, a goblinwitch bark that just feels so rough and otherworldly, like a properly frightening supernatural creature bursting out of the darkness. It’s a key moment when you’re first listening to the album as well, where the first riffs could move into a more monotone post-metal area. But the voice leaps in to shock you into another dimension, and the riffs change, leaving you to face up to the fact that this album does not offer clear signposts or easy paths. Instead, like a tough hike through sharp rocks, it can be gruelling but that’s exactly what’s necessary in making it exhilarating.