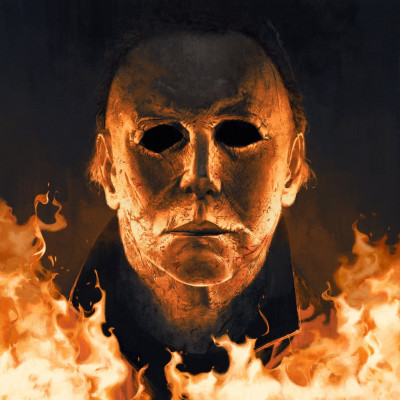 John Carpenter is that rarity among filmmakers, a director who also does his own scores. Perhaps his best known and best loved score was for Halloween (1978), a surprise hit that catapulted a then unknown Jamie Lee Curtis to stardom. For David Gordon Green’s 2018 sequel, he teamed up with his son Cody Carpenter and godson Daniel Davies to record his first film score since that which he composed for his lacklustre 2001 effort Ghosts of Mars. That score is now being released in an expanded edition, featuring a whopping 45 musical cues as opposed to the original soundtrack album’s 21.

The album begins with a couple of tender and other-worldly sounding tracks (the latter of which ends with some pre-credits tension-ratcheting bars) before the trio’s new iteration of the classic ‘Halloween Theme’ kicks in. The addition of multiple tracks of synths to this version makes it sound fuller and more vivid than the original, which due to movie’s low budget, was necessarily quite raw, stripped down, and basic sounding. The spacey tone of the first couple of tracks returns on cues heralding flashback scenes providing revelations about heroine Laurie Strode (Jamie Lee Curtis)’s past and scenes of Strode experiencing an emotional breakdown.

Messrs Carpenter and Davies opt for some aggressive electronica to go over an early scene in which the film’s antagonist Michael Myers (James Jude Courtney) murders someone. This tone continues with added guitar in the unimaginatively titled ‘Michael Kills Again’. With the latter track, the trio really manage to convey what (I can thankfully only imagine) it must feel like to be pursued by an axe-wielding murderer, as does later cue ‘The Shape Kills’. They capture the sadness of the victim’s early death well on ‘Gas Station Aftermath’.

Two consecutive tracks that serve as perfect demonstrations of Carpenter, Carpenter, and Davies’ dual talents for conveying characters’ fears that Myers might be coming to get them and abject terror at the fact that he is coming to get them and is now mere yards away are ‘Hawkins Called to Babysitter’s House’ and ‘Laurie Sees the Shape’. Their synth sound then goes almost Jean-Michel Jarre-like on ‘Looking for Allyson’. This tendency continues on ‘The Shape Hunts Allyson’ but is bolstered on the latter cue by some dirty sounding electric guitar that recalls Mike Patton’s Fantomas supergroup. Piano is used very effectively to reflect the sadness of Allyson’s corpse being discovered a couple of tracks later.

‘Say Something’ features possibly the tensest sounding use of synths on the entire album, but the suspense is undercut slightly by some melancholic sounding synthesised strings. ‘Ray’s Goodbye’ is a very effective re-recording of a cue from the original movie that generally meant a babysitter or their boyfriend was about to be murdered by Myers. The last five cues soundtrack Strode’s luring of Myers to a house and trapping him in the basement where he (possibly) burns to death. The synths are at their most 1980s-sounding on ‘Trap the Shape’, which is no bad thing, and their interplay with the piano on this track is particularly effective. The main Halloween theme returns and is played cathartically on ‘The Thing Burns’, as it does on ‘Halloween Triumphant’, wherein it is used to signal to the audience that it’s time to head home.

This album features an established maestro of movie scores making a triumphant return to one of the art forms in which he established himself. John Carpenter manages to expand the original Halloween score, taking several of the musical cues from it and reworking them to feature additional instrumentation. His son (with whom he has previously performed most of his classic scores live) and godson’s contributions prove invaluable in this respect, for these recordings sound like three people having fun in a room together creating cinematic noise, rather than one guy sat at a synthesiser, as was the case with the original Halloween score. At 45 tracks, the album gives a much fuller impression of the film’s score than the original album did. Fans of David Gordon Green’s film and/or its score would be well advised to seek this out (although owners of the previous soundtrack release may well be heartily cheesed off at the decision to issue a full version of it just one year later).