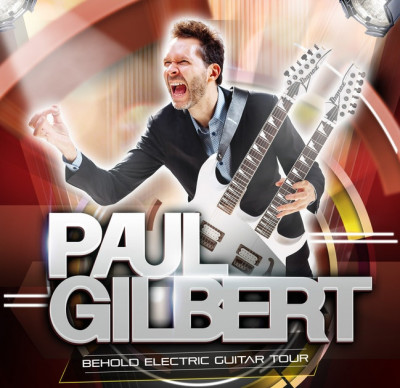 Rising to fame in the late 80’s originally with Racer X and subsequently with Mr. Big, Paul Gilbert is now been considered one of the rock and metal world’s most prestigious guitarists, and is able to stand shoulder to shoulder with the great shredders who characterised that era. Since then, Gilbert has had an incredibly varied career forming and reforming both aforementioned bands, performing as part of Joe Satriani’s G3 project and embarking on a solo career which has produced fifteen studio albums to date. Touring off the back of his latest record, the superb Behold Electric Guitar, Gilbert came to the intimate venue of the Islington Academy, which even on a Sunday night was fully packed out to see him (something other solo guitarists may well struggle to achieve).

Support for the evening was provided by newcomer Beau Bowen, who raised a few eyebrows throughout the already full venue with his elaborate dress style, but it didn’t take him long to put the audience’s mind at ease. He was a man of few words, mostly letting his accomplished guitar playing do the talking which, needless to say, was the perfect way to win over a Paul Gilbert crowd. Everything about Beau Bowen and his backing band smacked of 70’s nostalgia, which is no bad thing when you can pull it off like he was able to. While his vocal work was not at the same level as his guitar playing, the bluesy style of Bowen’s voice provided a nice accompaniment to the long musical interludes, and made for a perfectly good start to the evening.

Looking like he was on his way home from work, Paul Gilbert nonchalantly wandered onto the stage. half-an-hour later, catching most of the audience by surprise. Complete with a backing band consisting of keyboardist Asher Fulero, bassist Roland Guerin and drummer Bill Ray, the virtuoso wasted no time at all in launching into ‘Blues for Rabbit’ and ‘Havin’ It’, both of which are drawn from his acclaimed new album. One of the elements Behold Electric Guitar was most praised for when it was released back in May was its innovative blending of various genres, and this becomes immediately apparent in a live setting too. Despite being best known best for his rock and metal shredding (which is, unsurprisingly, still very much a constant theme throughout the show), there are copious elements of blues, funk and jazz thrown in too, as Gilbert mainly resists the temptation to play to his classic audience.

There are some cases where he does play to the crowd however, throwing in a cover of the Mr. Big classic ‘Green-Tinted Sixties Mind’, as well as a cover of the Rocky theme, of all things. Although he has incorporated vocals into his work before, Gilbert relies solely on his guitar work for this performance, playing the melodies that the vocals would usually do. Thankfully, when you’re in the hands of a professional like Gilbert, this is not a problem as he is able to produce an amazing tone and truly make his instrument sing. He does however still make some use of the microphone in front of him to tell some stories, detail his song-writing process, and read out the spoken-word part of ‘A Herd of Turtles’ in the voice of Ringo Starr (obviously).

Long-standing fans of Gilbert may have been a little disappointed at the lack of material from his back catalogue, while shorter-term followers could well have felt a little let down that there were not more references to his other projects. He chose instead to focus exclusively on material from Behold Electric Guitar and cover versions to keep the crowd happy. And happy they certainly were, whatever their pre-gig expectations. Paul Gilbert is not just a terrific guitar player, but a fantastic entertainer too as he dominates the stage and provides a host of phenomenal tricks and solos to wow the audience.

Watching a two-hour show with no vocals just focusing on guitar work may sound like something only of interest to guitarists, but Gilbert provides a much broader appeal than this. Whilst clearly his guitar work is the main attraction, he keeps things fresh by infusing multiple techniques and genres and gives every member of the audience something to smile about.