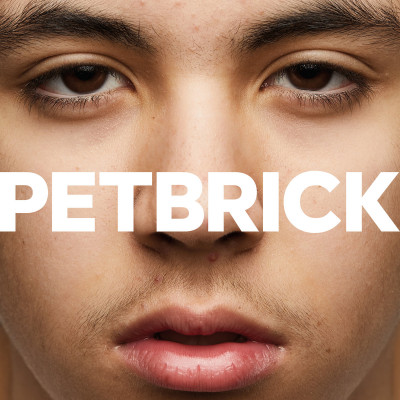 PETBRICK are the latest noise-mongers to release an album through Rocket Recordings, I is their debut long player and the band come with quite a pedigree, being Iggor Cavalera of Sepultura and Wayne Adams of Big Lad, two men with a significant background in aural terrorism.

They are not alone in this new campaign however, as the album features a cast of collaborators –  friends, colleagues and family members who lend their voices to many of the songs. The multiple vocalists, added to the numerous styles displayed does mean that I does have more of a feeling of a compilation rather than a single organic whole.

What the album does have is a solid grounding in industrial rock music, there’s little of the roaring and riffage of Sepultura or the krautrock/psych leanings of Big Lad. When I ponder on industrial rock music my thoughts are never too far from the work of Al Jourgensen and it’s fair to say PETBRICK have absorbed some of uncle Al’s deviant spirit. Two of the more enjoyable moments here recall Ministry at their brilliant, low-brow, riot-starting best – the drum and bass assault and battery of ‘Roadkill Ruby’ and the Trump-baiting ‘Gringolicker’ (see what they did there?) both pound away, wild-eyed, behind stabs of noise and po-faced vocal samples. ‘Gringolicker’, which features Mutado Pintado of Warmduscher on vocals, is darkly amusing wherein Pintado repeatedly yells “I’m gonna build a wall” as his character switches between paranoid dictator and sexual predator. Proper filth, so massive props there guys.

When the band attempt bleaker, nastier, perhaps more serious industrial tracks they are less engaging. Opener ‘Horse’ for example bangs away with very little discernible ambition or destination. It kind of reminds me of GNOD in its punky, hectoring manner, but you come away from it non-the-wiser as to what all the racket is about. Also for a band featuring a great metal drummer it has very bland, repetitive beats.

‘Radiation Facial’ (nice) which features Full of Hell’s Dylan Walker on vocals sounds like, well, a Full of Hell remix. It is blisteringly abrasive, with Walker’s raspy black metal stylings taking it to another level of downright evilness – it won’t be for everyone that’s for sure, but at least we get more interesting drumming.

Fun and frightening as much of this album is it is in the more artful and considered tracks that PETBRICK really come into their own. ‘Coming’ featuring Brazilian artist (and Iggor’s wife) Laila Leyton is a slinky, dead-eyed piece of electro-goth which builds with an almost operatic sweep under a chitter-chattering insect jungle noises and haunting synths. A real grower.

Both ‘Dr Blair’ and ‘Sect’ create very filmic atmospheres and are excellent. If they make yet another Terminator film then the pulsing menace of ‘Dr Blair’ should definitely be the closing music, whilst ‘Sect’ is like a movie in itself. The beats and vocals build ominously, again GNOD are recalled in the chippy, anarchic atmosphere but is aligned to a grander vista like the darker, later work of UNKLE – as a dystopian nightmare plain is explored.

I is a fascinating album, if at times hard work. The typical nihilism and rage associated with this type of music being very much present it is not one for sun-dappled afternoons on the patio. It is never Pimms o’clock for PETBRICK. However, when you need a good invigorating shower of filth and fury then I very much hits the spot.