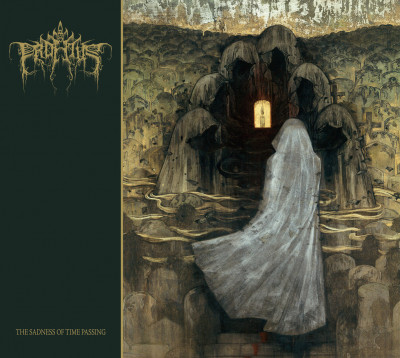 The Sadness of Time Passing by Profetus

What’s striking about the Finnish funeral doom template (achingly slow tempo, low hollow guttural vocals, smashing but spacious riffs, doomy organ) is that there are several bands who stick to it fairly religiously but it doesn’t get boring. Original masters Skepticism and Thergothon, and more recent contributors Tyranny and Shape of Despair have all made great records in this style, and, following a similar path but up there with the best is Profetus, who return with new full-length The Sadness of Time Passing.

The riffs are lumbering but the sustained drama of the organ tones keeps it absorbingly tense, the lead guitar is well-judged in contributing some searing lines, and the vocals are astonishing beastly howls. Ancient trees falling, icebergs toppling into the ocean, molten rock crackling as it cools, it’s difficult to imagine a more impressively epic way of crashing about. As is key in music of such tempo, it’s all about a mixture of anticipation and texture in keeping the slowness interesting, exciting even- as here on the quieter bits breaking into choral voices on the title track or the spoken word sombreness on the next track ‘Nostalgia’. You’ll see from these track titles the emotional colour of the record.

The vocals are hollow and desolate even by the standards of this subgenre to plumb absurdly cavernous depths. The empty echoes as on ‘Momentary Burial’ echo so emptily that you get a sore throat just by listening, vocal cords tortuously stretched on the rack of atmospheric doom slow lowness. The ghostly spirit of post-black metal drifts across the back of the stage in ‘Northern Crown’, a kind of greyed out shriek that adds a further jolt of intensity to the smeared tones and molten riffs. A record that resonates sorrowfully like giant, sorrowful funeral for an ocean or mountain.