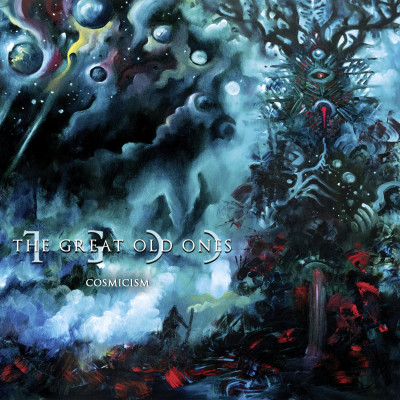 Cosmicism by The Great Old Ones

The Great Old Ones concoct another collection of rites in homage to Cthulhu. The new album Cosmicism begins with an intro track of whimsical but creepy intricate harmonies, with small rhythmic flourishes that show a careful ear for conjuring strangeness. There’s a potent brew at the beginning of ‘The Omniscient’, guitars chugging and chiming ominously while the percussion itches to tell of the eldritch eruption to come. By the time the vocals come in, distinctive from their previous records, the wall of storming sound is in full force. This gives way to a more tidal sweep of riffs back and forth, then an almost-action-movie excitement to the riffs.

Alongside the black metal croakscreech, there’s whispering cultists in this track and moaning ritual groaners in the next one ‘Of Dementia’, which matches frenetic sections with a hearty chug… all in all an impressive grab bag of metal effects for the first couple of tracks proper. ‘Lost Carcosa’ has a jangling intro reminiscent of the first record’s harmonic pickings, but after riffs that would fit into that period, the track breaks into a significantly faster attack than I’ve heard from this band before which nevertheless fits the careening feel of a world ready to tip into strange horror. ‘A Thousand Young’ has a similarly ripping pace, with drums always interjecting extra fills into the main propulsive rhythm. It’s a complex, sprawling track, the longest on the album at over 11 minutes, developing from fast fury to its later, more nostalgic epic sections.

The final pair of songs closing out the record contain some more great riffing, the horror vision of ‘Dreams of Nuclear Chaos’ and then most notably the main monotonous hymn in the album’s closer ‘Nyarlathotep’, providing a basis over which dread incantations can be gargled. All in all, an excellent new step for the band, extending their previous accomplishments with a noticeably complex, faster interlocking riffs matched to the existing harmonic intensity and sinisterly animated drumming, all serving to crowbar open the portals and let the elder gods in.