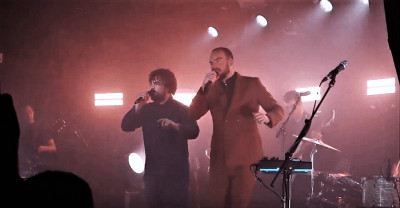 De Staat at The Garage, London

De Staat have to be one of the most incredible yet difficult to describe groups I have come across since discovering their music a little over three years ago. A fusion of alt-rock, fuzzing synth and European folk-like melodies folded into some seriously heavy thudding club beats that make them almost impossible not to dance to.

After missing two previous London shows in succession, my sheer determination to see them perform was at long last satisfied. The night is what can only describe as an absolute belter of gig at The Garage, London.


I arrived to an already packed venue full of excitable fans clearly all in the mood for something spectacular. I assumed I would have 20 minutes or so to grab a drink and lose my winter layers, and took my place in the bar queue. All of a sudden I was forced out of my gig-punter-prep haze with a great roar from the crowd and then the definitive bouncing, pulsing, deep fuzzy electronic sound that is the foundation for De Staat’s music. They were starting a half an hour earlier than expected, meaning we were in for a real treat of a 90 minute set.


I abandoned the queue, stuffed my coat into my bag and jumped into the crowd. For this, I wanted to be right at the front.

The set-list for the night spanned most of their discography including some of my all time favourites: ‘Peptalk’, ‘Baby’, ‘Help Yourself’ and ‘Get on Screen’ from O, ‘Input Source Select’ and ‘Witch Doctor’ from I_Con and the astonishing ‘Kitty Kitty’ from their most recent album Bubblegum. I appreciated the fact that they were curating the set to new fans and old by playing such an eclectic range. The sound and the acoustics within The Garage were nothing short of perfect for this show alongside some incredible, slightly blinding pulsing lights working as a backdrop in time with the band. De Staat transitioned effortlessly from one song to another, only breaking briefly for charismatic lead vocalist Torre Florim to hype up the crowd even more before diving right back in.

A real highlight of the evening was ‘Get on Screen’, played around halfway through the set, which seemed to get even the people at the furthest reaches of the venue up and dancing. This was swiftly followed by ‘Witch Doctor’, that quite literally span the audience into a fever. Every punter on the floor joined in a re-enactment of De Staat’s ‘Witch Doctor’ video, creating this huge swirling, dancing conga-line-cum-circle-pit of bodies, arms and legs that kept bounding around for the whole song. With a capacity of 600 people in The Garage, it is no exaggeration to say that I have not been part of such a fully invested crowd of gig-goers in a very long time. The buzzing atmosphere struck just the right balance of feeling like a sell-out show without being too cramped or claustrophobic.

One of the final tracks for the evening was ‘Kitty Kitty’, which I had been desperate to see live ever since it’s release earlier in the year, and I was not disappointed. After nearly 90 minutes of jumping, clapping, dancing, screaming and yelling along to everything, I managed to find some sort of reserve energy to really get down and groove to that final immense bass drop in the last few minutes.

Overall, it was one of the most fun gig nights I’ve been to in a long time and vastly surpassed my expectations. De Staat performed impeccably and left the whole crowd baying for more. I would recommend anyone wanting to shake of the cobwebs and do some serious grooving, to go and see De Staat next time they play in town. I promise it will be so worth it.