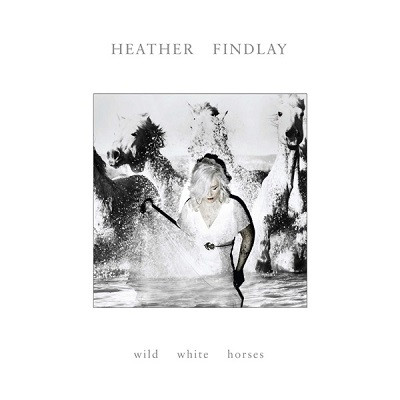 Heather Findlay has made a name for herself of being one of the original members of the progressive rock group, Mostly Autumn since she joined the band in 1995. In 2010, she announced that she was leaving the band to focus to being both as a solo artist and starting a family. She performed with the band for the last time on April 2nd that same year that was recorded for a 2-CD and DVD release entitled, That Night in Leamington.

Alongside her work with Mostly Autumn, she’s worked with Angela Gordon on Odin Dragonfly, she released her first EP entitled, The Phoenix Suite, and working with her musical partner, guitarist Chris Johnson. This year, Heather has finally released her first solo album entitled Wild White Horses. Released on the Black Sand label, Heather Findlay goes beyond the progressive genre with a diverse sound.

In an interview this year that she did on September 5th with Myki Angeline on The Women’s International Music Network website, Myki asked her about the album’s diverse collection of songs that outlined her musical journey. Heather replied, “Given that my tastes in music and the styles in which I sing and write are pretty diverse, the songs naturally cross over into multiple genres from Country and Blues to Folk and Hard Rock. Even hints of my love for India make an appearance. So I think you definitely get a feel for who I am by listening to this record.”

And Wild White Horses is going to be one of those albums that will grow on you. Yes it’s very different from her humble beginnings, but she’s poured out her heart and soul to make this album. And with help from producer and writer Luke Morley, Troy Donockley of Nightwish, Thunder vocalist Danny Bowes, and Jethro Tull’s Ian Anderson, they lend Heather a helping hand to reach that shining light by guiding her to the next chapter in her story.

‘Here’s To You’ and ‘Just A Woman’ gives Heather’s nod to three of the icons that are on those two tracks; Linda Ronstadt, The Eagles, and the Degüello-era of ZZ Top. It goes through the sound of Country Rock, from driving down the deserted highway that she rides in a red Cadillac from the heart of Nashville to the Joshua tree national park. Then going into a Blues shuffling rock groove as Danny Bowes channels the styles of a Daryl Hall in a hard-bluesy rock kind of version

‘Face In The Sun’ is Heather’s return to the heart of India. She guides this spiritual meditation that goes far beyond throughout this mysterious landscape with droning sitars, acoustic guitars, and the Tabla to give the listener a sense of walking through the landscapes of this beautiful location to discover its true identity. ‘I Remember’ is Celtic Folk where Findlay returns to her roots. She hasn’t forgotten her background by keeping it inside her pocket and releasing to the skies and let it fly. The mid-tempo workout on ‘Winner’ gives her a chance to wake up to see the sun rise before Ian’s flute gets her going for another drive around the country with some rocking guitar lines that go from minor to major chords throughout the song.

‘Firefly’ has Luke going to the piano as he gives Heather a chance to return home after a long-awaited break for the adventures she has taken. She has finally spread her wings to rise upwards and be free with some beautiful arrangements done in the style of Diana Ross’ ‘If We Hold on Together.’

Wild White Horses took me a while to get into. And it is a very good album from Heather Findlay. Now understand, not everyone is going to like the direction that she’s going through. And while as I’ve mentioned earlier it has a diverse sound and giving her wings to be spread and fly, this album can bring greater powers to life as she continues to keep her music growing more and more.