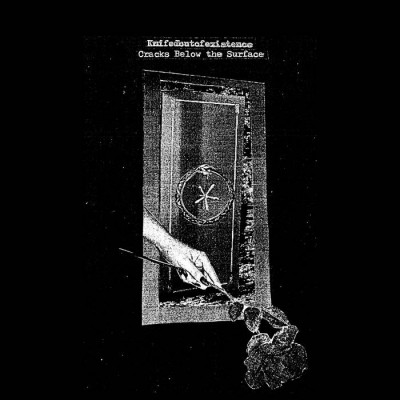 Cracks Below the Surface by Knifedoutofexistence

I am still on hiatus from writing for Echoes and Dust, but I decided to dip back in to try and get some new listeners to this album; Cracks Below the Surface is the new release from Knivedoutofexistence.

As someone who experiences regular sleep deprivation and mind-numbing intoxication on a regular basis, this album provides a perfect balance of sedately, friendly buzzing and humanising abrasion. It feels like trying hard to stay awake, against your better judgement. The world crackling and flickering like a candle in your periphery. Distant screams echoing somewhere further afield. All the while, there’s an atmosphere, like you’re sat in the kitchen listening to the appliances calmly fulfilling their functions. Like you’re contemplating your own sentience or you’re just synchronising with the machinery around you, about to head into work, another day, heading out and switching off.

Mechanical animals, automated existence. Punch in, punch out. Service with smile. Switch off, carry on, as long as the bills are getting paid. The wheels keep spinning without a hitch. Day and night blurs together, though, this first track is called ‘Nocturnal Contrast’, I can’t help but feel like at its core it holds this strong sense of time standing still, while the subjects has recurring thoughts of escape, but flutters back and forth into acceptance like an insect under a glass.

‘Cohabit’ and ‘Tears Over Fresh Make Up’ take jolting roles in the album, like stepping out into the cold or someone shouting your name, the kettle boiling over, glass carving open your finger. Sudden alertness. The beauty of this album is it’s ability to soothe the listener, whilst being incredibly unpleasant.To me that’s a hallmark of a well-produced noise record. It gives me the same feeling as being in bed at night whilst it rains heavily outside. I can hear the storm, but I’m safe, divorced from its barbs. Outside of its reach, but immersed in its grace. There’s definitely elements that are very industrial and evocative of musique concrete as well for what it’s worth, but rather than going in like a Test Dept. direction, it’s firmly a noise album or a really heavy ambient album…but, I digress.

The last track on the album ‘Empty Vaults’ is quite pretty in a very unusual way. It’s something about the choral background synths/vocals/samples clashing against crushed, noisy screams and sprawling mechanics. It’s like a ballerina dancing in a wasteland as a burning train passes by and there’s one passenger left alive… And they want to be in the snow, in the wasteland, but they’re trapped, the ballerina dances with a veil and doesn’t see anything, just calmly listens to the distant passing of a train – I feel as though this might be because the noise does not step too heavily on the melody, each thing is allowed it’s own space.

Cracks Below the Surface is an excellent noise album, that dead-eyed commuters and nocturnal voidlings will surely enjoy as a satisfying aid to a cerebral black hole.