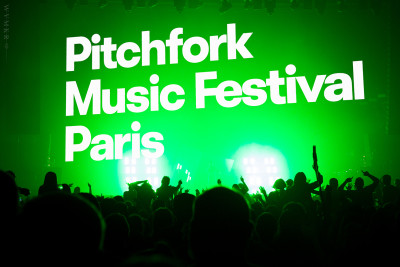 As we reach the mid-point of November, memories of Pitchfork Music Festival Paris remain nested cosily, metaphorically “chillin’” on the living room couch of my spacious but sparsely furnished consciousness. Though this was my second consecutive time at the festival, I had prepared myself for this exhibition fully aware of how little I could count on initial expectations to guide me through the weekend.

Pitchfork Music Festival, having merged with the Avant-Garde warm-up festival dedicated to smaller artists, delivered on its ever-reiterated promise to return bigger and better with the addition of two additional stages reserved for lesser-known acts in the indie music sphere. This obviously entailed set-time clashes, though this standard issue turned out less problematic than the access to the two smaller stages, namely the Petite Halle, which struggled to accommodate the space for even the smallest portion of such a large festival crowd. For this reason, the largest majority of my focus ended up redirected towards the Grande Halle and the Nef the two main stages. Although consolidated into one with Pitchfork Avant-Garde Festival, Pitchfork Music Festival clearly saw its line-up and audience split into two distinct demographics. With Thursday’s programme including the overwhelming majority of hip-hop, grime and “urban” music from France and the UK, my first day of the festival was spent with a large number of pumped-up one-day attendees returning home via Eurostar the next morning. 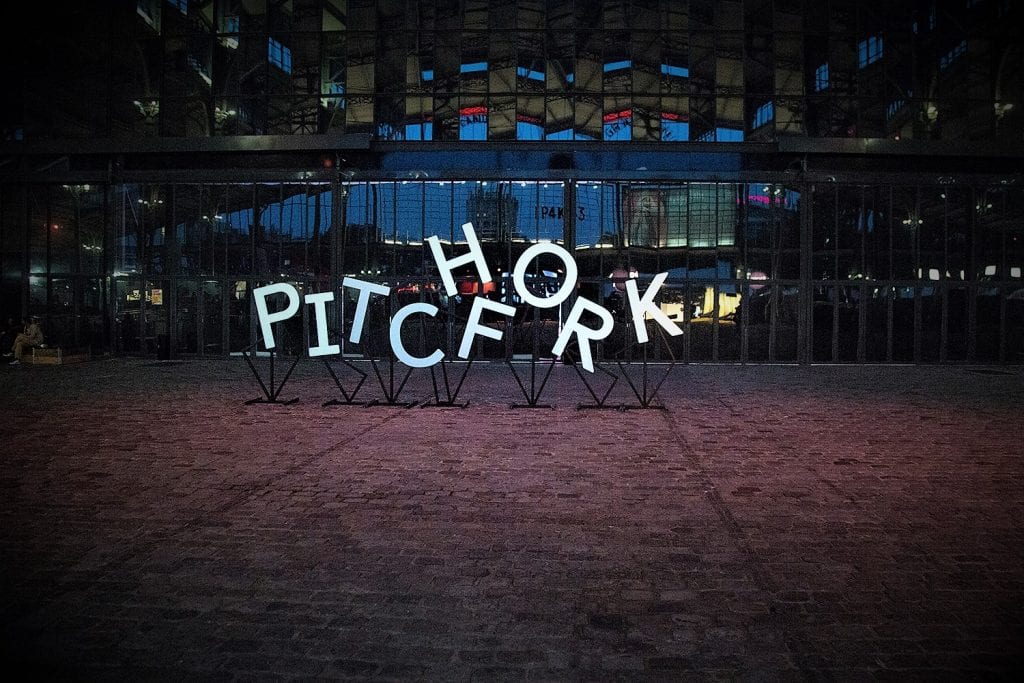 Day One got things started with a remarkable series of sets, beginning with Duendita’s R’n’B meets art-pop show in the “Studio” venue and Dublin’s Kojaque spitting bars and uppercutting punchlines with his partners in rhyme to the sounds of slick beats topped off with some live saxophone drizzled on top. As one of the only acts on Thursday to feature a full band, EZRA Collective left their mark with one of the best live performances of the weekend – a solid set of sensational sounds scintillating with the slickest style you’ve ever seen. Drawing from the likes of Bebop, Afrobeat, Neo-Soul and a proudly professed devotion to Afrofuturist Jazz-guru Sun Ra, the EZRA collective from London had the whole room jumping, jamming and grooving with all inhibitions let loose. 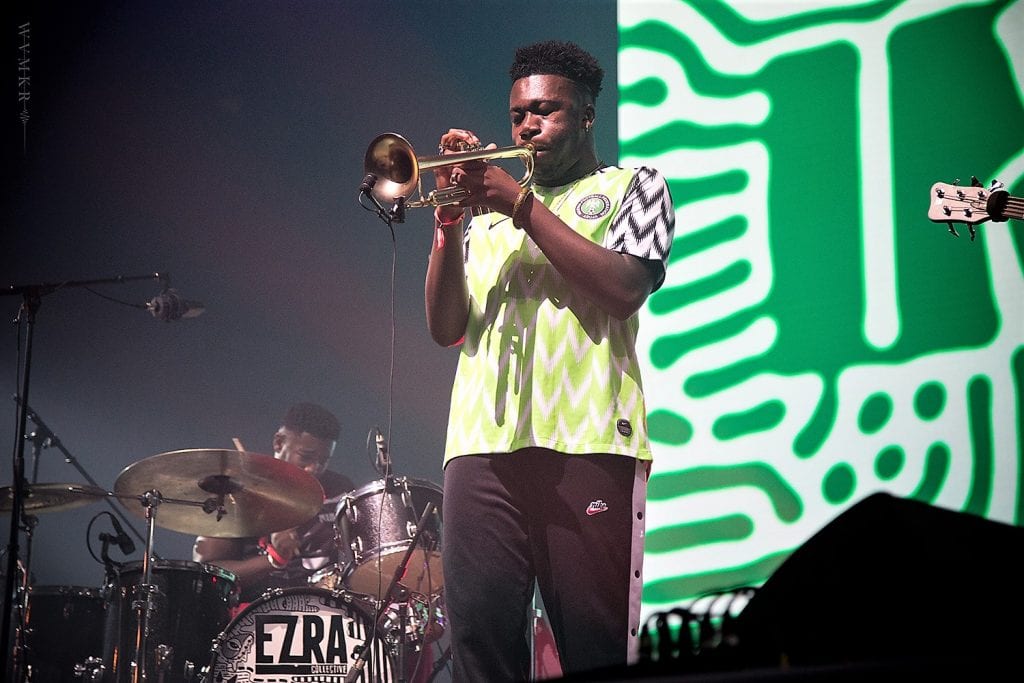 Slowthai followed directly after EZRA Collective’s set on the main stage and conquered the crowd with an explosive set on the gorgeous Nef stage at the opposite end of the venue. Jumping onto the stage with a Jason hockey mask, the Northampton bad boy had the pit boiling from the get-go and kept the energy levels to eleven all throughout his live show with his insolent, rabid grime bangers and his stage guests, which included his Emcee, a crowdsurfing bunny and even Skepta! 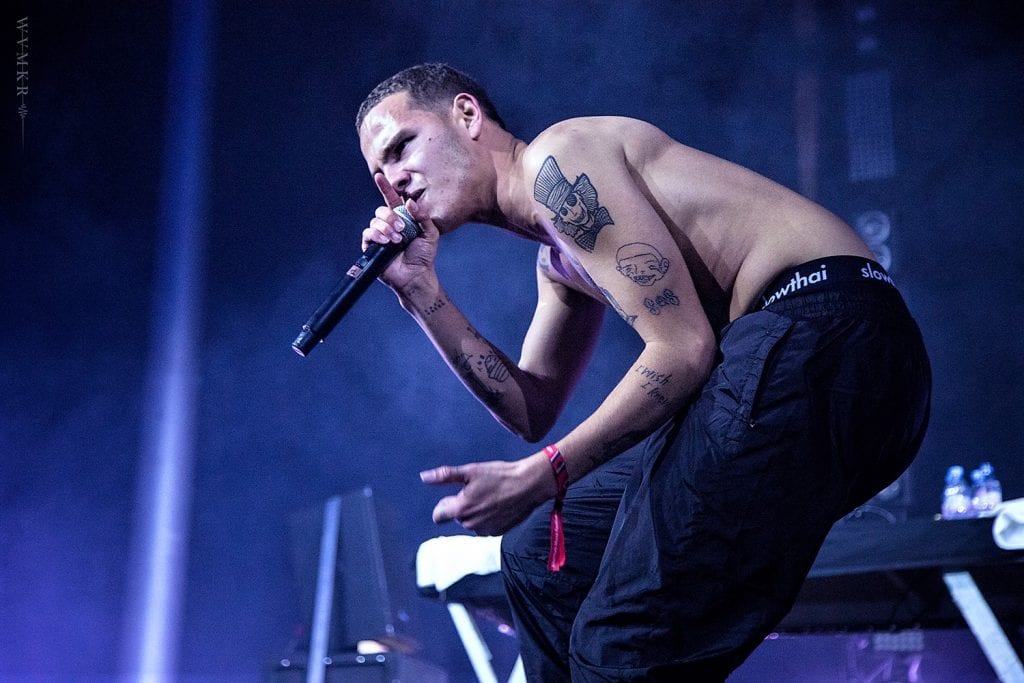 Alex Crossan aka Mura Masa dished out the most eclectic set of the evening with the help of his musical guests Bonzai, Fliss and Slowthai on vocals, swerving seamlessly between grooves for sweet R’n’B melodies and heavy bars.

Torn between two clashing sets I had been looking forward to, I made my way towards the Studio near the end of Kojey Radical’s set. What I found was no more a venue but a jam-packed sauna, oven-baking mayhem in its purest form. Much like JPEGMAFIA at Pitchfork Avant-Garde the previous year, Mr Radical had turned the seated venue upside down with his insane energy and supercharged funk-rap cuts. 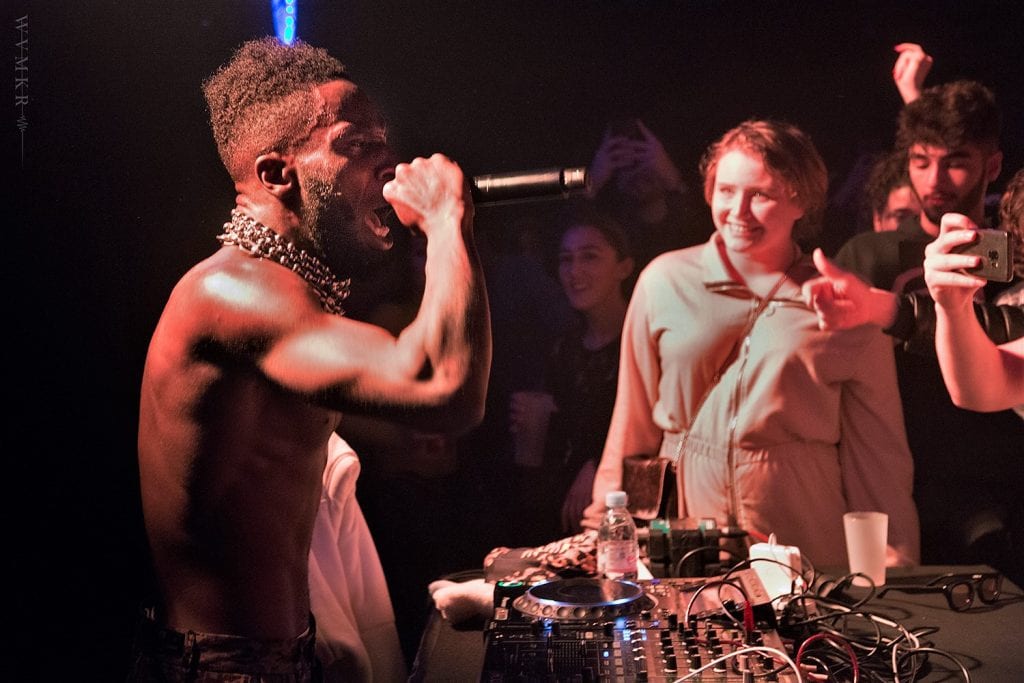 As the headlining act, Skepta had a tough act to follow but delivered a solid set on the main stage, repping his chart-topping Ignorance is Bliss to a large crowd of fans from both ends of the English Channel.

Day number two at Pitchfork Festival thus picked up where the previous year had left off with its roster of angsty indie pop-rock and synthpop acts. Though I had some high hopes for a handful of artists playing on Friday, this second day quite obviously featured most of the weakest acts we’d see all weekend. Barrie from New York kept the atmosphere at room temperature with their over-the-counter generic indie-pop-rock fix, whereas Johnny Jewel’s Desire and Chromatics both provided beautiful visuals and poses for social-media photos that failed to make up for the flat live sound and poor vocal performance. 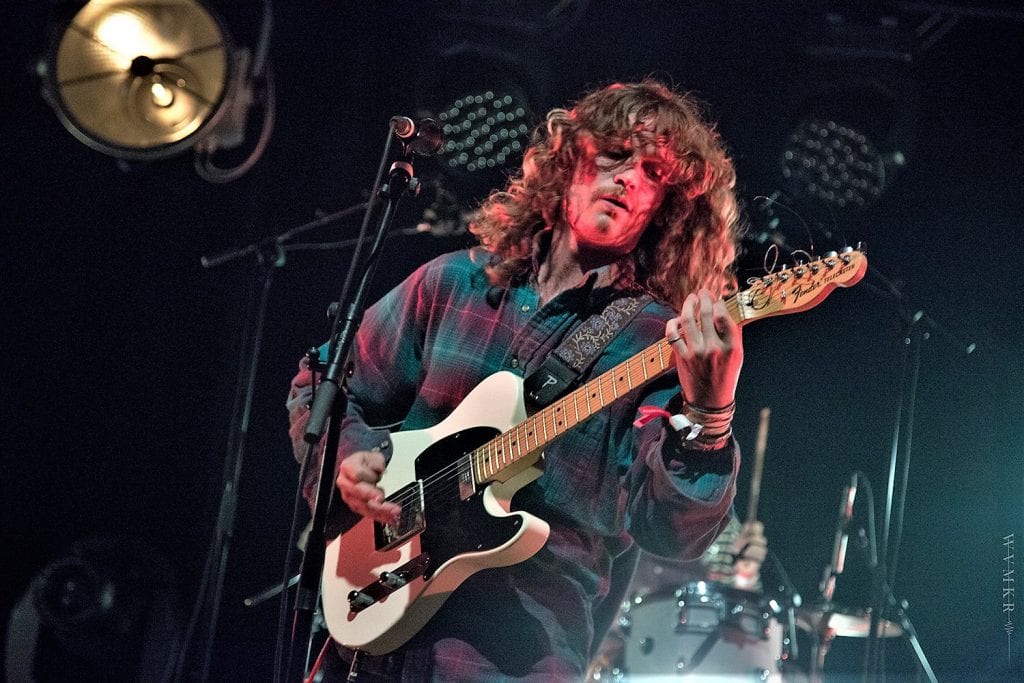 On the other hand, Briston Maroney opened up the Studio with a strong case to defend through the medium of good ole fuzzy guitar distortion and drums. Briston Maroney is what you get if a 70s’ hard-rock frontman travelled into the future to jam with a bunch of kids in a garage rock band in the 90s’. My second pleasant surprise came with Jackie Mendoza’s hazy, tribal synthpop from outer-space, both pretty and imposing, sweet yet ferocious. 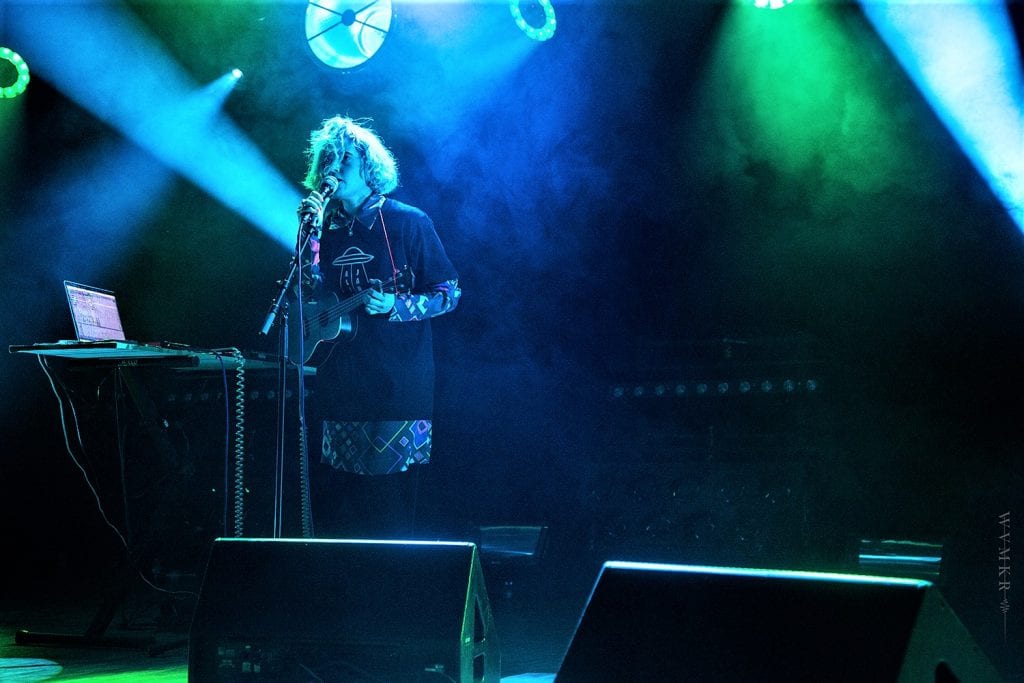 Amongst the top artist performances for Friday evening, we had Primal Scream, who dazzled and amazed with their steady delivery of rocking, dance-friendly grooves and vibrant stage show of epileptic colours and colourful costumes. Fifty-seven-year-old Bobby Gillespie has still got the energy of a frontman half his age, and Andrew Innes’ twangy guitar licks still sound as fresh as anything I’ve heard all weekend. 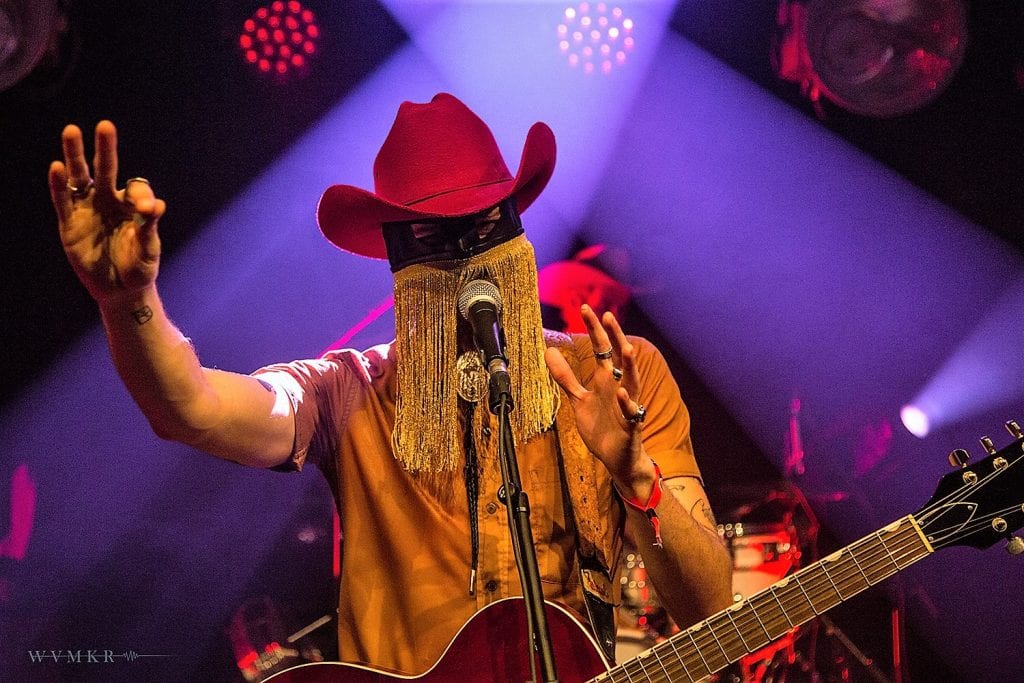 Last but not least, the charismatic queer cowboy, Orville Peck, took the crown for the second evening at Pitchfork Festival with a breathtaking live performance that turned the Studio into a full-blown saloon in the deep American south.

Luckily for those who shared my disappointment in some of Friday’s performances, the third day at Pitchfork Music Festival came with a large serving of heavy hitting-sets, prefaced by  a complementary double serving of top-notch, sensual RnB by Aeris Roves and Jamila Woods. 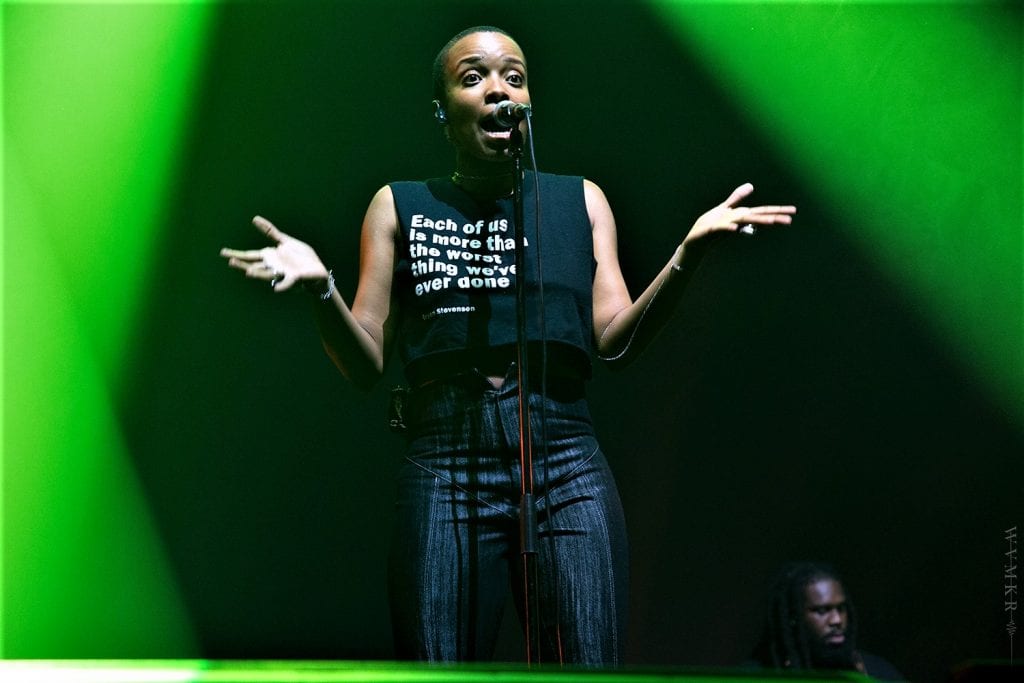 Caroline Polachek made a remarkable live debut showcasing her enigmatic, phantasmagoric world, brought to life by a dynamic, pristine live sound and her dramatic stage presence. From her spectacular entrance with ‘The Gate’ and ‘Pang’, the former Chairlift singer set the tone and left the audience spellbound by her enchanting falsetto singing and epic synth tracks.

Charli XCX lit up the Grande Halle with an explosive show topped up with confetti and lasers, firing up the crowd right out of the gate with the hype-building anthem ‘Next Level Charli’ and putting just about every other pop singer to shame with her crazy, contagious energy and endurance. The 27-year-old popstar jumps and runs like a cabaret dancer whilst singing and rapping without missing a beat, laying track after track of pop anthems, from the Eurodance sounds of ‘Vroom Vroom’ to Icona Pop’s multi-platinum party single ‘I Love it’. 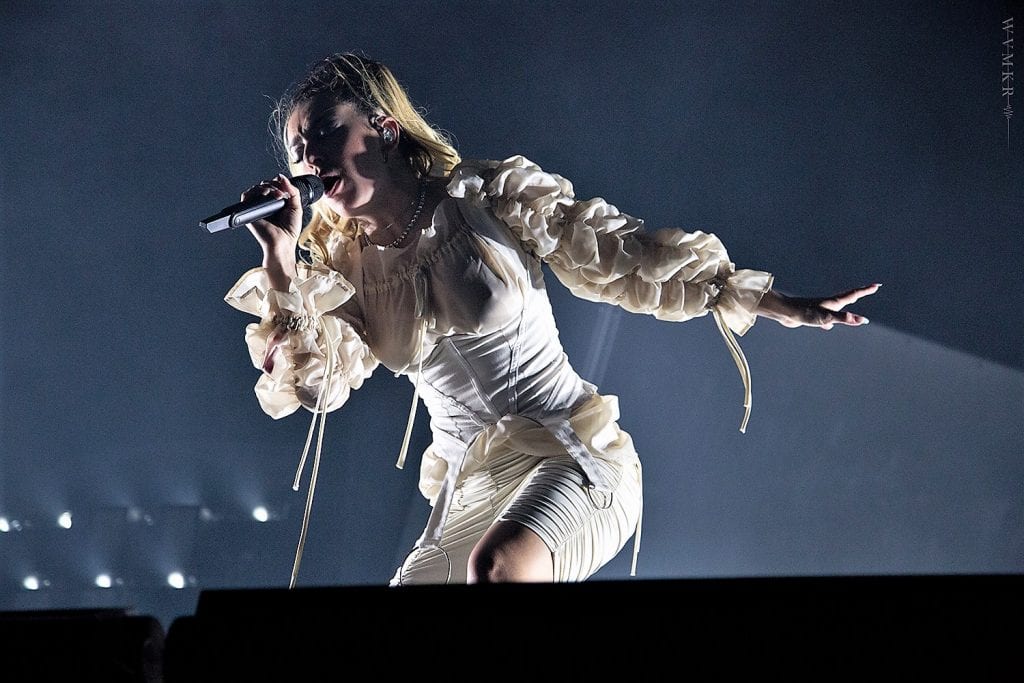 Following this spectacular show, the stunning Aurora from Norway brought her festive, tribal art-pop sound to the Nef. At only 23 years of age, the Stavanger-born singer’s creative and singing talents seem in full bloom, as demonstrated by the effortless ease with which she belts out her gorgeous melodies whilst dancing like a Norse warrior. Angelic though she may appear to be at first glance, Aurora’s mark is that of a fierce artist and a force to be reckoned with. 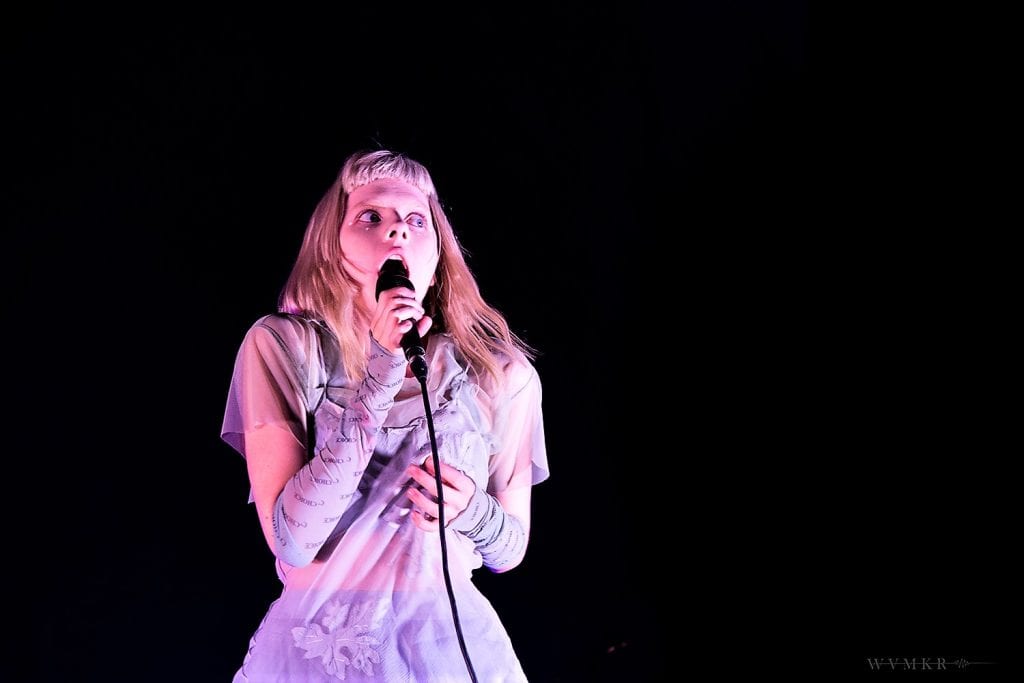 As the main headliner for this year’s Pitchfork Festival, The 1975 certainly knew how to close off a show in style. I’m pretty sure that having shiny neon-led triangle structure, a live video backdrop the size of a three-storey building and sexy backing dancers for your bands’ live show must help to grab people’s attention, but I’d be lying if I didn’t recognize Matt Healy’s talent as a performer. Stage set-up or not, it seems pretty clear that the band are stage killers. Unapologetically shooting for mainstream appeal, the Manchester quartet shoots for maximum efficiency and keep a show running at full intensity for a full hour and a half by swerving between heavy Brit rock. synthpop and New Wave. 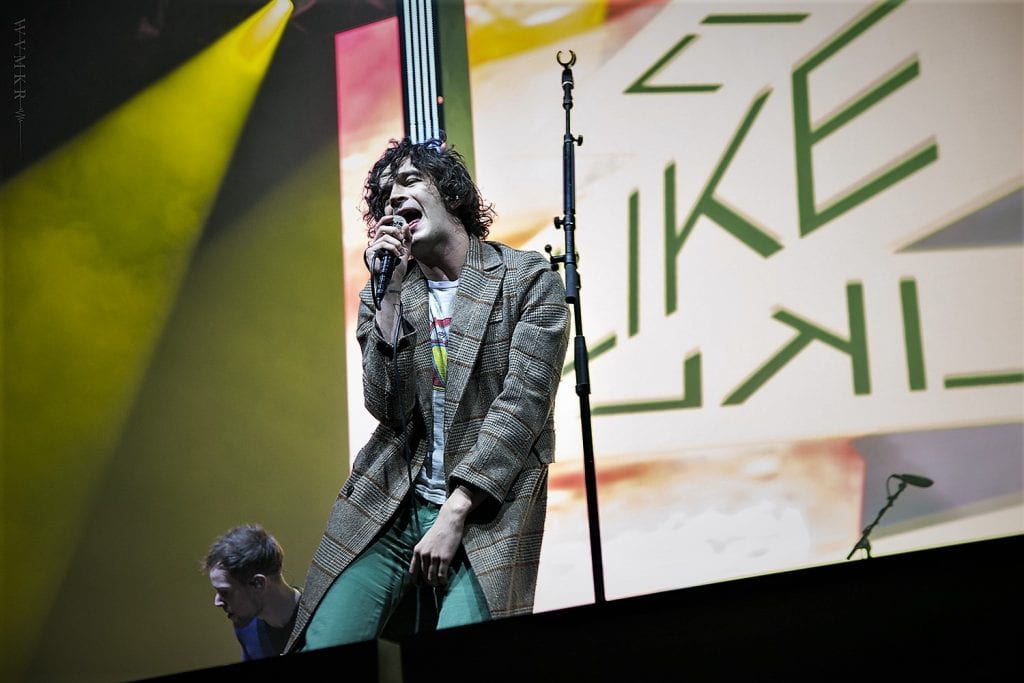 Finally, SebastiAn bulldozed his way through the venue with his destructive live set, featuring two cuts from his highly anticipated sophomore release Thirst, waging absolute chaos to the sound of blaring, overdriven basslines and pulsating beats. With classic tracks from the now essential Total and remix tracks from Kavinsky, Daft Punk, Justice and the Kills, the French Touch killer was relentless in his aggression from the very first track all the way up to his crushing rendition of Rage Against the Machine’s ‘Killing in the Name’.

Like the previous year, this 2019 edition of the Pitchfork Music Festival proved to be as exciting as it was unpredictable, a fertile ground where unmet expectations on one end are inevitably traded off with amazing discoveries found not far elsewhere. Whilst still segregated into two nearly distinct parts, Pitchfork Music Festival is slowly on track to regain the diversity it boasted in its earlier editions whilst continuing to expand; and although we’ve yet to see the return of heavy music and post-rock acts on the festival line-up, we can only hope that the positive reception towards broader inclusion will send a loud enough message for future editions. Contented and hopeful, we’ll eagerly await news of next years’ iteration. 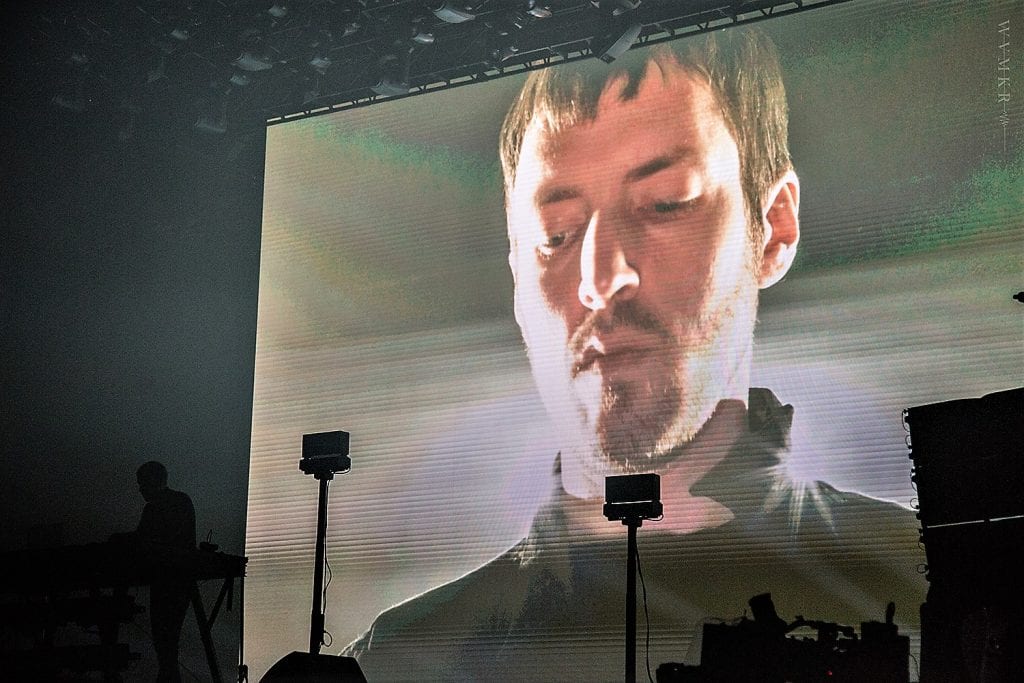