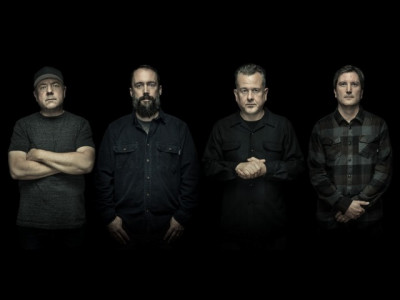 Clutch at The Roundhouse

“It’s the most wonderful time of the year. . .” Yes, that’s right, merry Clutchmas everybody!

We’re back at the Roundhouse for what’s becoming another December tradition,  the Clutch show,  in which a jolly bearded man and his helpers hand out gifts of pure rock fury.

But before we get to the main event we have two support acts to enjoy, so let’s see who Clutch have bought along in their sleigh for us this year.

Swedish power trio Kamchatka are long-time buddies of Clutch – multi-instrumentalist Per Wiberg is in King Hobo with Clutch’s drummer, Jean-Paul, so it’s no surprise to see them on the bill, or that Kamchatka share some musical DNA with the headliners. The band currently favours an over-driven rhythm and blues style, keeping it pretty simple and classic, but playing it with panache. I prefer the more upbeat numbers in their set and I find it begins to drag when the band play a classic blues – which while technically fine is rather unremarkable. Things pick up for their final number when Jean-Paul joins them on drums. No disrespect to their drummer, but when Jean-Paul sprinkles his funky glitter on the band’s sound, adding ear-catching fills and bucket-loads of swing, then Kamchatka really achieve sonic uplift.

Next up are yet more Swedes, Graveyard. (It’s a little known fact that if all Sweden’s touring rock musicians were to return home at once then their country would sink into the sea. A law was passed by King Magnus the Fictional in the Middle Ages after a particularly bloody invasion of Estonia that in order to satisfy Swedish man’s desire to conquer other lands, and to stabilise the population-size, he should take up the lute and the win hearts and minds of his neighbours, rather than behead them and take their farms. Anywho. . .)

Graveyard are oft a tricky proposition live, and I HAVE seen them before, but I’m damned if I can remember the details, which bugs me for their entire set. Across their albums, Graveyard possess some great, catchy heavy-rock numbers, but also some rather ponderous attempts at soulful blues. Early tunes like ‘From A Hole In The Wall’ and ‘Bird of Paradise’ are stirring but there is an over preponderance of slower tunes as the show progresses, and similar to Kamchatka when they play classic blues, as they do on ‘Hard Times Lovin’ I remain unconvinced that this is really their forte. What they can do well is heady proto-psych, with ‘Hisingen Blues’ and ‘Thin Line’ both sounding fresh and hot off the Jefferson Airplane, Maaaan!

So what can I say about Clutch that I haven’t said before, sometimes on this very site? Not a lot really but it bears repeating – and a few other notions occur to me whilst the band put on a typically impressive, tune-packed performance. The Frederick foursome bang out 18 numbers in a breathless 90 minutes with nary a drop in quality or intensity. Neil Fallon keeps his inter-song raps with the crowd brief to on the verge of brusque tonight, and as a consequence I do get a slight feeling that Clutch are looking forward to their Christmas break after yet another busy, sometimes taxing year.

To be clear, whatever the band’s state of mind, the level of commitment and musical dexterity are extraordinary. The range of styles and influences harnessed to create the Clutch sound at this point are incredible, not only in their range but in their seamless knitting together. Funk, hardcore, metal, stoner rock, blues, gogo, rap even, all blend into a thunderous swirling tumult that has you grooving one minute and headbanging the next. Only The Black Crowes at their peak, in my experience, managed to summon so much musical history into one spot to create such a thrilling musical communion.

It begins with ‘Burning Beard’ and the stage is thick with smoky red lights, creating a warm, fuzzy, almost comforting vibe, which perfectly matches the atmosphere you find at these annual Clutch gigs. Everybody comes to party, and in truth some have started a little too early – the floor is sea of spilt beer, but no one is angry about that, or anything, the good cheer is as abundant as the booze. Let’s not forget that this is a heavy rock show though and Clutch rock mighty hard at times. Many tunes are attacked with a Slayer-like zeal, with ‘How To Shake Hands’ and ‘Sucker For The Witch’ in particular hurtling along at what feels like double-speed!

‘In Walks Barbarella’ is a mid-point highlight, with the crowd bellowing out “weaponised funk” gleefully. I do think the live version misses the horns of the studio cut, but extra musicians are used sparingly throughout the rest of the set to add extra tones to the guitar attack. Per Wiberg, unsurprisingly, returns to add keys to ass-shaking tear-ups of  ‘10001110101’ and ‘Struck Down’.

And about that guitar attack – I’ve noted before that Clutch are a pretty static bunch onstage, Neil aside, and in the past I’ve been a tad critical about that; but tonight, from where I’m stood, facing Tim Sult, I have to take my hat off to the man. Yes, he barely moves or even raises his head, monk-like in his calm concentration. But with his every move full of purpose, he’s like a Zen master of the riff, similar in many ways to Tony Iommi.

I was lucky enough to talk to Jean-Paul before the show (and you’ll be able to read that interview here soon) and he admitted to me that the guys in the band are pretty shy, which is fairly obvious when you see them live, stood back and letting Neil Fallon roam about testifying and shaking his fists. It seems to me Clutch are a band of introverts in thrall to the power of rock ‘n’ roll and working in service of the extraordinary mind of their singer, helping bring his crazy visions to life.

It is not Fallon’s words that we hear, playing out in the encore though. Instead, on the night that their president is impeached, Clutch bow out with a fiery ‘Fortunate Son’, Creedence Clearwater Revival’s bilious attack on privilege and entitlement among America’s corrupt elite. It may be the holidays  and we may have been lulled into a beery bonhomie,  but this bunch of unassuming nice guys can still pack one hell of a punch. Long may these “lifers for rock ‘n’ roll” run.